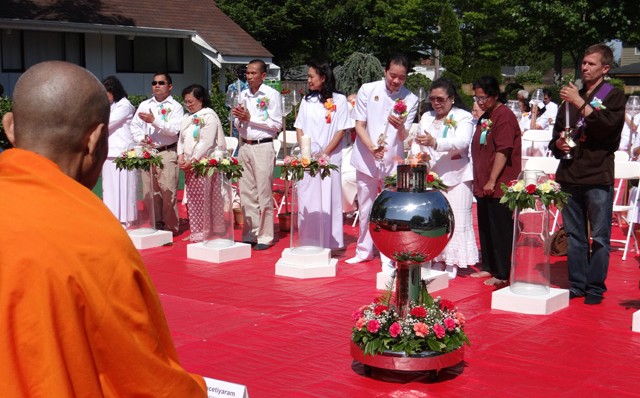 But unity was the theme of the day.

International Vesak Day brought together clergy and laypeople from 15 different Buddhist groups in the Seattle area on May 30, to celebrate the Buddha’s birth, enlightenment and passing away.

The event attracted about 25 Buddhist clergy and 70 laypeople to the Seattle Meditation Center in Mountlake Terrace, Washington, for chanting, meditation and candle lighting, on a warm, sunny Saturday. The event was co-sponsored by Northwest Dharma Association. 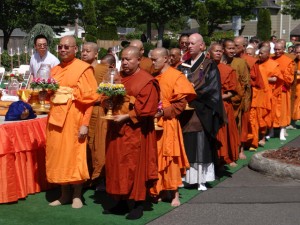 The brightness of the day was colored by the oranges, reds, blacks and browns of the robes of Buddhist clergy, among the white attire of Thai Dhammakaya lay people, hosts at their home temple.

Outside, a 40-foot long, eight-foot tall orange banner with the Buddha’s image, draped over the white walls of the center’s office and classrooms. Inside the chapel were chairs for laypeople and mats for monks, on a stage under a gold, backlit Buddha statue.

Wearing the orange robes of Thai Theravada monks, Venerable Manikanto Bhikku, abbot of the Seattle Meditation Center, welcomed the Buddhist clergy and laypeople to the celebration. He said he hopes the Buddha’s teaching will be “like the sun that spreads light to the world.”

Phraku Sithdidhamvidesa Bhikkhu, abbot of the Atammayatarama Temple in Woodinville, expressed his appreciation for the rare gathering of different Buddhist groups. “We need to join together,” he said.

Wearing the dark red robes of Tibetan monks, Lama Migma of the Sakya Monastery in Seattle’s Greenwood neighborhood, chanted in low, sonorous tones in praise of the lord Buddha. 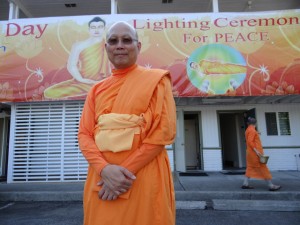 Venerable Phrakhu Manikanto Bhikkhu, abbot of the Seattle Meditation Center, beams happily. He said, “I feel great to see other monks from different temples gather together for this kind of ceremony to pay our respects to the Buddha.”

After a large group of Thai Theravada monks chanted in harmony, Venerable Manikanto Bhikku led the group in meditation, inviting everyone to picture the Buddha at their center. Then laypeople made offerings to the monks, candles were lit, and the group walked outside, where monks from different groups shared in the lighting of shining, silver torches, and laypeople lit white candles on gold-colored stands.

Under the glare of the afternoon sun, everyone held candles and walked in procession, circling three times on a path of red carpet. Then, the group returned to the chapel, where everyone meditated on spreading loving kindness to the community, the city, the world and the universe. The ceremony ended with a group picture.

Although the differences between Buddhist groups were apparent in the chanting and robes of the clergy, similarities went unstated. Venerable Pormov Dhammathito Bhikkhu, an event organizer, said the Vesak day celebration emphasized an underlying unity within the diversity of various Buddhist practices. “It’s like one tree with many branches and many leaves,” he said. 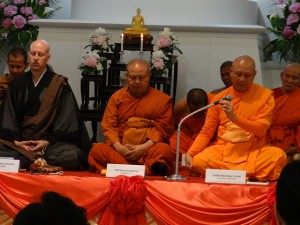 “I’m so happy to see everyone come to join the ceremony,” said Venerable Dhammathito Bhikkhu, who ordained in the Dhammakaya tradition as a boy in Cambodia. “We dedicated this ceremony to pay homage to our same father. Even though we are from different temples, we have one goal to serve the people and gain enlightenment.”

Shonin stood out as an American wearing the black robes of the Japanese Nicheren Shonin sect. He said his exploration of Buddhism started in his childhood. At age nine, he began a contemplative practice even before he knew the word “meditation.” At age 16, on a trip to Japan to study martial arts, he met a monk. He was impressed with his humility and compassion. 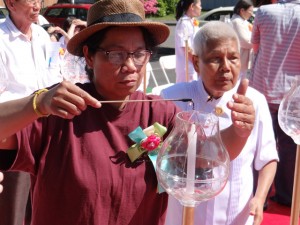 A person, unnamed, lights a candle at the ceremony. On the right is Supawadee Davis, from the Seattle Meditation Center.

“The day I graduated from high school, when I was 18, I thought, ‘What kind of a person do I want to be?’ And I thought of that monk.”

From Buffalo, New York, he travelled to a Chinese Buddhist temple in Toronto, Canada, where he asked to be ordained. “It wasn’t that I wanted to escape what I came from, but I wanted freedom … freedom not to be ruled by fear,” he said. “That’s what Buddhism gave me.”

Rev. Gengko Kathy Blackman, a married American reverend at Dai Bai Zan Cho Bo Zen Ji Temple on Beacon Hill in Seattle, was born and raised as a Quaker, but found herself drawn to the teachings of Zen master Genki Takabayashi Roshi.

“I didn’t think about being a woman when I asked if he would ordain me, and he agreed, saying he had been waiting for me to ask,” she said. “I have never regretted it.” 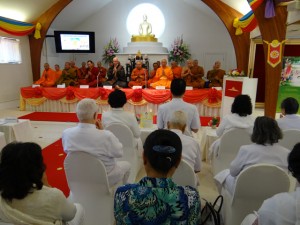 Buddhist clergy and laypeople from around the Seattle area gathered for meditation and chanting inside the chapel at the Seattle Meditation Center to celebrate International Vesak Day.

Most laypeople at the event were associated with the Seattle Meditation Center, a branch of the Dhammakaya Foundation in Thailand. The display of diverse traditions within the Buddhist clergy prompted at least one member to shake his head and remark “interesting, very interesting.”

Harry Ryan, a retired Shoreline resident who attends meditation classes at the temple, said he enjoyed the ceremony: “The thing I liked the best was the simplicity of it. It wasn’t complicated. It wasn’t overly ornate or austere. It was probably the most simplistic form of meditation.”

Rev. Guo Cheen, who attended the ceremony on behalf of the Northwest Dharma Association, remarked that the event was “brimming over with a generosity of spirit and a deep regard for our teacher Shakyamuni Buddha.”

“I feel great to see other monks from different temples,” she said. “Gather together for this kind of ceremony to pay our respects to the Buddha.”

0
SHARES
Share
Posted Under: 2015, NWDA News, Summer
About the Author: Bob Baumgartner
After working in small newspapers near Seattle, Bob Baumgartner moved to Taiwan, where he taught English, studied Chinese, and was the first foreigner to earn an MBA at Cheng Kung University, Tainan. He now works in testing at Microsoft for Wipro, an Indian multinational company. On the weekends, you might find him at the Seattle Meditation Center.