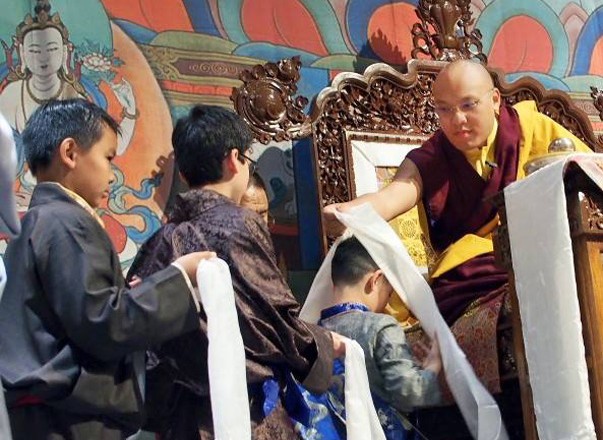 Children from the Tibetan Association of Washington sang for the Karmapa and then lined up to offer katas during an event at Lynnwood Convention Center.
Photos by: Nirzhar Pradhan, Kurt Smith, & Scott Pownall

The greatest legacy of the recent cross-country tour by the 17th Karmapa, Ogyen Trinley Dorje, could be his connection with American youth and young adults.

The charismatic spiritual leader, whom many feel is being groomed to succeed the aging Dalai Lama as the public face of Free Tibet, resonated strongly with students with his focus on modern issues such as compassionate race relations, the sacredness of our natural environment, the empowerment of women, and equal respect for gay, lesbian and transgender relationships.

When the 29-year-old Karmapa arrived in Seattle – his final stop before flying home to India – the centerpiece of his May 9 public talks at Seattle Center was a dialogue with a panel of young adults who are devoting their lives to compassion projects. More than 1,500 people attended the afternoon and evening sessions.

Silas Follendorf, a young woman who does outreach work with Seattle’s homeless youth, asked the Karmapa for help dealing with the emotional pain triggered by witnessing such trauma.

“How does one go about making this kind of work sustainable? In the face of so much suffering and crisis and drama … sometime I feel like my heart begins to shut down, and I want to take a step back and leave everyone at arm’s length,” said Follendorf, who works with YouthCare. “Sometimes running away feels like it’s the only viable option for survival.”

The Karmapa, who escaped from Chinese-occupied Tibet at age 14 without his family, understands how painful life can be for young people.

“The work you are doing is very meaningful work, that’s bringing direct benefit and really directly sparking an experience of happiness for these people,” he told her. “When we see this we naturally all feel joy in our hearts, and it’s really important to take a moment and appreciate that, and allow that to become a sustenance for us. 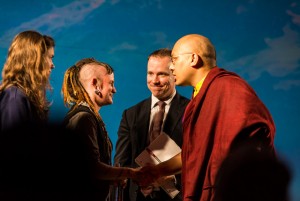 The Karmpa greeting young members of the youth panel.

“Because after all, if our hand isn’t warm, we won’t be able to warm someone else’s hand by grabbing them. So if we want to warm someone else up, we have to become warm ourselves,” he said. “Therefore we should try to appreciate and rejoice in the work that we do, along with bearing witness to the sufferings of others.”

The next day, the Karmapa held a private audience at Nalanda West with a small group of adult leaders from Seeds of Compassion, who sponsored some members of the youth panel.

Dan Kranzler, a Seeds of Compassion leader, told the Karmapa that Seattle people are strongly committed making the world a better place, especially for youth who feel overwhelmed by modern problems. Seeds of Compassion, which hosted the Dalai Lama’s 2008 visit to Seattle, wants to empower youth to step up as a new generation of leaders, he said.

Would the Karmapa consider returning next year, Kranzler asked, to participate in a youth summit? Perhaps with the Dalai Lama as well?

The Karmapa first cautioned the group that he can’t make promises about future visits, because the Indian government restricts his travel.

“I am very interested in this idea of a summit, and I would like to participate in such a gathering,” he then said. “So we should keep in touch.” 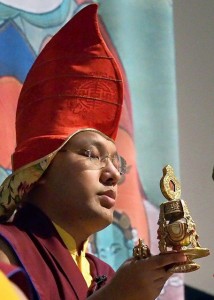 Visualizing during a tantric practice.

This was the Karmapa’s third visit to the United States, and by far his most ambitious. In 2008 he undertook his first overseas trip – an 18-day tour of Seattle, New York, and Boulder, Colorado. Indian authorities suddenly cancelled a 2010 European teaching trip, apparently due to political concerns about China. Then in 2011 both the Karmapa and the Dalai Lama flew to Washington, D.C., for the Kalachakra for World Peace.

With his solidly-built, 6-foot physique, hip attitudes, humor and technological savvy – he’s known for his Nintendo Wii, Playstation and iPod, and sometimes teaches via live web-casts – the Karmapa has dazzled audiences and the media. The New Yorker recently dubbed him “the Bieber of Buddhism,” and in 2008 the Seattle Times wrote of his “magnetic personality” and “hunky good looks of a rock star.”

Although the Karmapa offered all his Seattle-area teachings in Tibetan, translated by Nalanda West’s Tyler Dewar, his command of English seems impressive. He rarely requested Tibetan translations before responding to questions posed in English, and often sprinkled his Tibetan comments with words such as “interdependent,” “mindfulness” and ”gratitude.”

But not all Buddhists revere him as the 17th Karmapa, the head of the 900-year-old Kagyu lineage. While the Dalai Lama (head of the Gelug lineage,) the Chinese government and most Tibetans have accepted him in that role, a rival claimant – Trinley Thaye Dorje – has backers including one highly-placed Kagyu lama. Until the controversy is settled, neither of them live at India’s Rumtek Monastery, which was the seat of the 16th Karmapa in exile

During his recent Seattle visit, the Karmapa repeatedly apologized for his poor health. He originally was scheduled to arrive May 5, but when he fell ill in late April he spent five days resting in New York, and the latter part of his schedule was reconfigured. Lingering symptoms included an occasional cough, low energy and vocal limitations. 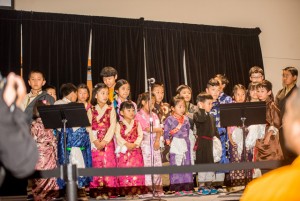 Children were a central theme in the Karmapa’s visit.

“I usually have quite a loud voice, and today it doesn’t seem to be so strong. So I am still in the process of recovering,” he told his audience at a May 8 event sponsored by the Tibetan Association of Washington.

While his Seattle public talks had a strong Western vibe, with the Karmapa seated onstage on a golden, upholstered banquette, his appearance at the Lynnwood Convention Center was highly traditional. He ascended a Tibetan throne, positioned next to a shrine and beneath a 20-foot banner adorned with a depiction of the Buddha flanked by Green Tara and White Tara. During the ceremonial program elements, he donned a tall red ritual hat and shook a pellet drum and bell.

That long-life empowerment and teaching drew an audience of about 1,300 people – mostly native Tibetan, Chinese, and Taiwanese – many of whom had traveled from Portland and Vancouver, B.C., for the opportunity.

Young people played a prominent role at that event too: Teenaged dancers garbed in traditional Tibetan ceremonial masks and clothing greeted the Karmapa when he arrived outside the venue, and a children’s choir – also in traditional clothing – sang in Tibetan with great heart at the start of the program. Both groups are part of the Seattle-based association’s Tibetan Language and Culture Class.

It was a multigenerational crowd. Babies and toddlers cried and fussed; some elderly people dozed; a few adults swirled small prayer wheels; many listened with their hands together at their hearts in anjali, or with their fingers interlaced into more complex Buddhist hand mudras.   Nuns with shaved heads and maroon robes listened with eyes closed. 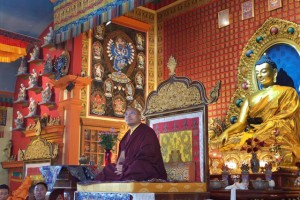 The Karmapa visited Seattle’s Sakya Monastery of Tibetan Buddhism on the morning before his May 9 public talks.

Howard Huang, 22, made the trip from Portland with his mother, who emigrated to the U.S. from Taiwan. After the ceremony ended, they were among hundreds of audience members who respectfully inspected the Karmapa’s shrine and throne, taking selfies and draping lovely katas (scarves) across his brocade-covered seat.

“I felt the power, I felt the connection. I bet everybody brought their suffering and problems and prayed, and His Holiness uplifted from the heart,” Huang said. “His presence here means so much. He gets to come here to the Western states and provide his teachings, when usually we would have to go to India, with a lot of time and expense. For a lot of people this might be a once-in-a-lifetime opportunity.”

Before bestowing the 15-minute long-life empowerment, which had been requested by the Tibetan Association, the Karmapa gave a teaching to clarify its history and purpose. This empowerment was one of two he learned as a child in Tibet, he said.

The empowerment can seem confusing in light of the Buddha’s fundamental teachings about accepting the inevitability of sickness and death, the Karmapa said.

“[Death] is not something that we should try to avoid, deny or run away from,” he said. “Rather the goal of the lama’s empowerment is to help make our lives meaningful. If we are leading a meaningful life that is devoted to accomplishing genuine benefit for ourselves and others, then it would be helpful to have as a long of a lifetime as possible.” 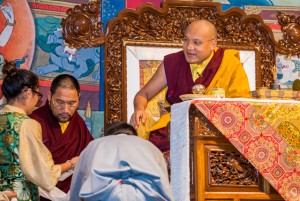 Nearly everyone from the Tibetan community gathered for teachings with the Karmapa, in Lynnwood.

That’s especially important for meat-eaters, he said, because so many sentient creatures must suffer and die, every day, just to feed us and keep us alive. Therefore, he said, “Surely you will want to make the life that we do live meaningful, and one that we can use to benefit others.”

When the empowerment and formal program ended, he delivered 18 minutes of personal comments to the crowd, speaking in Tibetan that was not translated into English.

During this visit, the Karmapa and his entourage stayed in an apartment built especially for him at Nalanda West in 2008, for his first Seattle visit. Dzogchen Ponlop Rinpoche, founder of Nalanda West, has strong ties with the Karmapa. Rinpoche’s father was general secretary for the 16th Karmapa, who prophesized the Dzogchen Ponlop Rinpoche’s birth, and who provided much of his early training.

Ponlop Rinpoche kept a very low profile during this visit, but usually could be spotted sitting front-and-center in the audiences.

“I am so happy His Holiness connected with all the different walks of life in America – from all different communities, and different ethnic groups, and different challenges,” he said, in an interview toward the end of the Karmapa’s U.S. tour.

“Especially the young people who have struggled a lot, and gone through a lot of pain, but then came out of it with a great amount of courage and love and compassion. They’re trying create a better world,” Ponlop Rinpoche said. “I am so happy we have had the opportunity to connect with that type of environment, with the basic value of America here.”

0
SHARES
Share
Posted Under: 2015, Dharma Education, Summer
About the Author: Diane Brooks
Diane Brooks has been on a Tibetan Buddhist path since 2005, studying first with Joel and Michelle Levey. In 2010 she became a student of Dzogchen Ponlop Rinpoche, and a member of Nalandabodhi’s Seattle sangha. She is a former newspaper journalist, writing for San Francisco Bay Area papers and the Seattle Times. She now balances communications work with co-teaching yoga classes at Everett Community College.