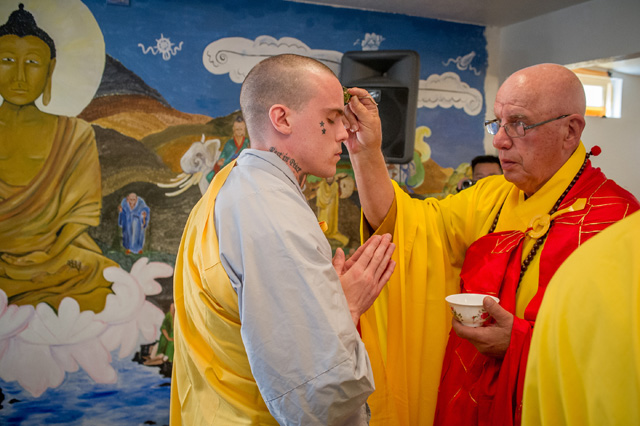 Editor’s note: After doing time for years in New Jersey prison, Chris Richards ordained as a novice monk in April, and now aspires to become a prison chaplain. 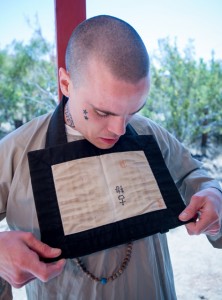 In 2011 I received a letter from Chris Richards. a prison inmate in New Jersey. Richards had sent the letter to an old address, but the Aberdeen post office figured out who it was meant for, and I got it a few months after he mailed it.

He had been in the New Jersey prison system for two years of a seven-year sentence.

“I was seeking the guidance of a teacher, specifically a Zen teacher, who would be willing to work with me both while I was inside and later when I would be released,” Richards said, telling the story of how he found Thai Kobai.

He had learned of Thai Kobai’s work with inmates from Kobai’s book “Sitting inside: Buddhist practice in American prisons.”

“I’d written similar letters all over the world,” Richards said. “I just went through the back pages of Shambhala Sun, and wrote to all the centers and monasteries I could find.” 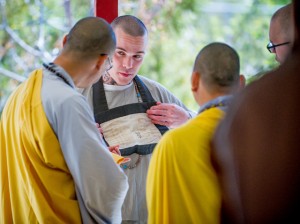 Richards shares the rakusu with others.

Only two places answered him, both saying they couldn’t help.

Richards already had taken refuge in the Buddha, dharma and sangha from Bhikku Bodhi, a leading Western-born monk and translator, who now lives in New Jersey. By taking refuge Richards had formally become Buddhist; now he was looking for a teacher.

“I remember you told me you’d be more than happy to work with me and you gave me a list of reading materials to get me started and I remember you gave me your phone number,” Richards wrote. “I was so excited!”

But experience from years of working with prisoners also suggested the potential pitfalls. 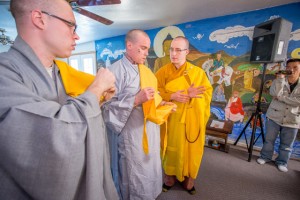 Master of ceremonies, Sunyananda Dharma, helps Richards on with his new robes called kesas. Novice Thich Tam Bi is to the left.

“You warned me not to get caught up in fantasies about what this would be like and what a monk’s life is like,” Richards said. “You said many Buddhist inmates fantasize about ordaining when they get out.”

But Richards did get out, and he traveled to Aberdeen to train for a while with Thay Kobai.

The two of us then drove to the Desert Zen Center in Southern California’s Mojave Desert, where Thay Kobai’s abbot, Thich An Giao, has scheduled a training retreat for monks in his lineage.

An Giao watched Richards carefully during the retreat and eventually agreed to ordain him a novice monk. This was accomplished during a ceremony on April 9, 2015. 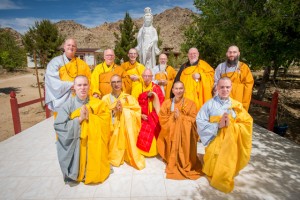 Richards then stayed in Aberdeen for another month, learning the routine at Plum Mountain Buddhist Community and helping Thay Kobai in his street ministry and other activities.

On May 10 Richards returned to New Jersey, where he will take care of his ailing father and begin working on a bachelor’s degree in religious studies.

Richards also will continue his practice in temples and centers nearby, and consult by phone and Skype with Thay Kobai.

Next April Richards will return for another training retreat in the Mojave, part of his work toward becoming a prison chaplain.

0
SHARES
Share
Posted Under: 2015, Compassionate Action, Summer
About the Author: Thay Kobai
About the author: Thay Kobai, formerly known as Scott Whitney, serves as spiritual director of the Plum Mountain Buddhist Community in Aberdeen, Washington, a small coastal city. He "Sitting Inside: Buddhist Practice in American Prisons“, and is a monk in community at Trout Lake Abbey in Trout Lake, Wash.