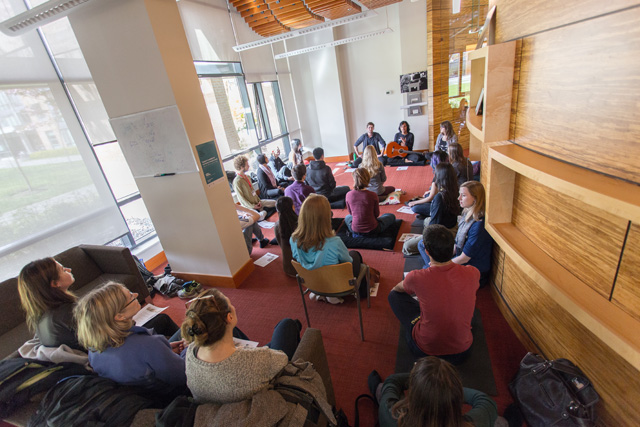 Affectionately dubbed “oh…SIT!,” the conference was a joint effort by the UBC Zen Sangha and UBC Meditation Community student club presidents, Maria Trujillo and myself, Chloë Lai. UBC is in Vancouver, British Columbia.

Our hope was to establish a space for local meditation practitioners to connect with each other, as well as to introduce newcomers to a selection of different practices. 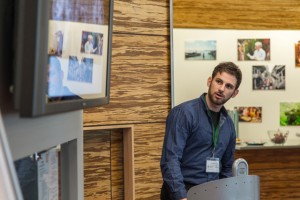 Kieran Fox giving his opening keynote speech, on awareness and responses to pain.

Having experienced the myriad benefits of meditation in our own academic and personal lives, we recognized its potential to help those who live and work within very stressful and demanding results-based environments. Nowadays, that definition applies to nearly anyone.

Presenters included leaders from the Zen, compassion cultivation, neurological research, spiritual ecology, and mindfulness communities, all of whom generously donated their time.

Long-term meditation practice does indeed influence brain structures, according to Kieran Fox, a UBC doctoral candidate in psychology, who gave the opening keynote address. In his talk Fox described research about the effects of body awareness, including increased tolerance to pain.

Participants were met by warm sunny skies when they arrived at the Simon K.Y. Lee Global Lounge that morning. The peaceful sound of the water fountains near the entrance marked the transition from outer world to inner space. 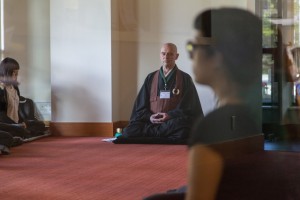 The curved wooden walls of the Global Lounge, punctuated by doorways to the north and south, as well as windows to the east, seemed to embrace its occupants. Slim planks of wood and long light fixtures, fanned out from the center of the circular ceiling.

Every seat was filled. I recognized a professor from the creative writing department, staff members from various campus organizations, and a number of fellow students. I also was happy to find that many more faces were entirely new to me.

After the opening keynote, the participants split into two groups.

Outside, on the grassy open space between the buildings, Brian Callahan, co-founder of the TruePoint mindfulness training program, led the Engaged Buddhism group. Callahan shared a three-tiered lesson in mindfulness: Rest, Recognize, Return.

First, he said, allow the mind to rest in the present moment rather than inhabiting past or future thoughts. Then, recognize when the mind has wandered, and gently return it to the present once more, without judgment. 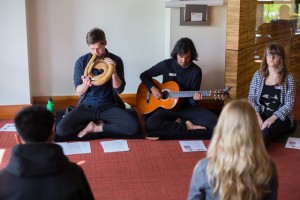 The group then did a mindful walking practice to engage with the environmental sensory stimuli. At first, people walked slowly, eyes cast down at the ground before them. Then Callahan asked them to move faster while maintaining their connection, and added, “It’s okay to smile., It’s okay to see each other!”

The emotional release was palpable; suddenly people were catching each other’s gazes with a laugh as they flowed around one another.

Meanwhile, the second group entered a quiet space behind the main room for an introduction to Zen practice. This workshop was led by Eshin Godfrey, guiding teacher of the Zen Centre of Vancouver, and assisted by E’cho Sirotnik, Zen Buddhist chaplain at UBC.

Godfrey, seated on one of the round black cushions that lined the floor of the carpeted space, explained the traditional zazen posture: legs crossed so that the knees provide a stable, grounded tripod base, and hands held to form an oval, left hand over right, with the thumbs touching gently, bringing our energy to the core of our being. 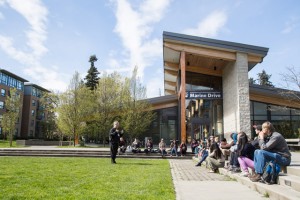 In a seemingly minor yet impactful change from most meditation practices, the eyes remain open, softly gazing downward about three feet ahead. This, Godfrey explained, was part of the relational aspect of Zen practice, cultivating not just ourselves but our connectedness to the circumstances we encounter moment-by-moment in life.

After an initial sit, Godfrey led a walking meditation. In contrast to Callahan’s workshop, where each person moved individually, here they walked in step, more than 20 bodies moving as a single entity.

During the lunch break, participants regrouped to socialize with their peers, and to interact more informally with presenters.

After lunch the spiritual ecology workshop group was guided by Maya Graves-Bacchus, a representative from the Salish Sea Spiritual Ecology Alliance, and Sarah Jarvis, a counselling psychology student.

This group gathered in nearby Totem Park, and there they explored the forest where each selected a found item, whether natural or man-made, that resonated with them. Some returned with twigs or leaves, others with trash items. 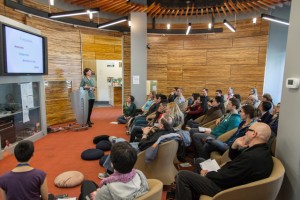 Magda Szpala, from Stanford University, closed with a talk on compassion.

Back in the circle, they engaged in object meditation, considering the connection between their object, themselves and the world. Placing the objects together in the center of the group they recited Thich Nhat Hanh’s poem “No Coming, No Going,” and with a renewed sense of connection to their environment, returned to the Global Lounge.

The other group met in the same room that had hosted the morning Zen session, this time with Remington Cooney, founder of Tao of Now meditation and yoga training.

After an introductory chakra meditation, the group settled in for a longer sit. Emphasizing the power of music to serve as a gateway to deeper meditative states, Cooney invited acoustic guitarist Samuel Romero to accompany the session with introspective melodies.

Midway through the sit, Cooney lifted a snail-shell-shaped didgeridoo, an instrument native to Australia, to his lips. A low, earthy vibration resonated through the room as his breath filled the instrument.

Participants emerged from the workshop humming with peaceful energy and describing the experience as “ethereal.” 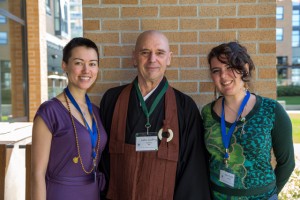 Organizers Chloë Lai, Eshin Godfrey, and Maria Trujillo, outside during the lunch break.

Closing keynote speaker Magda Szpala, a Compassion Cultivation Training (CCT) teacher, from Stanford University’s Center for Compassion and Altruism Research and Education, wrapped up the event with an outline of the CCT program and its relevance to urban life.

Citing a Princeton University study, Szpala explained that people who are feeling rushed aren’t able to connect compassionately with each other.

“When you connect with others, it doesn’t make the bad thing go away but it changes your relationship with it,” she said. Szpala said mindfulness practice is an effective means of slowing down, and accessing innate compassion toward one’s self and the community.

When Szpala concluded her presentation, Trujillo and I introduced the last exercise of the day.

We asked the attendees to engage in five minutes of silent reflection. Then, to help each person anchor their experiences for their own personal reference, each person received a card to write down their thoughts and observations.

As the conference drew to a close, small groups formed and voices rose in conversation, as the people made their way outside toward the afternoon sun.

0
SHARES
Share
Posted Under: 2015, Dharma In Canada, Summer
About the Author: Chloë Lai
Chloë Lai is the co-founder and charter president of the UBC Zen Sangha. She has been meditating in the Zen tradition for two years, under the guidance of E’cho Sirotnik, and is currently completing an undergraduate degree in English Literature at the University of British Columbia. When not meditating, she can be found zipping around Vancouver on a purple bicycle.