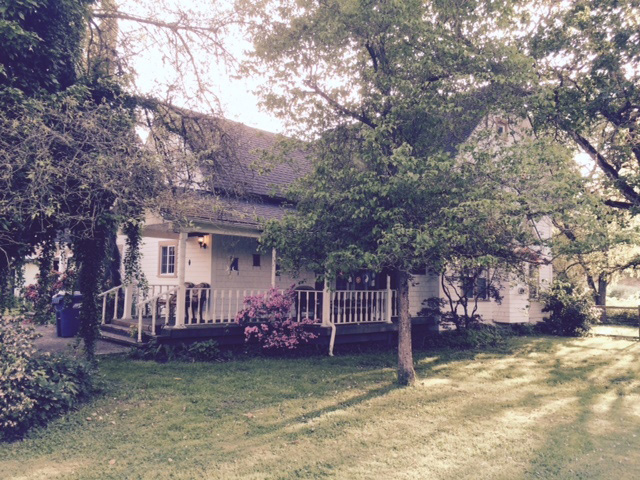 The Chenrezig Project is based out of a vintage farmhouse in Monroe, Washington.
Photos by: Mark Winwood.

The Chenrezig Project, a 10-year-old Tibetan Buddhist study and practice group, has expanded to Snohomish County, Washington, from Central Florida.

The group, under the direction of Buddhist practitioner and “sharer” Mark Winwood, takes its name from Chenrezig, the Tibetan Buddhist representation (and emanation) of transcendent compassion.

The Chenrezig Project currently meets on Tuesday evenings in a wonderfully fertile setting in the small town of Monroe, in an historical (1907) farmhouse nestled among huge trees and flowering plants in the scenic Woods Creek valley. Winwood, and his fiancée Kathy Adams, host the gatherings there. 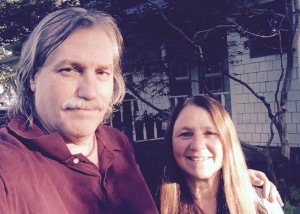 In addition to the weekly Monroe gatherings, the Chenrezig Project also hosts online dharma meetings across its Skype-supported “Dharma Bridge.” These every-other-Wednesday interactive meetings are joined primarily by practitioners in Florida and New York City, but are open to anyone with a Skype connection.

The Chenrezig Project is also planning a “Buddhism 101” day-long workshop in Monroe, on Saturday, June 27.

Winwood founded the Chenrezig Project as a vehicle for the people of Central Florida to learn the basic principles and practices of Tibetan Buddhism. There he quickly found himself introducing the dharma to a rather conservative-thinking region of the country, where the teachings were scarce.

Winwood remains what he calls the group’s resident “dharma sharer,” planning and offering teaching curriculums. With his journalism and publishing background, he also prepares teaching materials and handouts.

Winwood first encountered Tibetan Buddhist practice by “accidently” attending a teaching by Kalu Rinpoche in New York in the early 1980s, as he was working in the publishing industry and helping raise a family.

Maintaining dharma interest through the years, by attending teachings and through his own study, he “plunged” into formal committed study and practice following the crash of the San Francisco-based company Law.com, which he had co-founded in 2002. 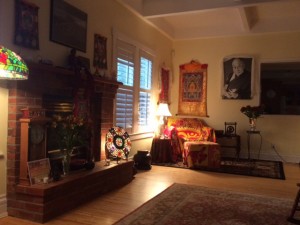 The Chenrezig Project’s gonpa, or shrine room, is in Winwood’s Monroe home.

He has accumulated more than a year of study in India, at Bodhgaya, Bir, Sarnath, and Dharamsala, and in Nepal’s Kopan Monastery. In addition he has studied at many U.S. events including His Holiness the Dalai Lama’s historic oral transmission of the Lam-rim Chen-mo, at Lehigh University in 2006.

The Chenrezig Project’s teachings and practices follow the Tibetan tradition, but are shared in line with the modern-day American experience.

While non-denominational, the group’s curriculum primarily studies and practices in the teachings of the Gelug tradition, which is the lineage kept by His Holiness the 14th Dalai Lama. Gelug Buddhism began in Tibet with the brilliant scholar and practitioner Je Tsongkhapa (1357-1419), who founded the great Ganden monastery and was tutor to the first Dalai Lama. 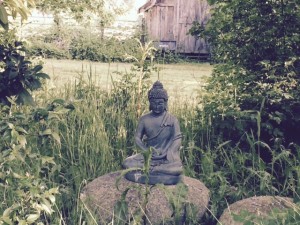 A welcoming Buddha, on the Monroe land.

Among the teachings the group presented were a full beginning-to-end reading and discussion of Tsongkhapa’s Lam-rim Chen-mo (the Steps to Great Enlightenment), as well as Shantideva’s Bodhicharyavatara and several of the Buddha’s Prajnaparamita teachings. The project also offered, and continues to offer, instruction in many methods of meditation.

Winwood has been invited to teach at various schools in Florida, becoming an adjunct professor of Buddhism at both Lake-Sumter State College (affiliated with the University of Central Florida), and the Hindu University of America, where he currently teaches Buddhist philosophy (in a distance-learning environment) to students pursuing advanced degrees in Vedic studies.

He also created and taught a state continuing-education-accredited course for hospice nurses and staff, based on the Tibetan Buddhist practices of dying, death and rebirth.

Many refer to the Project’s gatherings as exercises in “Dharma-practics,” as they are informative, friendly, supportive and everyday life-practical. All are invited regardless of Buddhist experience or knowledge, or lack thereof.

Please e-mail Winwood (mwinwood@chenrezigproject.org) for more information, or if you’d like to receive the Chenrezig Project’s weekly e-mag, consisting of original Buddhist-inclined writings, pithy quotes, features and news of interest.

0
SHARES
Share
Posted Under: 2015, Sangha News, Summer
About the Author: Mark Winwood
About the author: Mark Winwood is a former dot.com executive who teaches in the Tibetan Buddhist tradition, primarily in Florida and in his newly adopted home in Monroe, a town northeast of Seattle.