Members of more than 20 British Columbia Buddhist groups gathered in Vancouver, B.C. May 30, for the first annual BC Buddhist Festival.

People at the event celebrated the Buddhist Vesak holiday for world peace, raised money for local hospitals, and raised awareness of the plight in Nepal after the earthquakes.

Theravada, Mahayana and Vajrayana Buddhists, from a variety of cultures, shared their traditions with each other and with all who attended at the University of British Columbia’s Thunderbird Stadium.

The festival opened with an acknowledgement that it was being held on un-ceded Coast Salish land, as well as with a prayer of welcoming and peace from the Coast Salish people.

Monastics from the various traditions gathered on stage for pictures. Then, led by monastics from the Tsengok Monastery, the monks and nuns circled the Buddha bathing shrine that had been set up in the center of the stadium, sounding bells and horns.

In turn, each group bathed the Buddha according to their own Vesak tradition.

The holiday commemorates the birth, enlightenment and death of Gautama Buddha. Traditions surrounding the day vary widely, but a common thread is the ceremonial bathing of the Buddha.

Vesak derives its name from Vaisakha, the month in the Hindu calendar that corresponds to April/May in the modern Gregorian calendar. The exact date varies from tradition to tradition.

Korean Buddhists preparing for the festival of 108 bows.

The ceremony was powerful and beautiful. It was wonderful to witness and participate in the diversity of the celebration. It was moving to see the thread of the dharma and the teaching express itself.

Tibetan, Korean, Chinese, Vietnamese, Sri Lankan, Cambodian, Thai and Nepali monks and nuns all bathed the Buddha, and all sang and chanted. Each group paid homage so differently and yet the collective core truth came through; beautiful, diverse, but charged with a common meaning.

The sense of peace was palpable and continued through the day. People crowded round to take pictures. Children ran and played. Yet the focus and peace emanating from the monastics, as they performed their rituals, was undaunted and set a theme for the day.

Festival founder Tsengdok Rinpoche, of the Tsengdok Monastery, described the importance of Vesak in a recent article in Vancouver weekly The Georgia Strait.

“When we come together to bathe the Buddha…we have to do it with a very focused mind, and by bathing the Buddha, that means one starts to look inside and starts to purify oneself, and that actually creates a lot of peaceful energy in one’s body, in one’s physical existence,” Tsengdok Rinpoche said. “Can you imagine thousands of people coming together with that kind of energy? That creates so much peaceful energy, and that we can actually try to let the energy be spread out from ourselves to others.” 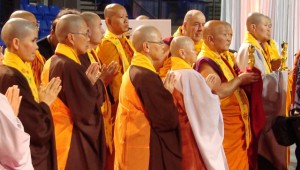 Monastics gather at the altar.

After this ceremony, the shrine was open to the public. Each of us in turn, and I think some more than once, bowed and stepped up to a statue, and bathed it three times in reverence.

Beside the shrine, at the opposite end of the arena from the main stage, was a wishing tree.

There people could write their wishes for themselves, their loved ones, and humanity on paper leaves, and volunteers then hung those wishes in the tree.

Beside the tree was an area where cards, stationery and art supplies were provided. Participants were encouraged to send cards, letters, or art, expressing love and compassion, to people of their choice. Volunteers were on hand to post these wishes free of charge anywhere in the world.

In fact volunteers were on hand everywhere, and in addition to the monastics, they were a true inspiration.

There was a free, informal, unrushed, friendly calm to the volunteers’ actions. They were always there to take a picture, to help you find your way, of just to smile and make you feel welcome. 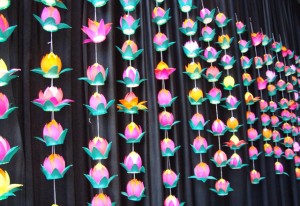 After ample time was allowed for people to participate in the Vesak ceremony, the festival broke for lunch. This gave participants time to sample the vegetarian foods being served by vendors.

Dishes from Tibet, China and Japan were offered, as well as some North American twists on vegetarian cuisine, and fresh fruit and pre-packaged organic snacks. Near the food vendors people were offering Buddhist arts and crafts from overseas, and from local artists.

After lunch, the afternoon program consisted of a variety of presentations. Ritual dances, chants and music, along with Buddhist-inspired secular dance and music from many Eastern traditions, filled the rest of the day. An impressive audio-visual set up was used to enhance these performances. Short documentaries on various topics, including the earthquake crisis in Nepal, were also shown.

Once the afternoon entertainment was done, thanks and presentations to sponsors and volunteers were offered. Checks were given to the various groups the festival was supporting.

Although admission was free, donations were accepted and a portion of all vendor sales was collected for charity. The first 45 percent of proceeds was divided between the B.C. Children’s Hospital Foundation and B.C. Palliative care. Another 45 percent was donated to the participating monastic groups. The remaining 10 percent was held in reserve to seed the next year’s festival. 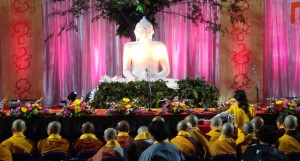 The festival closed with the distribution of paper lotus lanterns made by volunteers. The monastics then lead the crowd in a walking lotus lamp meditation around the arena, in solidarity for Nepal. I always find meditation of any kind of large group powerful, and this case was no different. There was a quiet profound feeling of solidarity and purpose, as we circled the arena in silence.

Speaking personally, I enjoyed the first annual BC Buddhist Festival and I hope it returns next year.

While attendance was somewhat light, for a first-year event it was impressive in its scope and presentation. It was wonderful to share in the richness of the diversity that is Buddhism.

Seeing simple truths expressed in so many beautiful ways was inspiring to me, as was the feeling of peace, inclusion and fun that permeated the festival.

0
SHARES
Share
Posted Under: 2015, Dharma In Canada, Summer
About the Author: Tom Kaczmarski
Tom Kaczmarski is a lay student of Rinzai Zen as brought to North America by the late Joshu Sazaki Roshi. He has been living at the Zen Centre of Vancouver for five years, studying Zen under his teacher, Eshin Godfrey.