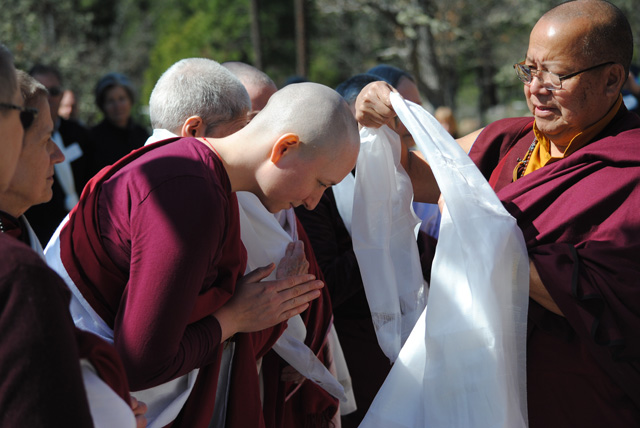 On April 4, Kagyu Changchub Chuling (KCC), a Buddhist center in Portland, Oregon, celebrated a momentous occasion with the sealing of its first three-year retreat.

The event took place at KCC’s retreat center, Ser Chö Ösel Ling (SCOL) — The Land of Clear Light Golden Dharma. Seated in the lava rocks and ponderosa pines of Goldendale, Washington, the retreat sealing is an event more than 15 years in the making.

Three-year retreat is traditional in Tibetan tradition, and is supported by only a few retreat centers in North America.

The first morning of the retreat was auspicious, with the sun shining bright in the desert air, and the often raucous wind of Goldendale calmed to a steady breeze. 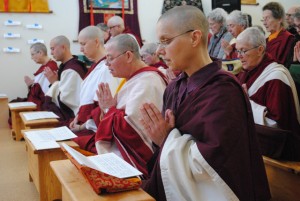 The ceremony was led by Lama Tsang Tsing of the center Kagyu Dakshang Chuling in Eugene, Oregon, a reminder of our interconnectedness, as he was also the retreat master for KCC’s Lama Michael Conklin on his own retreat, from 1986-1989.

Guests came from as near as Hood River and as far as from South America, to give farewell wishes to the 11 retreatants, whose ages span 31 to 78.

These men and women will spend the next three years and three months living as monks and nuns, echoing the aspiration of the great Tibetan master Kalu Rinpoche. In the 1970s Rinpoche shocked his own monks by saying that in the West, “Men and women will practice equally.”

Led by Lama Tsang Tsing, the retreatants, lamas and guests gathered in the shrine room of the south cloister to begin the appropriate rituals and practices. Sunlight streamed into the space, the blue sky visible through the room’s high windows. 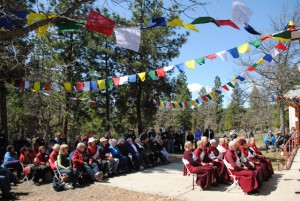 Visiting guests and retreatants during the gate-sealing ceremony.

Dressed in red and white ceremonial linens, the retreatants sat on maroon cushions, singing and chanting along with the lamas. They performed rituals including the Green Tara puja and the fire puja.

Addressing the full room, Lama Michael Conklin noted what he called the “sense of joy” filling the air, and the opportunity for retreatants to embark upon “what they feel so passionate about doing.” He also noted the exceptional amount of time, prayers, people-hours and donations that made possible the creation of SCOL, and the three-year retreat.

Through a translator, Lama Tsang Tsing observed the “great power and great benefit” in doing the practices together. He told the retreatants that “real benefit is realized from actual practice,” and encouraged them to give their “very best.”

A Vajrayana center founded in 1976 by the late Kalu Rinpoche, KCC instructs and supports the teachings of the Karma and Shangpa Kagyu lineages. It sits on a quiet neighborhood street in Portland, houses filled with families to its left and right, prayer flags flying from its front porch. 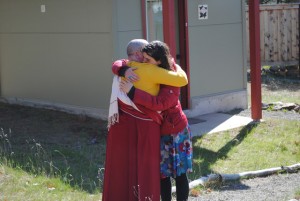 The center began its journey to create SCOL after several members visited India in 1999. On that trip, the late Bokar Rinpoche encouraged the group to delve into the dharma and make it their own, adding that hosting long retreat was essential to doing so.

In an article published in 2014, KCC Associate Teacher Julia King Tamang — who is now on the three-year retreat herself — emphasized the long-awaited opportunity for practitioners of the community to do long retreat. Their abilities, she wrote, could “inspire others” to maintain “a stable and fruitful practice.”

In 2001, KCC purchased 240 acres of land in the hills of Goldendale, an agricultural city in the rain shadow of the Cascade Mountain range. Over the next decade and a half, thanks to the tireless efforts of teachers, volunteers and donors, SCOL blossomed into what it is today — a center capable of supporting participants engaged in long retreat, as well as the teachers and staff who care for them.

SCOL held its first long retreat, one year in duration, from April 2013 to April 2014. The retreat masters were KCC’s resident lama since 1993 Lama Michael Conklin, and Lama Tara Goforth, of British Columbia.

These remarkable teachers are also the retreat masters for the three-year retreat. 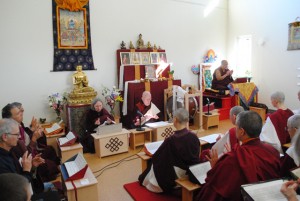 Lamas, retreatants, and guests engaged in three-year retreat ceremonies at SCOL retreat center. On the right is Lama Tsang Tsing of Eugene, Ore., and to his left, Lama Michael Conklin and Lama Tara Goforth.

One highlight of the newly-built staff quarters is a shared meditation hall, situated to the side of staff apartments.

Sangha carpenter and volunteer Jef Gunn put in many hours on the project, and said of the room’s placement, “You don’t pass it on the way to somewhere else; you go there to go there.”

A former SCOL operations manager  — also now on the three-year retreat — oversaw the majority of the building’s design. His impact, for instance, can be seen in the thoughtful addition of a small sink outside the meditation hall, provided to fill offering bowls.

The 11 retreatants will live in two cloisters, each housing eight separate cabins. 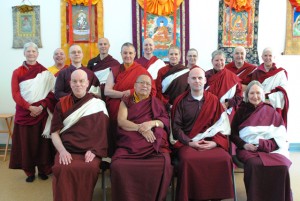 Both cloisters are surrounded by fences and a gate. The gate remains latched but unlocked, a reminder that the retreatants attend retreat by their own aspirations, and may leave at any time. Above the fence are views of Mt. Hood, oak trees, deer and breathtaking sunsets.

At the end of the April 4 ceremony came goodbyes.

Many offered traditional khata scarves, perhaps one of the most well-known Tibetan customs. Khatas represent the sincerity of offering, free of negative thoughts or motives, and have auspicious symbols and mantras woven into the fabric. Often they are white in color, to represent purity.

Guests then filed outside for a delicious vegetarian lunch provided by SCOL staff. Retreatants and lamas had lunch inside the cloister. The guests knew that the time for talking, touching and even making eye contact with the retreatants was finished for the next three years.

After lunch, the lamas and retreatants joined the guests outside, where Lama Tsang Tsing and the other lamas conducted the gate-sealing ceremony. Lama Tsang Tsing led the retreatants in a walk around the north and south cloisters, and upon return, offered a white khata to each of them.

The retreatants got up, forming rows, and filed into the cloister they had been assigned. The gates shut behind them — the ceremony was over, and the retreat sealed.

Visiting guests cleaned up and headed to their vehicles.

Quiet voices noted the auspiciousness of the occasion, the milestone achievement that had just occurred, the blessing of beautiful weather, and the great journey their friends had begun.

0
SHARES
Share
Posted Under: 2015, Sangha News, Summer
About the Author: Abby Cummings
About the author: Abby Cummings loves life. Blessed to have stumbled upon KCC in 2012, she volunteers both there and at SCOL. She lives in Portland, teaching woodworking and wooden boatbuilding.