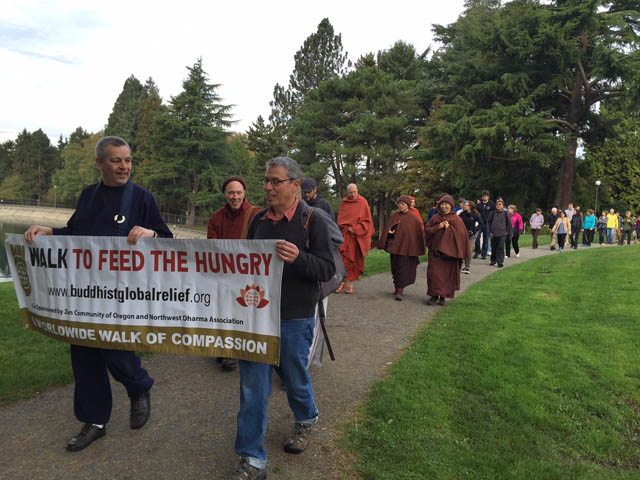 More than 50 people gathered on a beautiful October Saturday, for the 2015 Seattle Walk to Feed the Hungry.

We enjoyed the fellowship and exercise of the fund-raising walk, and shared a meal together. We also heard a short talk by well-known translator and monk Ven. Bhikkhu Bodhi, founder of Buddhist Global Relief. He talked about the history and work of the organization. 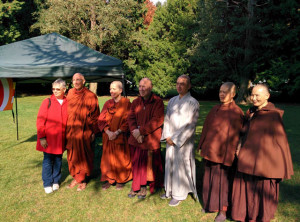 The trees in Seattle’s Volunteer Park were bright with fall colors, as they were along the streets of the Capitol Hill neighborhood where we walked. The streets were full of traffic and pedestrians, and we attracted quite a bit of attention and interest as we walked along carrying our colorful banners.

The Walk to Feed the Hungry is a fundraiser for Buddhist Global Relief. Ven. Bhikkhu Bodhi and some of his students founded the charity in 2008, to address chronic hunger and malnutrition through food aid, education, and agricultural improvements. 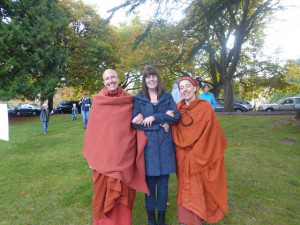 “When Jeff Carl of Seattle emailed us and offered to do some volunteer work in Seattle for BGR, I knew exactly what we needed,” said Carla Prater, assistant director of Buddhist Global Relief and a new resident of Seattle. “I asked him to head up the Walk to Feed the Hungry that first year and he carried on admirably, with the assistance of George Draffan and Ananda Cooley, until I moved to Seattle last year.

“They are a great team,” she said. “It means a lot to me to be able to help publicize the message of compassion in action through the walk.”

Participants included Seattle-based practitioners and teachers from the Thai Forest Tradition, as well as from Insight, Zen, and several Tibetan Buddhist lineages. 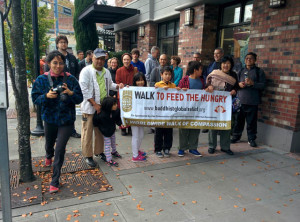 The walk went through Seattle streets, to give exposure to the effort.

Participating in the walk is a wonderful way to make connections with other Buddhists from many lineages, coming from all around the region.

“Seeing Bhikkhu Bodhi in person was very inspirational,” said one participant, Northwest Dharma Association board member Polly Trout. “He talked about how even though the money we collect is a small amount, the most important thing is raising awareness of hunger and creating the political will to end world hunger. We have the resources to do this, but they are being misdirected.”

Janice Clark, another long-time member of the Seattle Buddhist community, offered food for the monastics and participated in the walk.

“What a joy and inspiration it was to come together with Bhikkhu Bodhi and other like-minded monastics and lay people to walk with compassion for the benefit of those who are affected by hunger, poverty and social neglect,” Clark said. “We will use this joy to fuel the work that needs to be done.”