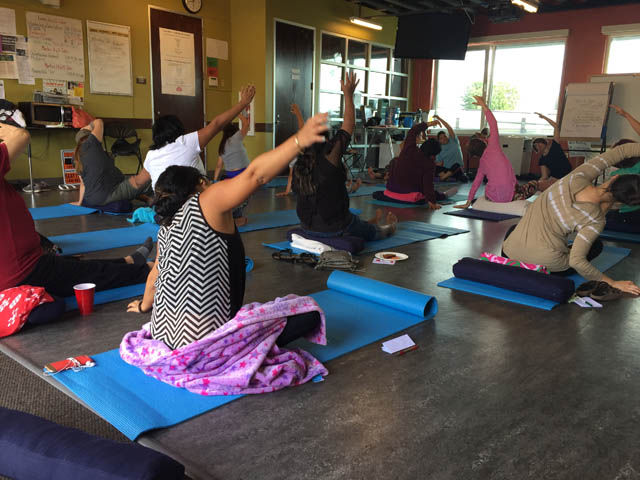 Latina women who suffer from poverty, anxiety and depression can find help in unexpected places, inside and outside themselves.

A pilot study by the University of Washington Health Services Department showed benefits from a combination of peer support and mindfulness training.

The study started in June with 20 women, all members of a support group that met weekly at Casa Latina, a Seattle-based nonprofit that partnered with the UW, said India Ornelas. She is an assistant professor in Health Services, and the study’s lead.

In two-hour sessions held once a week for five weeks, the women learned yoga, mindfulness, and meditation in classes led by a Spanish-speaking instructor, Ornelas said. 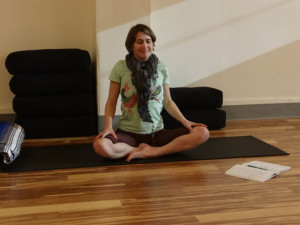 Serena Maurer, an independent consultant who designed the mindfulness program for Latina mothers.

“The women were very enthusiastic about how it had helped them and how much they were using it in their daily lives,” she said.

The study, which had only 15 participants at one point, may hint at something greater. This was merely a feasibility study, a pilot project. Ornelas plans to apply for a grant from the National Institute of Health for eight-week sessions at two different sites.

“We’re trying to help women learn coping strategies to deal with very stressful lives, and one of these strategies is to use mindfulness to be more present in stressful moments,” she said. 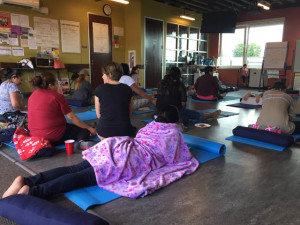 Time for socializing at an ALMA meeting.

Graduate Research Assistant Daron Ryan served as the study coordinator. She said that while the concept of “mindfulness” was foreign to the women in the beginning of the study, the practice of mindfulness clicked with the women, once they saw how it applied to their own lives.

Serena Maurer, an independent consultant with a doctorate in gender, women and sexuality studies, designed the program. She took some ideas from the mindfulness program associated with Stanford University, and some ideas from her work in various local programs. These include the Puget Sound Zen Center and Tiger Lily, a social justice-focused yoga studio in Seattle’s Rainier Valley.

On the first day, Maurer taught the women to focus on their breathing, while working in bits of yoga.  On the second day, she discussed barriers to mindfulness — patterns of the mind.

On the third day, the group investigated the idea of compassion, sharing their experiences through writing and drawing. On the fourth day, self-compassion was the topic. A review of all the topics followed on the fifth day, she said. 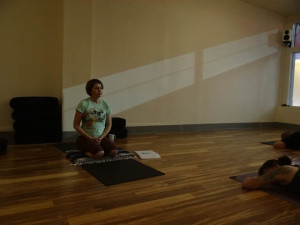 Maurer said the idea that people can make choices about their suffering was profound for the women. It taught them that they could take any situation and choose to cultivate positive feelings and a sense of well-being, rather than its opposite. It gave the women a sense of empowerment, as did the group bonding and support, she said.

A post-study survey highlighted the benefits of the program. When asked about what she had learned, one of the women said, “The most important thing is to value ourselves; if we don’t take care of ourselves, we can’t take care of anyone else.”

Another woman said she had learned to “love myself more, meditate more, know myself more deeply, (and) learn to relax.”

“The relaxation, the yoga, helped me connect with myself and above all learn to control my feelings,” another woman said.

When asked how the program affected their parenting, the women also made positive comments.

“It helped me get closer to my children and have more communication with them,” one woman said.

Another woman said that before the class, she would sometimes yell at her kids. Now, she listens to them. “My kids notice the difference in my emotions,” she said.

About the whole program, one woman said, “It was a magnificent thing.  I would like to continue practicing. I didn’t like it, I loved it!”

0
SHARES
Share
Posted Under: 2015, Dharma Education, Winter
About the Author: Bob Baumgartner
After working in small newspapers near Seattle, Bob Baumgartner moved to Taiwan, where he taught English, studied Chinese, and was the first foreigner to earn an MBA at Cheng Kung University, Tainan, Taiwan. He is now the service manager for Helix, maker of the world's first lateral trainer. On the weekends, you might find him at the Seattle Meditation Center.