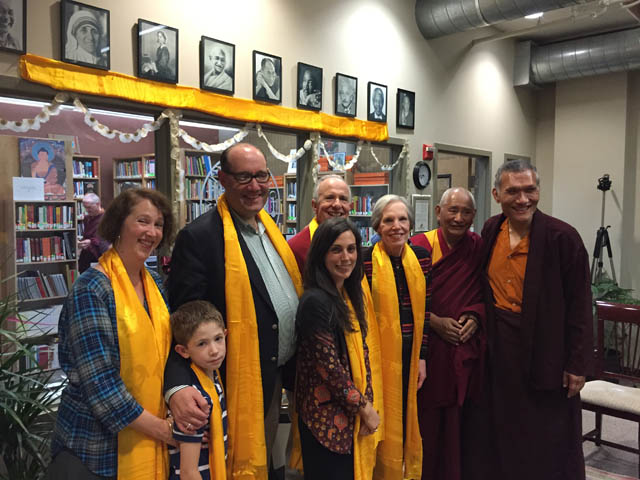 Maitripa College in October celebrated the renaming of its library for the much-loved professor Jim Blumenthal, a year after his passing at an early age.

The event, which included a puja ceremony, also recognized the significant addition of Blumenthal’s 1,300-volume collection of books and journals to the James A. Blumenthal Library. 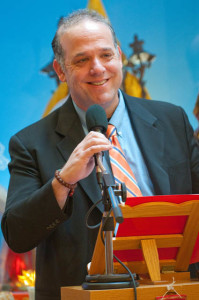 Professor Jim Blumenthal, much-loved at the college, left his collection of Buddhist books to the college after he died.

This gift has significantly expanded the Portland college’s collection in areas dear to Blumenthal, such as social justice, peace, ecology, Tibetan Buddhist philosophy, and Tibetan language and history.

The dedication ceremony was led by college President Yangsi Rinpoche, and attended by over 80 guests. These included Geshe Tenzin Dorje from Deer Park Buddhist Center in Wisconsin, Blumenthal’s parents and brother, his wife Tiffany, his son Ben and Ben’s mother Sara, and family friends.

Also attending were people from Maitripa College’s community, as well many of the volunteers who worked tirelessly to catalog Blumenthal’s collection.

During the ceremony, Blumenthal’s brother Tom thanked the Maitripa community for its support of Blumenthal and his family. Yangsi Rinpoche said the expanded library will ensure that Blumenthal’s influence continued into the future, by enhancing the development of scholars and practitioners. 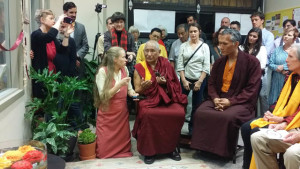 Geshe Tenzin Dorje (translated by former Maitripa student Katrina Brooks) talked about Blumenthal’s karmic connection to Buddhism, his kindness, his meaningful life, and how these would contribute to a fortunate rebirth.

The ceremony also was graced with music.  Blumenthal’s good friend Jerry Joseph, a noted songwriter, performed a song he had written for Blumenthal called “Craters of the Moon.”

After prayers led by Yangsi Rinpoche, Blumenthal’s parents Jack and Susan Blumenthal cut the ribbon to officially open the James A. Blumenthal Library. The dedication ceremony was follow by a Vajrasattva tsog, a Tibetan Buddhist offering ceremony, in the Jokhang Meditation Hall with Tibetan cymbals, drum, conch shell, and harmonium accompaniment. 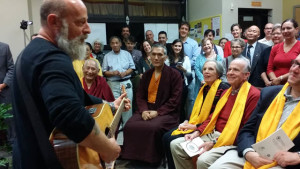 Jerry Joseph performs “Craters of the Moon,” enjoyed by Geshe Tenzin Dorje, Yangsi Rinpoche, Susan and Jack Blumenthal, and a crowd from the Maitripa College community.

Maitripa College has also created a Friends of the James A. Blumenthal Library fund to encourage further development, according to a strategic plan for the library. This plan includes print and digital acquisitions, technology upgrades, training sessions in academic methods, and professional staffing.

The mission of the library is to become one of the world’s best collections supporting research in Buddhist studies and related and applied fields, and to support the future accreditation of Maitripa College. Maitripa College offers an annual community membership program to extend library privileges to anyone who would like to utilize these resources.