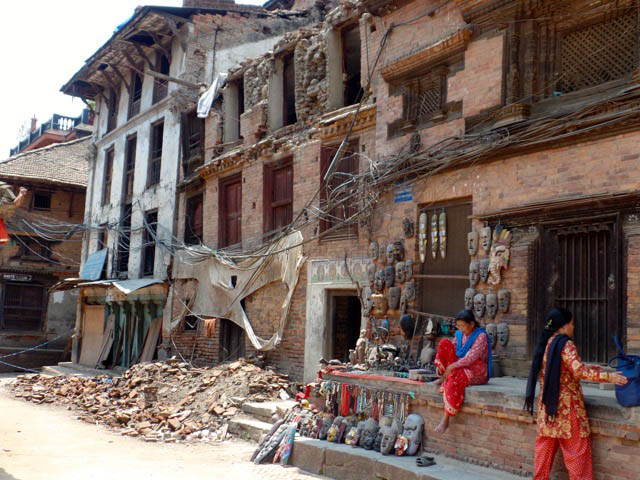 A woman has re-opened her shop outside in Bhaktapur, in the Kathmandu Valley, even though the building behind her looks like it’s going to sink.
Photos by Bill Hanson

Right after the massive earthquake struck Nepal in May of 2015, killing more than 9,000, Bill Hanson of Portland returned there to help.

His immediate response was, “I have to go back right now,” he said.

With a respectful and emotional connection to Nepal, Hanson felt like he needed to return to at least bear witness. Knowing the language and culture, he felt that he might be of some assistance. 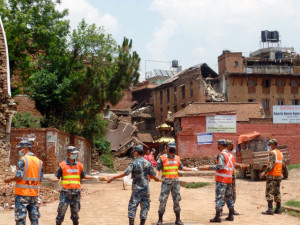 Among the heroes were army and police people, here handing bricks hand-to-hand to salvage what they can.

The decision was a big one, because he had arrived in Portland just three days before after three weeks in Nepal, and because he had recently moved to the Portland area with his husband Noi Lonalu.

But Hanson has deep roots in Nepal after serving in the Peace Corps there during the late ‘60s, and he turned to these roots in his decision to go back.

Right after the earthquake, Hanson was able to contact Nepali friends and villagers via phone, Skype and Facebook, to get first-hand report on the devastation.  The earthquake had damaged ancient cities surrounding Kathmandu, and the historical parts of Kathmandu itself.

When Hanson got to the village of Bandipur, where he had served in the Peace Corps, he saw that the main bazaar, which is an ancient trading post, was not damaged.

What was damaged however, was the entrance to the bazaar where the Dalit people, formerly known as the untouchables, lived. Their clustered homes were all destroyed. They were living under pieces of tin, bamboo and leaves and whatever else they could find. 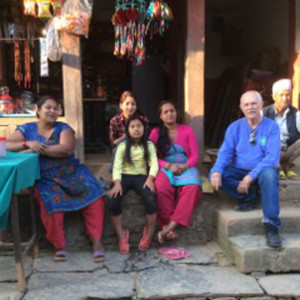 Bill Hason visiting with people from the village where he first served in the Peace Corps.

He quickly allied with Chij Shrestha, who was from Bandipur and was his oldest friend from Hanson’s Peace Corps time. Shrestha recently retired as head of World Education Group in Nepal.

They wanted to build at least 22 dwellings for people who had been displaced, before the monsoon arrived with its drenching mountain rains. They worked with a young Nepali architecture group to make a simple design in a familiar style.

Together the two men, supported by the generosity of many, have surpassed their original goals and have built 65 dwellings to house those who lost everything.

To support the work Shrestha developed a modest relief fund, which channeled all of the donated monies through World Education’s U.S. division.

Hanson and Shrestha could work quickly due to their own organizing talents, and the resilient spirit of the Nepali people. 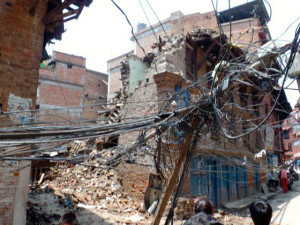 This house in Bhaktapur, one of the region’s most culturally rich areas, collapsed and took the electric lines with it.

That spirit was one of the first things Hanson saw, when he arrived in Kathmandu 72 hours after the earthquake hit.

In a response he calls “Nepali dharma,” regular people already were working together with the army and police, rebuilding one brick at a time, to help each other. Wherever possible the Nepali people themselves went directly to work, without waiting for outside help.

Hanson was deeply impressed by the spirit of the Nepali people, by their move to action, and by their natural resilience. Everyone was involved in rebuilding. It did not mean that help and expertise was not needed, but that the people already had joined together to begin the slow process of recovery.

Hanson’s road to helping in Nepal this year was a long one. He was recruited to the Peace Corps in 1965, right out of the class room at the University of Vermont, where he was teaching French and Spanish.

He was one of the earlier Peace Corps Volunteers from 1965-1967 in Bandipur, a village between Kathmandu and Pokhara. Hanson went on to train new volunteers in Nepali, and later became the Peace Corps language coordinator. 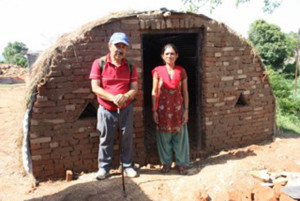 Chij Shrestha with a woman who will live in the new house built for her after the earthquake.

During his time in Peace Corps Nepal, Hanson heard from his trainees about Buddhist meditation teacher S.N. Goenka, who at that time was teaching retreats in India. Hanson took his first Goenka retreat in Dalhousie, India, and was at Goenka’s first course at Dhamma Giri center in Igatpuri, India.

Later on he served as translator for many of Goenka’s one-on-one sessions with students from around the world.

After the Peace Corps Bill taught for Coverdale Organization UK, a British management training company. Company founder Ralph Coverdale had developed organization-building methods that taught teamwork and listening skills. The organization’s philosophy honored each individual’s contribution and brought together the richness of all workers.

Hanson became a consultant there, feeling Cloverdale’s work manifested a compassionate approach that held to the principles of his own Buddhist background. Hanson felt that he was engaged in right livelihood, as Goenka had encouraged. 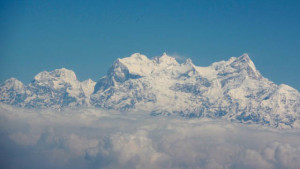 The Himalayas, still majestic after the earthquakes.

Through this company Hanson worked in many African countries, and trained people at the African Development Bank, in the Ivory Coast.

Hanson then went on to work for the United Nations, organizing UNICEF staff trainings for the UN Secretariat in New York, where he worked on environmental programs in Brazil, Syria and Kenya. He also worked for the World Health Organization in the food and agriculture division.

Now Hanson and his husband, also a Vipassana meditator, are looking forward to their three children joining them from Thailand to attend Portland public schools.

Hanson, who is fluent in French, Spanish, Nepali and Thai, and conversant in a number of other languages, continues working as a linguist, international trainer and teacher.

Nepal is the birthplace of Shakyamuni Buddha, and Buddhism is alive and well in Nepal. Hanson believes Buddhist teachings helped Nepali people respond to their impermanence and suffering, and helped them pick up the pieces after the earthquake.

At the conclusion of our conversation, at Hanson’s new home in Portland, I asked him how we can now help Nepal.

His response was clear. “The best way to help now,” he said, “Is to visit Nepal!”

0
SHARES
Share
Posted Under: 2015, Compassionate Action, Winter
About the Author: Jacqueline Mandell
Jacqueline Mandell is a founding teacher of Samden Ling of Portland, with a long history in Tibetan Buddhism. She also is a former board member of Northwest Dharma Association. She first met Bill Hanson in 1972 at a vipassana retreat. Recently she contacted him to learn more about his experiences in returning to Nepal directly after the earthquake.