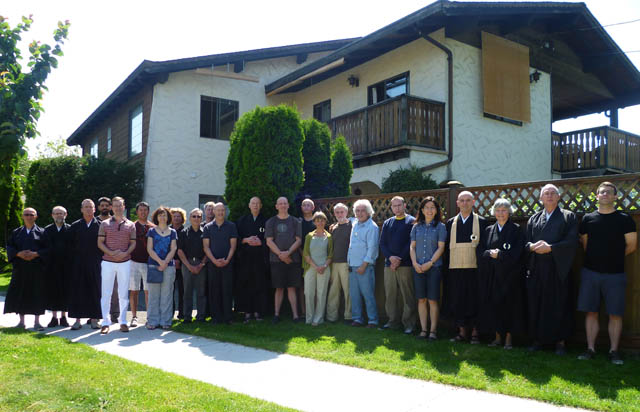 Our work to complete our center has also brought us together in community.
Photos: Zen Centre of Vancouver

For its 50th anniversary, Zen Centre of Vancouver has launched a campaign to pay off the last remaining portion of its mortgage, about $81,000, by mid-2016.

“Once we no longer depend on rental income,” said the centre’s abbot and teacher, Eshin John Godfrey, “we can support live-in accommodations for practitioners, particularly younger ones, so they can benefit from a more intensive immersion into Zen practice.” 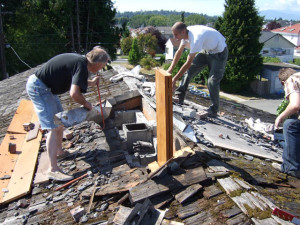 Renovations began immediately with plenty of volunteer help from sang members. Here we are removing the chimney portion of the fireplace.

Paying off the mortgage will support the centre‘s core of dedicated practitioners, he said, and will “Sustain our role as a major Buddhist institution contibuting to the well-being of the city and province.”

Two Zen students already live in the house, while Godfrey and his wife Myorei live in a small apartment. Myorei also rents two other rooms for her work as a Reiki teacher.

Sangha member Tom Kaczmarski (one of this article’s co-authors) rented a room at the centre for several years. 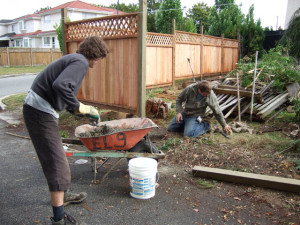 Gardening is a traditional form of practice in Japanese Zen. We needed to do plenty of practice!

“My practice benefitted enormously from living there,” Kaczmarski said. “Fortunately I could afford to pay the rent. But not everyone can, especially the younger generation.”

By the fall of 2015, people from within and outside the sangha had already donated or pledged over half of the remaining mortgage.

“We’re optimistic that the rest will come in by early in the new year,” Godfrey said, “and we’ll be free to offer our activities to dedicated practitioners for years to come.”

A Zen centre link offers  updates on the mortgage campaign. 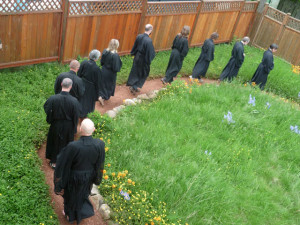 As we do in kinhin walking practice, we move forward one step at a time, in harmony with each other and with each step.

At the onset of the campaign, the centre benefitted from expert pro bono advice from Wendy Bradley, a fundraising consultant. She  suggested the centre first hone its stated mission, review its structure and operations accordingly, and then approach potential benefactors including like-minded groups and individuals, businesses the centre patronizes, and the sangha itself.

The new mission statement, crafted by a committee and approved at a general meeting, emphasizes an engaged and interactive teacher-led sangha that helps people awaken to their true nature, enabling them to lead healthier lives and contribute positively to this troubled world.

The Zen Centre  came together in the mid-1960s, when a Los Angeles-based Rinzai Zen master, the late Joshu Sasaki, was first invited to lead a retreat in Vancouver.

Roshi had introduced the tathagata teaching of Zen, which emphasizes the core principle of form and emptiness as encapsulated in the Heart Sutra’s formula, “form is emptiness, emptiness exactly form.” 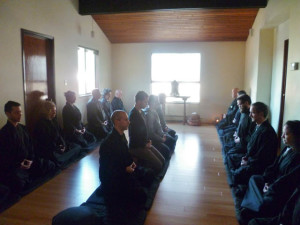 The result has been gratifying. We have a beautiful place to practice. Here we are in sesshin, a week-long silent, residential retreat.

“Emptiness is often mistaken to mean nothingness,” said Godfrey. “What it really signifies is empty of the self-centered fixated self, and full of the ‘big-hearted’ self that’s intrinsically interrelated with all life: hence, manifesting a compassionate life.”

“To study Zen,” Godfrey said, ”is to soften and melt the apparent separation of inside and outside. Our heart is boundlessly opened as we experience everything as ourselves and, conversely,  ourselves as everything .”

Sasaki first taught in a loft in the historic Gastown district of Vancouver, and later in members’ homes and in a Buddhist temple. Later the centre moved to rented houses in the Westside.

In 1985 Godfrey, one of Roshi’s senior students, came to lead the centre as its abbot and teacher. By then, the group had purchased a house in the impoverished Downtown Eastside. 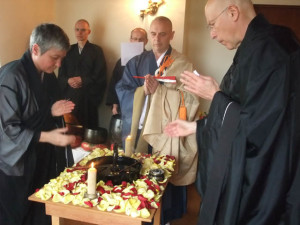 We have the space now for a variety of ceremonies and forms of practice. Here we are celebrating Buddha’s birthday.

“It was a fairly rundown place in a pretty rough neighborhood,” Godfrey said. “It was all we could afford – and it put us right in the midst of this troubled world.”

In the early 1990s the centre purchased its second house, on the eastside of Vancouver, close to the Nanaimo Skytrain station.

“Over the years we fixed it up to function better as a practice centre,” Godfrey said. By then he and core sangha members had introduced a full program of daily sits, monthly one-day retreats, and quarterly weeklong residential retreats. For many years the group scheduled those retreats at a B&B on one of the Gulf Islands, southwest of Vancouver.

By 2006 the centre had outgrown its second house and purchased a larger one on Sherbrooke Street, between Fraser and Knight streets. The house had been custom built in the 1970s by a Slovenian  immigrant, to resemble an Alpine chalet. 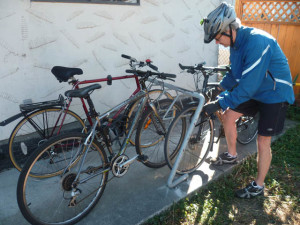 The environment was always a concern for us. We added extra insulation and installed a high efficiency furnace, but sometimes a simple thing like a bike rack can make a difference.

“Some of us thought it looked like a Buddhist temple – solid, ornate and grounded,” Godfrey said. The main front and back doors feature large carved dogwood flowers that could be mistaken for lotus blossoms.

The bottom floor had never been completed, and the whole house required considerable renovation to turn it into a well-functioning practice centre. Much of the work was done by sangha volunteers.

Now complete, the house is large enough to accommodate all the centre’s activities, including weeklong retreats, with up to 16 people staying full time.

“With our mission clearly in mind and our home secure,” said Godfrey, “the Zen Centre of Vancouver will continue in its next half century to bring the dharma to generations of British Columbians.”

0
SHARES
Share
Posted Under: 2015, Dharma In Canada, Winter
About the Author: Tom Kaczmarski and Gareth Sirotnik
Tom Kaczmarski has practiced at the Zen Centre of Vancouver since 2009, and works as a grip in B.C.’s thriving film industry.

Gareth Sirotnik, formerly ordained, has practiced at the centre since 1999 and also leads Zen meditation groups at the University of British Columbia.