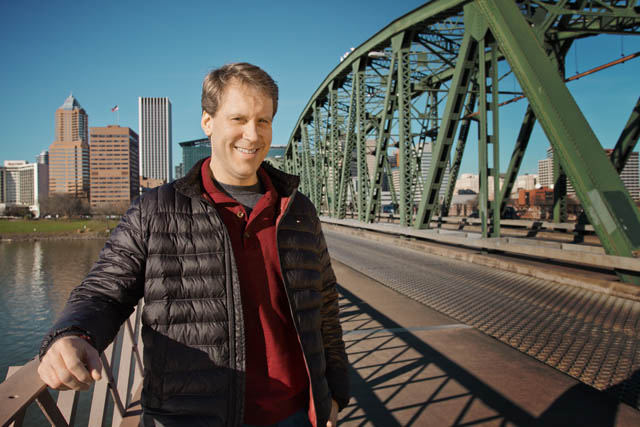 (Editor’s note: A year after the September, 2014 death of Portland Zen teacher Kyogen Carlson, evangelical Christian Paul Louis Metzger has published a memoir, “Evangelical Zen: A Christian’s Spiritual Travels with a Buddhist Friend,” about his own spiritual journey and his collaboration with Carlson.

Metzger is professor of theology and culture at Multnomah University in Portland. Carlson was abbot of Dharma Rain Zen Center before dying of a heart attack at 65. The two explored the parallels and differences between their traditions, work that continues. 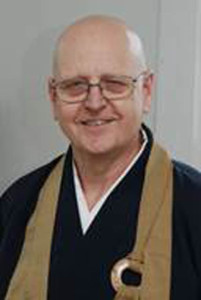 Here is a You Tube video, of the two of them discussing their work.

The following are Metzger’s thoughts about his association with Carlson, his own spiritual journey, and the book.)

All too often we sweep the perspectives of those with whom we disagree out the door or under the carpet. We even sweep them out of our minds.

Those who are Buddhists and Christians, for example, should not be so rash to dismiss the “other.” After all, our Buddhist and Christian traditions respectively maintain that all people and things have “innate, universal Buddha Nature,” as the late Zen Abbot Kyogen Carlson maintained, or that all people are created in God’s image, as I believe.

For all our ideological differences, Kyogen and I were exceptionally good friends. Many of you may know that he passed away suddenly in September 2014. He had just finished writing his reflections, from which I quoted above, and which appear in our recently released volume, “Evangelical Zen: A Christian’s Spiritual Travels with a Buddhist Friend” (Patheos, 2015).

Kyogen and I did not sweep our differences as a Zen Buddhist priest and as an Evangelical theologian under the carpet or out the door. We searched our differences for something significant, which not only served to distinguish us, but which led us to find unsuspected similarities, including a shared emphasis on compassion and creative curiosity, and a commitment to search for common ground. 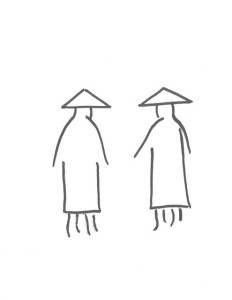 A drawing, by Paul Metzger, representing the friendship between himself and Kyogen Carlson.

Our friendship was more than friendship. It was a form of global humanity that resides in particular locales and relationships, for the universe is in a grain of sand. The “universal and particular…interpenetrate,” as Kyogen wrote in our book. Whether we refer to it as innate, universal Buddha nature or the image of God, it is all around us and within us, even in the midst of our differences and divisions.

“Evangelical Zen” is part St. Augustine’s “Confessions,” and part Robert Pirsig’s “Zen and the Art of Motorcycle Maintenance.” The book reflects my spiritual journey—an inner pilgrimage of sorts that weaves through an actual physical 40-day journey, with my Japanese wife and children in Japan.

The experiences of that journey, the beauties of Japan, its culture, and its religion, became for me a lens on a deeper quest. In the book I go searching for, and believe am finding, a global humanity in conversation with my literary traveling companion, Kyogen, who provided the foreword and responses to my essays.

Sometimes we have to travel far and abroad to come back home. My experiences in Japan over the years have made me more self-aware as an American, hopefully helping me move beyond a dangerous nationalistic insularity while also coming to appreciate what makes America as well as Japan special. 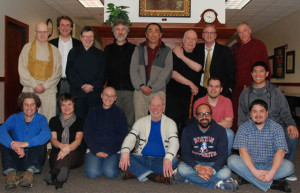 While Kyogen learned a great deal from Japanese Buddhism, he was resolute on making sure that Soto Zen Buddhism did not remain simply Japanese, but became truly American as well. This is a point that comes out in the book at a few key places, as does my concern that Christianity in Japan bear witness to Jesus Christ in his infinite compassion in a distinctively Japanese manner, not overshadowed by the globalizing reach of exported American or Western culture.

Given that each of us maintains in some form that the universe is in a grain of sand, we think it is critically important that we take each moment seriously, as well as our present placement.

Thus, while I deeply miss Japan, as does my wife, we dare not allow the grass on the other side of the fence across the ocean to keep us from tending to our own garden here.

The greater Portland area is where we call home now. The Pacific Northwestern culture with its adventurous, entrepreneurial and pioneer spirit, coupled with its emphasis on tolerance and cultural pluralism, are wonderful features in so many ways.

Still, its emphasis on tolerance, if not balanced with concern for other-oriented love, can lead to indifference toward those not of one’s particular affinity group. We must remain diligent and mindful of the universe within each and every grain of sand, including among Buddhists and evangelicals. 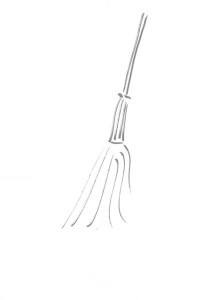 A drawing of a broom, also by Metzger, representing the idea of not sweeping things under the rug

Kyogen is no longer with us, which still weighs heavily on my Christian soul. To quote one of my Buddhist friends in our ongoing monthly dialogues involving Buddhists and evangelicals, “I am pissed at impermanence.”

I cherish the memories of Kyogen’s and my deep conversations, and yet I must live anew, being reborn each and every moment to experience life to the full. If I live in the past, I fail to take seriously the sweeping activity that accompanies proper meditation in our respective traditions, so that we don’t grasp and clutch and live in non-authentic ways.

Perhaps you face the same struggle? When we cling to the past we fail to see what is before us, and might even sweep that which is important in the moment away.

There is a great amount of sweeping left for us to do together as Buddhists and Christians, in the Pacific Northwest and beyond. The dialogue project that Kyogen and I hosted for years continues on, but not without some measure of pain and suffering.

I wish Kyogen were here to help navigate the storms when they arise. It is important that we remember what he taught us, even as the rest of us bring the best of our respective traditions to bear on our conversations over potluck meals. 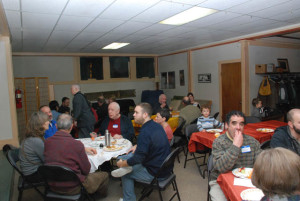 A 2013 potluck dinner at Dharma Rain. All (except for the children) were dialog participants, about half Buddhists and half Evangelical Christians.

When you bring people together who embody different religious and cultural traditions, it is easy for individuals to feel swept away by painful moments in the encounters. Past negative experiences, which we associate consciously or unconsciously with what diverse others say about religion, culture, ethics and politics, can arise quickly and sting the heart or eye like sand in a storm, no matter the intent.

We must remain mindful, see the trigger mechanism clearly, perceive the reaction clearly, and understand them for what they are, as a Buddhist friend observed. We must try to respond in ways that we do not sweep the other away, which would devastate the entire world or human ecosystem we inhabit whether in Nagano, Japan, or Portland, Oregon, whether we are conscious of it or not. After all, the universe is in each grain of sand.

On Jan. 26, Metzger is to read from “Evangelical Zen: A Christian’s Spiritual Travels with a Buddhist Friend,” with Sallie Jiko Tisdale, a noted author and leader at Kyogen’s temple community, Dharma Rain Zen Center in Portland.

0
SHARES
Share
Posted Under: 2015, Dharma Healing, Arts, Winter
About the Author: Paul Louis Metzger, Ph.D.
Paul Louis Metzger, Ph.D., is professor of theology and culture, at Multnomah University in Portland. He received a bachelor’s degree from Northwestern College in Minnesota, and a doctorate from King’s College London, University of London. He has published many books, including “Connecting Christ: How to Discuss Jesus in a World of Diverse Paths.” He is a member of the Center of Theological Inquiry in Princeton, N.J.