Residents of McNeil Island, and friends and supporters, at the dedication ceremony.

The sangha at McNeil Island’s Special Commitment Center in mid-September celebrated their new outdoor pagoda, a building intended to support their Buddhist practice while they’re incarcerated.

Sept. 16 was bright and beautiful, perfect for the long-awaited special ceremony, and official dedication, that would open the new outdoor practice space for the Buddhist residents of the Special Commitment Center. The gathering included the SCC Buddhist Group, SCC staff, special invited guests, and about 20 non-Buddhist SCC residents who had helped make the celebration possible.

SCC residents have spent the last few years raising the funds to build this gazebo, which they modeled to look like a Buddhist pagoda. The SCC sangha was fully supported by the facility superintendent and chaplain, as well as by many other SCC staff and residents who wanted to support their Buddhist brothers. 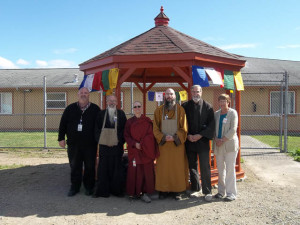 The concept of the pagoda was originally conceived in 2009, by people who were serving time at the Monroe Corrections Center. However complications and delays kept the project from taking root, and the idea moved along with the inmates to the Special Commitment Center.

Both units are part of the Washington State Department of Corrections. Monroe Corrections Center is outside the town of Monroe, about 33 miles northeast of Seattle, while McNeil Island is in southern Puget Sound, about 40 miles south of Seattle.

Having such a space gives these groups a sense of identity, community and belonging, which otherwise vanishes whenever the group is not in community practice.

On the day of the opening ceremony the structure was substantially completed, missing only some benches, decorative trim and landscaping.  The dedication day also was chosen to become the once-yearly religious holiday that SCC Buddhists are allowed to celebrate, as are other religious groups.

Each leader gave offerings and contributed to the dedication, with ceremonies of their particular tradition. 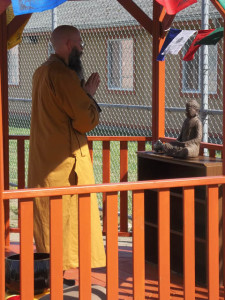 The dedication was followed by a banquet, and the visiting teachers and members of the SCC community then offered dharma talks.

Several people said at the event that this project has done more to bring together SCC residents and staff than any other activity of the last 10 years.

SCC residents of all faith traditions, and staff, collaborated on the fundraising, construction and dedication of the Buddhist Pagoda in a way never before experienced at the institution.  The Buddhist group has offered the space to anyone wishing to practice mediation or other contemplative practices, whenever the space is available.

Getting the structure completed was a long journey, requiring a lot of patience, persistence, and harmony.

In 2013 members of the SCC Buddhist Group, who were meeting regularly in a storage room adjacent to the chapel office, re-floated the idea of a gazebo-type building as an outside practice space. That April they submitted an official proposal to the SCC administration, to build an outside structure for the purpose of religious practice, contingent on their ability to raise the necessary funds themselves. 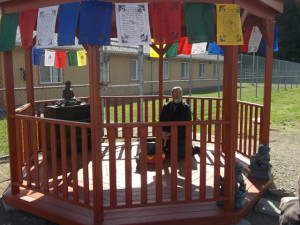 The campaign already had raised $970, when a SCC Buddhist group member finished the campaign with an offer of $5,000, because he wanted to ensure the success of the project.

With the funding secured, members approached the administration about beginning construction, and were instructed to find a licensed builder/contractor to do the work. So once again the inmates sent out dozens of letters, this time to individuals and area contractors, but no one stepped forward to take on the project.

Not discouraged, the group drafted an official plan to build the structure in-house, which included purchasing a gazebo kit and approaching fellow SCC inmates who had construction experience. They received permission to go forward with this plan in May, 2015.

The construction kit arrived in early August, but controversy arose about the exact location of the proposed structure, so it took another four weeks to establish exactly where it would be erected. Once everything was settled, invitations went out and the assembly of the gazebo/pagoda took off.

The date selected for the dedication became the driving force accelerating the assembly process, and all the wood was stained and the structure was assembled in the two weeks prior to the dedication.

Such are the rewards and offerings of this “special commitment,” from the Buddhist sangha of the Special Commitment Center of McNeil Island.