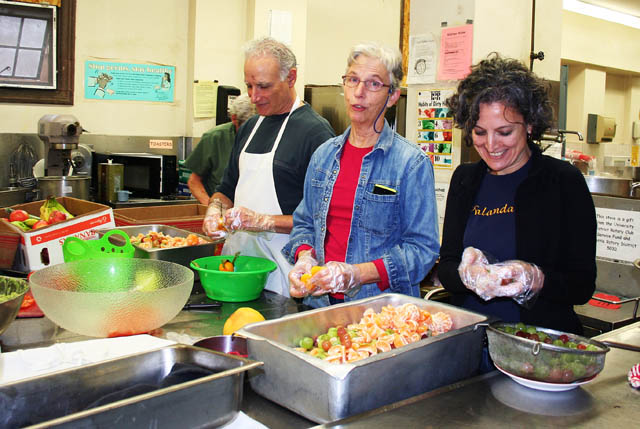 Members of Seattle’s Nalandabodhi Buddhist sangha recently turned out not to meditate but to cook, for 150 homeless youth and adults in Seattle’s University District.

The meals-for-homeless project was inspired in part by the 17th Karmapa, Ogyen Trinley Dorje, who visited Seattle in May. Bringing compassion into action was the focus of his Seattle Center public talks, which included a panel of young adults devoted to projects such as youth homelessness.

“It’s a real inspirational time for us to really put our meditation into action and walk our talk,” said Nick Vail, a co-director of the Seattle Nalandabodhi sangha, during a related panel  discussion at Nalanda West. 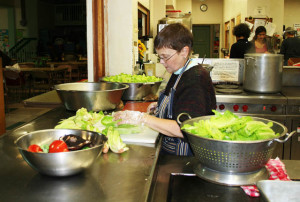 Organized chaos prevails every Friday afternoon in the sprawling basement of Seattle’s University Temple United Methodist Church, where the meals are cooked and served.

Street people from the University District fill the high-ceilinged space, a much-appreciated refuge from the cold, drizzly winter weather. Volunteers hand out sandwiches and hot coffee; men and women await their turns for a hot shower and laundry services (provided twice-weekly by the nonprofit Urban Rest Stop); drug addicts drawn by the church’s needle-exchange program stick around to socialize or to shop at the weekly thrift store that temporarily occupies half the room.

“It’s one of the most heart-warming places of the city,” Simpson said.

In the basement kitchen, more volunteers are busy preparing the Friday Feast — a free, restaurant-quality meal attended by about 150 people of all ages each week. 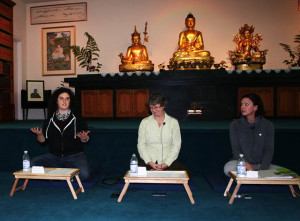 When the weekly feast ends at 7 p.m., most of the dining tables are cleared away as the basement space transitions back into the ROOTS Young Adult Shelter. ROOTS (Rising Out of the Shadows) provides overnight shelter, dinner, hot breakfasts and showers for homeless people ages 18 to 25. Bunks and floor mattresses provide sleeping spots for 45 young people each night.

Members of Seattle’s Nalandabodhi sangha have turned out to help with multiple Friday Feasts, as part of the Tibetan Buddhist organization’s focus on homelessness. Each year the global Nalandabodhi sangha celebrates Lhabab Duchen, one of four annual festival days commemorating special times in the life of the Buddha, by engaging in a mindful activity that emphasizes community engagement.

A Nov. 1 panel at  NalandaWest, an event center run by Nalandabodhi, included Kristine Cunningham, executive director of ROOTS; Meredith Arena, a former case manager for Seattle’s YouthCare shelter for ages 13 to 23; and Nalandabodhi member Darcey Quinn, whose 44-year-old brother is homeless, living on the streets of Oakland, California.

Quinn said she occasionally searches him out, just to give him a loving hug and her telephone number. She understands he doesn’t want her help, so she always sets an intention before she sees him, to remind herself that she’s not there to “save” him. 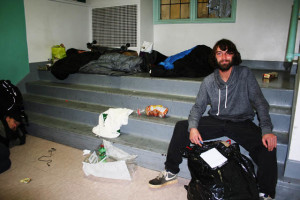 Travis Gowan, 26, used to sleep at the ROOTS shelter, but he recently “aged out” and now sleeps on the streets. Here he awaits a recent Friday Feast.

“I’m really grateful that we are getting involved with homelessness, because it is helping me understand my brother a little bit better. It’s helping me understand me a little bit better,” Quinn said. “I went in (to ROOTS) thinking that I was going to be identifying with all the folks coming through, and looking at them like my brother. But instead I found I really was focusing on the folks who were there helping, and being really grateful towards them and thinking of all the people who’ve helped my brother, and who are helping my brother.”

She recalled one visit to Oakland, when she found her brother squatting in an apartment.

“The first thing he said to me, when he saw me, was ‘Don’t judge me. Don’t judge me,’” she said. “That is something that I remember because when we’re afraid, we have a lot of fear, we judge. So … when I see my brother, or I go to ROOTS, I try to not let my ego and my fears take hold, so that I don’t judge, and I can be more genuine in the experience with people.”

Nalandabodhi provided its ROOTS volunteers with a suggestion sheet about how to connect their mindful activity with their Buddhist studies and meditation. Before going, for instance, it’s helpful to explore one’s feelings, expectations and motivations. While working, one might work with emotions using “mindful gap” and patience; watching the wandering mind; noticing what’s not being accepted. At the end, a dedication of merit and a debriefing – with others or via a journal – might be valuable. 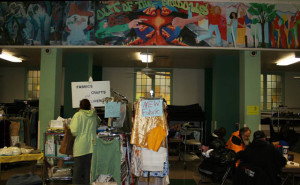 At night, the basement of University Temple United Methodist Church hosts the ROOTS shelter for homeless young adults. Every Friday afternoon the space is used by the church’s thrift store.

“I thought that sheet was very helpful – making us stop and really think. It gives you a quality of being present, which is helpful, rather than thinking of this as one more thing to check off your list,” said Genko Kathy Blackman, a Nalandabodhi member as well as a priest at Chobo-ji, Seattle’s Rinzai Zen temple.

“For me, it’s coming back to the lines from Shantideva that every morning I always say,” she said, as she sliced yellow onions for that evening’s entree – chicken curry with rice and brussel sprouts. “I have a phrase I use as a shortcut: ‘Help not harm.’ I come back to it over and over again.”

Sharing her workspace was Michelle Bromberg, 23, who also walks a spiritual path when she volunteers at ROOTS.

“I started out interested in helping people in a secular way. But now I’m inspired by my faith to serve,” said Bromberg, a Byzantine Catholic. “Christ calls us feed the hungry and clothe the naked, so it’s nice to be able to do that here.”

Travis Gowin, who has lived on the streets for four years, sat in a basement corner, writing in his journal. He recently turned 26, so he no longer can sleep at the ROOTS shelter. Now he typically spends his nights beneath an awning of the University Book Store. He carries his possessions – mostly clothing and his blanket – in a black garbage bag. 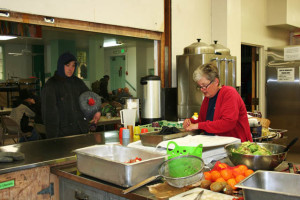 Friday Feast is open to anyone, not just ROOTS residents. So Gowin still comes by on Fridays, to hang out and eat. He has a strong philosophical bent, and he shared some of his personal views as they related to the volunteers cooking his dinner.

Dzoghchen Ponlop Rinpoche, founder of the international Nalandabodhi organization, two years ago requested that his students do “one common thing” to benefit our world. This has evolved into a global sangha commitment to donate time and resources to charities that help children, teens and young adults.

In addition to the Seattle work with homelessness, Lhabab Duchen projects within other Nalandabodhi centers and study groups include: 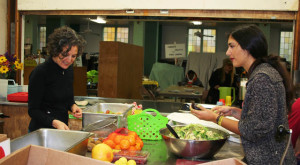 Hong Kong — Members are making donations and signing up as tutors for Principal Chan Free Tutorial World, which helps low-income, underprivileged children with their homework.

Halifax, Nova Scotia — Members are assembling an “apartment starter kit” to donate to Phoenix House, to help a young adult, couple, or single parent, ready to start out on their own.

Toronto, Ontario — This sangha has an ongoing link with The Children’s Book Bank, which provides free books and literacy support to children in low-income neighborhoods. Members donate cash and new books.

Vancouver, B.C. — This sangha has partnered with Aunt Leah’s Place, which works with foster kids and teen moms.

Tucson, Ariz. — A generous member donates to two local groups that serve homeless youth:  Youth on Their Own and EON, which serves mostly LGBTQ youth.

Boulder, Colo. — The Boulder sangha has an ongoing connection with Attention Homes, a program for homeless and at-risk youth.

0
SHARES
Share
Posted Under: 2015, Compassionate Action, Winter
About the Author: Diane Brooks
Diane Brooks has been studying and practicing meditation and energy work since the early 1980s, when she took her first classes at the Berkeley Psychic Institute. She has been on a Tibetan Buddhist path since 2005, studying first with Joel and Michelle Levey. In 2010 she became a student of Dzogchen Ponlop Rinpoche, and a member of Nalandabodhi’s Seattle sangha. She is a former newspaper journalist, writing for SF Bay Area papers and the Seattle Times, and now balances communications work with co-teaching yoga classes at Everett Community College.