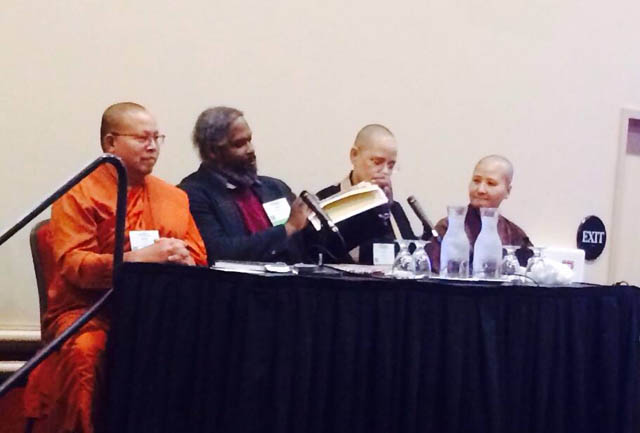 (Editor’s note: Seattle-area Buddhist monastics were among the 9,500 people attending the sixth Parliament of the World’s Religions, Oct. 15-19, in Salt Lake City. Here are impressions from Guo Cheen Shi, founder of The Compassion Network and board secretary of Northwest Dharma Association; Ajahn Ritthi, abbot of Atammayatarama Buddhist Monastery in Woodinville, Washington; and Janice Tufte, a Seattle Muslim who is very active in interreligious dialogue.) 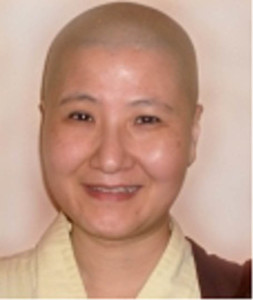 By Guo Cheen Shi: The strength of women’s voices at the parliament

Summer extended itself in Salt Lake City, Utah around mid-October, as if a sign welcoming people to the world’s largest interfaith summit. The Parliament of the World’s Religion convened this year for the sixth time, since inaugurating at the Chicago World’s Fair in 1893.

Optimism percolated as diversity about wisdom traditions, gender, and calls to action blossomed at this parliament. The indigenous representatives of the Salt Lake valley were honored in an array of invocations, opening the way for faith representatives from more than 80 religions and 50 countries to meet the spirit of the land.

The Sikhs offered daily free food called langar out of generosity and joy, serving lunch to all who wished to receive. Volunteers grew from local Sikhs to Sikhs abroad, and even parliament volunteers who wished to taste the delight of giving.

Remaining food items were reportedly donated to local food banks. All touched were suffused with charity that grew and glowed. 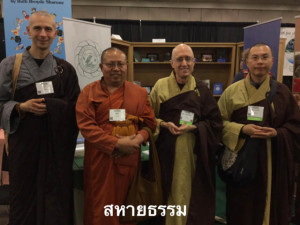 Ajhan Ritthi with monastics from the Dharma Realm Buddhist Universit y in California.

More than 50 Parliament attendees joined this session and offered positive comments. Unfortunately, this particular session, and too many parliament programs, did not include sufficient time for questions and answers.

His Holiness the Dalai Lama was sorely missed. His presence on stage at the 2009 Parliament opening, with aboriginal woman Joy Murphy Wandin of the Wurundjeri people, brought balance, light, and laughter.

In contrast, this year’s opening plenary was slightly disappointing with nine men in suits speaking, while some in the audience shouted, “Where are the women?”

This was an understandable refrain, after an entire day filled with women’s voices and leadership modeling during the inaugural women’s assembly. History was indeed being made. 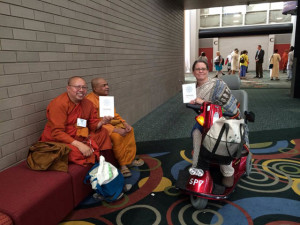 The presence of women this year was so strong that future parliaments will never be the same. Many of the female speakers at the plenaries brought the audience to their feet.

Among the women speakers, Valerie Kaur urged for a love revolution, recognizing a fellow Sikh who defended his brother and sisters from violence in the name of religion.

Rabbi Lynn Gottlieb’s refreshing rendition of Biblical parables shifted the perspectives of many there, who subscribe to unsaid and unconscious gender norms.

Marianne Williamson spoke fearlessly about the ugly history of religious institutions, possibly because she is relatively free from religious bindings and ties. Like the future generations she envisions, she is a model of a passionate and free-thinking individual not to be easily manipulated and controlled.

More than words, each parliament plenary urged that faith-goers commit signatures and actions to the following declarations:

After the parliament, those of wisdom traditions are expected to make individual and concerted efforts, as recommended by these declarations and by their plenary speakers.

Seattle friends of religious writer Karen Armstrong, who were attending the parliament, said they intend to further develop Seattle-area Charter for Compassion work, which they started in 2009.

It is hoped that dynamic interactions at all levels – between presenters and audience, between and within faiths, from the local to the global then back again —  will ensue during and beyond the parliament, to ensure that peace prevails among religions.

After all, for a period of a few days, peace did prevail, among many religions gathered at the 2015 Parliament of the World’s Religions. 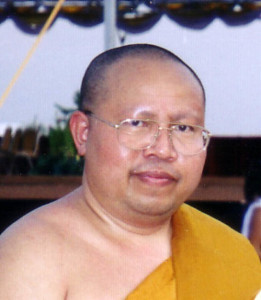 By Ajahn Ritthi: The joy of many religions gathering, and more to do

The Parliament of the World’s Religions meeting was very important to us who live in this world.  We must learn and study our own true religion, because it will help us to happily live together in peace.

Before the event, I was wondering what it would be like for all religions folk to get together at one place, and I was anxious to know more.

My dharma folks and I were very happy to meet people with different religions and enjoyed this event. We exchanged ideas about everything, there were no boundaries between us at all.  We all found friendship, harmony, and faith, and talked about global sustainability and became united.

On the second and third day of the event, we repeated the same activities, continuing to meet new people, exchanging information and enjoying meeting. Every day was a wonderful day for me and my dharma folks.

I could see many connections with the dharma during this event.  The “loving and kindness” that people gave to each other was fantastic to experience.

After being at the event, I recognized that our dharma group did not have enough activities compared to others.  I would like to suggest that as a group, we should come together to create more activities, and to invite more people to the next event.

We should have set a target to pass our true religion throughout the world.  The purpose of this goal is to learn and teach the true dharma, and to help people withdraw from materialism.

Buddhadasa Bhikkhu, a famous Thai Buddhist master, expressed his own intention regarding religion in terms of vowing to do everything in his power:

People must understand the core of their own tradition in order to have inter-religious exchange and cooperation. Only when we can speak from our own deep experiences of our respective traditions, will there be a basis for understanding the religions of other.
The ​Parliament of the World’s Religion became one organization, putting the faith of all religions together. It has  become united without boundaries or obstacles.

I appreciated being there, it has opened my mind and my heart to learn and help others be a part of this sustainable group of the dharma. 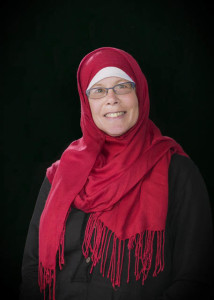 By Janice Tuft: About the contributions of Dr. Guo Cheen

During the parliament Dr. Cheen shared her wisdom to packed audiences in four separate workshops, three with only female panelists or presenters, and the fourth including Northwest Buddhist mixed gender representation.

Titles of Dr. Cheen’s Parliament workshops: “Sacred Text Interpretation: A Multi-faith Dialogue;” “Listening so We may Hear: a Meditation on Sound;” ”Explorations at the Edge of Women’s Spiritual Leadership,” and “A Spectrum of Buddhist Traditions from One Northwest Corner.”

Ajahn Ritthi is the abbot of Atammayatarama Buddhist Monastery in Woodinville, Washington, a position he has held for 16 years. He also is a board member of The Council of Thai Bhikkhus in the U.S.A., an elected position he has filled for 17 years.

Janice Tufte is a Seattle Muslim who active in interfaith dialogue and cooperation, and who has faith there is always room for education and listening to "the other." Tufte runs six poverty awareness and direct-service projects in the Puget Sound region.