The Kilung Foundation is experimenting with a new way to reach out and create a larger network of donors: tapping the internet for donors through crowdfunding.

Kilung Foundation’s crowdfunding campaign has only just begun, but already it has raised more than $11,000 for its yogurt-making project and almost $2,000 for its education programs, both in Tibet. The foundation is headquartered on Whidbey Island, about 35 miles north of Seattle. 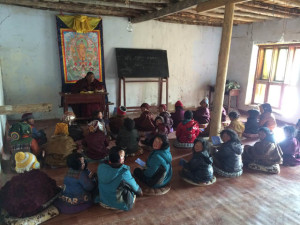 Education in the Dzachuka area of Tibet is a primary goal of Kilung Foundation.

While the Pacific Northwest is home to a diverse community of Buddhist practitioners, many of them involved in socially engaged work to bring kindness and compassion into the world, it can be hard to connect donors with need. Often Buddhist communities feel they must turn to the same members and supporters to ask for donations for their charitable programs.

Crowdfunding was made famous by Kickstarter, an early innovator in the market whose mission was to bring creative projects to life. The concept was simple: use the internet to bring like-minded groups and individuals together to finance and launch a worthy idea.

Since Kickstarter’s beginnings in 2009 the model has expanded, and now many new crowdfunding sites are raising funds for causes as diverse as charity benefits, marathon races, and cancer treatments. Crowdfunding raised over $5.1 billion worldwide in 2013. 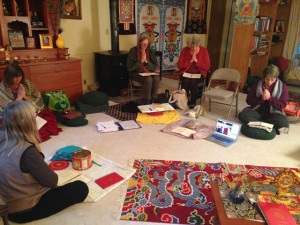 Kilung Foundation was looking for new approaches to fund its humanitarian projects in Tibet, when the idea of crowdfunding was suggested.

Founded in 1998, the organization supports the work of His Eminence Kilung Jigme Rinpoche, a well-known Buddhist teacher and traditional lama. Rinpoche lives and teaches on Whidbey Island, but also heads Kilung Monastery, a center of learning and Buddhist practice in Dzachuka, Kham, east Tibet.

Through the years, the foundation has provided aid to Tibet in many forms.  Volunteer funds have created schools for local children and monks, built a bridge across the Dza River to provide safe passage for nomad herders, and provided disaster relief, medical care and sponsorship for elders.

Most recently, Kilung Rinpoche saw a growing need for new forms of livelihood for nomad families who were facing resettlement. Pressured by the Chinese government to sell their animals and move into distant resettlement communities, nomads were losing their ties to family, to their Tibetan roots, and to the ancestral lands that had supported a traditional way of life for millennia. 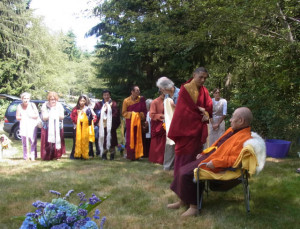 Sangha members present traditional khata offering scarves to His Holiness the Fourth Dodrupchen Rinpoche during his 2014 visit to Whidbey Island.

Rinpoche met with local Dzachuka elders and young people to explore alternatives to resettlement, and to discuss possibilities for new businesses based on nomadic traditions.

The idea of a yogurt collective arose. With seed money from the United States the enterprise began in the summer of 2015, but additional funds were needed to expand and complete the project.

The fundraising volunteers at Kilung Foundation set to work designing a campaign that might reach a broader base of support than the limited membership its meditation community on Whidbey Island could provide, and crowdfunding seemed the most logical approach. By creating a peer-to-peer campaign, the organization could use its existing donor base as a foundation for reaching like-minded friends and family who might be interested in supporting the yogurt project. 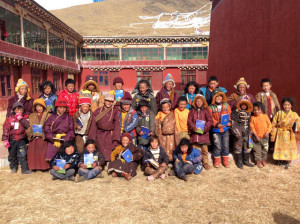 Education is precious for young people in the Tibetan highlands.

The crowdfunding website allows visitors to learn about the mission of the Kilung Foundation on its opening page, and donors can follow links to specific pages that highlight the Dzachuka Nomad Yogurt Project and The Education Program.

Each campaign is described in detail, and a contributor can choose to support a level of gift that might, for example, fund a small refrigerator for storing yogurt, or a year’s worth of meals for a young student at the Kilung Children’s School.

It’s easy to contribute by simply clicking on the donate button and following the prompts. Contributions are tallied on the opening page to track progress, create momentum and build enthusiasm.

In many ways, crowdfunding seems ideal for Buddhist fundraising, emphasizing as it does the importance of relationships. As donors reach out to friends and family and invite them to participate in good works, the positive benefits are shared with more and more people who become connected to each other, to the Buddhist teacher, and to the larger world.

Research shows that people enjoy giving to charitable causes, especially those they know are also endorsed by trusted friends.

The concept depends, of course, on the willingness of kind-hearted supporters to engage and take action, both to donate and to spread the word for a worthy cause. With crowdfunding, organizations build a groundswell of support through more modest donations, rather than depending on the goodwill of a few major donors.

Do not disregard small positive acts,
Thinking they are without benefit,
Because even tiny drops of water,
Will eventually fill a large container.

Buddhist practice encourages us to set our intention and dedicate the merit of our gifts, so that crowdfunding can become an even more powerful and expansive response to the needs of others.  If you would like to get involved, visit the Kilung Foundation crowdfunding page and join a network of Pacific Northwest Buddhists who are taking their practice of loving-kindness and compassion out into the world to make a difference.  May all beings awaken together!

Between the hermit meditating in the mountains,
And the sponsor who provides his or her sustenance,
Is a connection that will lead to enlightenment together.
The heart of that connection is the dedication of merit.

0
SHARES
Share
Posted Under: 2015, Sangha News, Winter
About the Author: Betty Holmes
Betty Holmes is a longtime Buddhist practitioner in the Tibetan and Zen Buddhist traditions. She practices with the Pema Kilaya meditation community on Whidbey Island and leads fundraising for the Kilung Foundation.