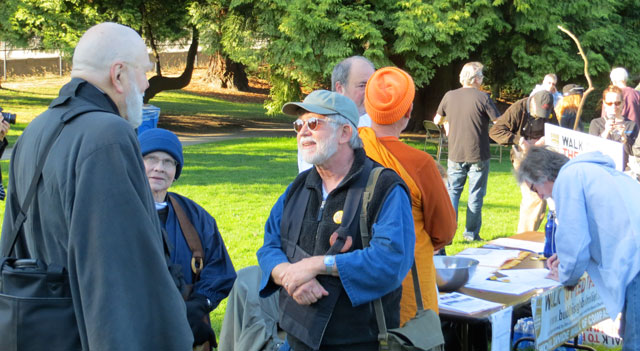 Forty five people joined in Seattle’s first Walk to Feed the Hungry Oct. 6, a local event that was just one of a worldwide series of walks organized by Buddhist Global Relief.

That organization, founded in 2008 by well-known Buddhist translator Bhikkhu Bodhi, is committed to demonstrating loving-kindness and compassion in action, with a specific focus on alleviating suffering due to chronic hunger and malnutrition.

The Seattle event was co-coordinated by Jeff Carl and George Draffan, both former board members of Northwest Dharma Association. 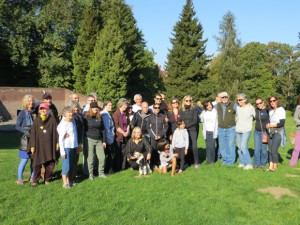 A happy group of walkers before the start, at Seattle’s Volunteer Park, on Capitol Hill.

Before the walkers started on the three-mile route, they engaged in a 20-minute  tai chi and qi gong warm-up session, led by Dorotha Carl. Standing in a circle, the participants performed centering and stretching movements that built a sense of togetherness, a wonderful preparation for the walk.

After hearing a short talk about Buddhist Global Relief and its goals and methods, the group set off.

Many dharma groups also were represented, including a large contingent from the Nalanda West sangha in Seattle.

The route wound through Seattle’s Capitol Hill neighborhood, past stores, bars, ball fields, and coffee houses.  Several passersby joined in, recognizing the walk as a movement of peace and unity, and the other people along the way showed appreciation for the walkers’ objectives. 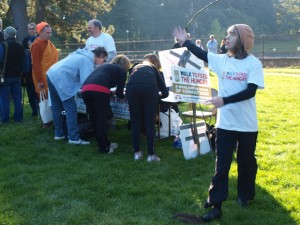 Dorotha Carl leads the walkers in qi gong before the walk begins.

The walk ended at about 11:30 a.m. for a shared lunch, and over food the walkers swapped stories and thoughts on Buddhist practice. After lunch the registration tables and signs were taken down, and many walkers expressed their intention to walk again in 2013.

Ven. Bhikkhu Bodhi created Buddhist Global Relief in response to the fact that things many people in the West take for granted –food, shelter, and education –are tragically denied to millions of people around the world. It’s a sad fact that even today more than 10 million people die each year of hunger or hunger-related illnesses, half of them children.

Troubled by the real suffering of poverty and want that afflicts over half of humanity, Bhikkhu Bodhi saw the need for a Buddhist organization dedicated to social justice.

BGR’s aims, as enumerated in its mission statement, are:

As Bhikkhu Bodhi has said, “We’re living at a transformative moment of history. As I see it, humanity is faced with a critical choice: either we continue to flow with the currents of greed and ignorance and risk devastating the earth, or we adopt a scheme of values that gives pride of place to compassion, care, and social justice. If as Buddhists we’re to respond to this call, we have to put into action the great compassion that lies at the heart of the Buddha’s mission.” 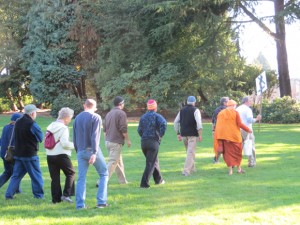 BGR’s Walk to Feed the Hungry fundraisers, now in their third consecutive year, benefit not only the organization’s projects but  local charities as well, such as food distribution centers in the areas where the walks are held.

This year BRG coordinated 12 walks around the world, including the Seattle walk.

Other U.S. walks were coordinated in New York, Connecticut, Michigan, Chicago and California. The first international walks were this year in Nagpur, India; Banteay Meanchey, Cambodia; and Yorkshire, UK.

The India and Cambodia events were particularly touching, as the participants were direct beneficiaries of BGR programs. Despite their hardships these people were determined to demonstrate their gratitude and perseverance, by walking in their local communities.

Organizers hope these “Walks to Feed the Hungry” will become an established tradition in Western—and even world Buddhism—and a way to actualize BGR’s vision statement:

0
SHARES
Share
Posted Under: 2012, Compassionate Action, Winter
About the Author: Jeff Carl
Jeff Carl is an attorney in Seattle. He is a former board member of Northwest Dharma Association, and practices Buddhism in the Theravada / Thai Forest tradition.