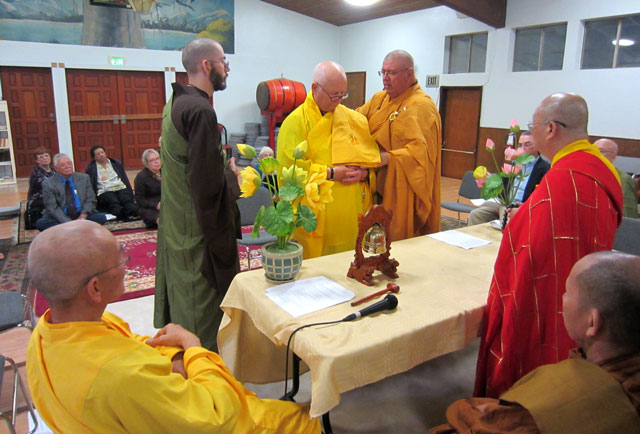 Kobai Scott Whitney, well known in the region for his work in prisons, has opened a new chapter in his life by ordaining as a novice monk in the Linchi (Rinzai) line of Vietnamese Zen Buddhism.

Due to his extensive life experience as a Buddhist practitioner and teacher, Whitney will spend only a year as a novice before being ordained a full monk.

As a monk Whitney has committed to a celibate lifestyle as a monk in the Vietnamese Thien tradition, and is now considered a teacher at Mount Adams Zen Center, as well as for the Plum Mountain Buddhist Community.

The ordination ceremony was performed on Oct. 15 at Chua Lien Hoa, a Vietnamese Buddhist temple in Olympia, Wash.

Presiding was Kozen Sampson (Thich Minh Tinh), a monk and teacher in the Vietnamese Zen tradition, with whom Whitney has been practicing. Sampson is abbot of Mt. Adams Zen Center in Trout Lake, Wash. 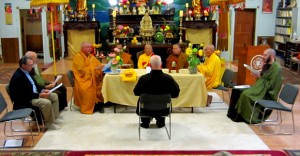 Whitney is best known for his prison dharma work, having spent many years teaching Buddhism to incarcerated men and women.

Based on these experiences he wrote “Sitting Inside: Buddhist Practice in America’s Prisons,” a guide for those interested in or involved with prison dharma work.

Whitney came to the Pacific Northwest in 2004 to become the Buddhist chaplain for the Washington State Department of Corrections. Since 2007 he has been the guiding teacher of the Plum Mountain Buddhist Community in Aberdeen, Wash.

As guiding teacher of Plum Mountain Buddhist Community, Whitney has focused the sangha’s work on marginalized people, and those recovering from trauma, homelessness, divorce, domestic violence and losses of various sorts.

Plum Mountain members are active in the community, and Whitney said they “partner with the 12-Step communities, jails, prisons and services for the hungry and the mentally ill.”

Whitney’s Buddhist path has been a long and fruitful one. He practiced Zen for many years with Issan Dorsey at San Francisco Zen Center, and with Robert Aitken Roshi at Honolulu Diamond Sangha. It was Aitken who gave him the dharma name “Kobai,” or “Old Plum Tree.”

Since moving to Washington Whitney has practiced with the Olympia Zen Center and the Cloud Mountain Retreat Center. In recent years he has been exploring Buddhism’s roots by practicing and studying in the Theravada tradition.

Family and friends there to support Whitney at his ordination included his son Stanley, and a half dozen or so of his peers and associates from the Christian ministry.  Friends and supporters from the local Buddhist community included Gansho Lenny Reed and Hadashi Jeff Miles of Mountain Way Zendo, and Koro Kaisan Miles of Open Gate Zendo.