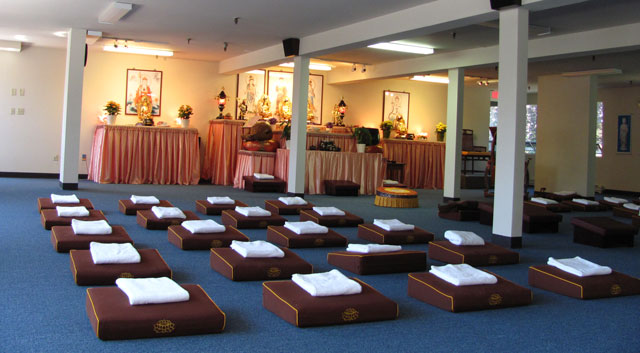 The Buddhist hall: the seats and the altar, with the images of Amitabha Buddha and his two companions enshrined in the center, and those of Ksitigarbha (Dizang) Bodhisattva and Bhaisajyaguru (Yaoshi) Buddha, on their right and left.
Photos by: Andy Lee, Wu Liang, Melissa Lin, Steve Wilhelm

The temple, part of the much-larger Hwazan Buddhist Foundation based in Taiwan, operates from a large temple complex, converted from a former nursing home. 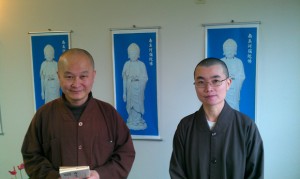 Wu Kai and Wu Liang, the resident dharma masters and monastics, were for many years teachers at another Hwazan Pure Land center in Dallas, Texas, before coming to Renton in 2008.

Many people who attend Buddhist retreats at the Renton temple have been under the teachers’ guidance since they were in Dallas, and have built up strong relationships with them. The Renton temple currently has about 50 members, but the organization worldwide numbers in the thousands.

People are always welcome to visit the Hwazan Buddhist Foundation temple in Renton. In the temple’s primary Buddhist hall, where Amitabha Buddha and his companion bodhisattvas Avalokiteshvara (Chinese: Guanyin) and Mahasthamaprapta (Chinese: Dashizhi) are enshrined, people can meditate, chant the names of the Buddhas and Bodhisattvas, read Buddhist sutras, and circumambulate at will. 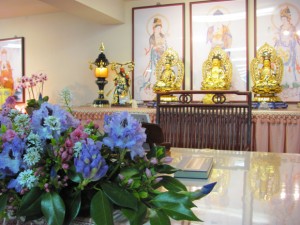 The setting for the seven-day Buddhist retreat includes statues of Amitabha Buddha and his two companions Bodhisattvas Avalokiteshvara (Guanyin) and Mahasthama (Dashizhi), and the statue of the Dharma protector Lord Guang (Guangong)

The temple is a good place for circumambulation—walking clockwise around Buddhas and bodhisattvas—a practice that dates from ancient Indian Buddhism. Circumambulation is a good exercise for concentrating the mind and for keeping the body active.

At the temple people can naturally refresh their understanding of Amitabha Buddha, by seeing his image in the hall and by hearing his name chanted there. Here is a peaceful place for people to do Buddhist practice.

Many Buddhist practitioners visit the temple and practice quietly on weekdays and weekends. No matter people’s primary Buddhist tradition, be it Zen, Tibetan Buddhism or any other, they are always welcome at the temple. 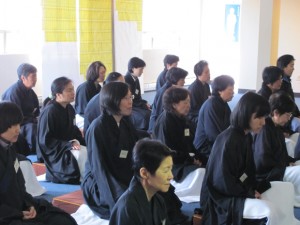 The participants, sitting still and silently and meditating on Amitabha Buddha, during the seven-day Buddhist retreat.

People are also welcome to attend Buddhist lectures given by the abbot, Master Wu Kai, from 2 pm to 4 pm every Saturday and Sunday. He expounds on a wide variety of texts including the sutras on Amitabha Buddha and the Pure Land, and texts on other Buddhas and the Buddhist practices associated with them. The texts, though with different focuses, all teach us to shed delusion and to penetrate the truth of the universe.

According to Pure Land tradition, the easiest way to liberation is to be reborn in Amitabha Buddha’s Pure Land. With compassion, Amitabha Buddha made 48 vows to bring all people to his place, regardless of their ages, genders, or the transmigration paths they are in.

Visitors are welcome to ask the masters about Amitabha and the ways to get rebirth in his Pure Land, and to experience spiritual purity by chanting Buddha’s name. 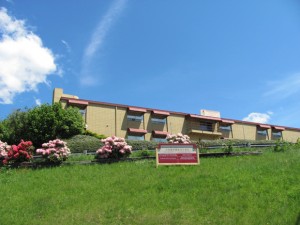 Located on a slope and in a quiet area, the Hwazan Buddhist Foundation is a place for attentive Buddhist practice.

Anyone is also welcome to the twice-yearly seven-day Buddhist retreats at Hwazan Buddhist Foundation temple, scheduled with a one-day salvation service. The seven-day retreats take place in May and September.

The seven-day retreats are times to entirely concentrate on Buddhist practice and therefore selflessly benefit loved ones. During the retreats, which attract people from Asia and from all over North America, participants devote themselves to chanting the Buddha’s name and to meditating day and night. In the end they can make remarkable progress on the path.

It is always impossible to completely describe what a person can get from a visit, which is not sightseeing, but a spiritual journey. Come and experience it.