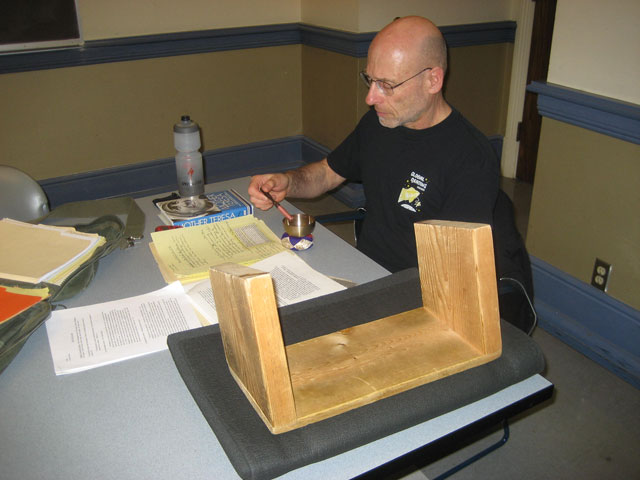 This fall, for the fourth time, I taught a course on Buddhism and Western psychology – a topic that’s been at the heart of my intellectual life since I was old enough to have an intellectual life.

I taught the course under the auspices of the Experimental College, run by the Associated Students of the University of Washington, in Seattle. The course title is “Buddhist Insight Meditation and the Psych of Spiritual Development.” (I had to shorten psychology to psych, to fit the title into the catalogue’s computer template.)

After retiring from a career as a university professor in psychology, and after a lifelong interest in spiritual development, I missed teaching.

So when I discovered the opportunity to teach a course of my own design through the Experimental College, I jumped at it. I put together my favorite topics from my two graduate seminars, and thus was born the course I now teach, which bridges Buddhist teachings and modern psychology, with an emphasis on meditation practice. This past quarter the class met in a small (capacity 15) seminar room – perfect for my purposes – in Smith Hall, in the middle of UW’s main campus. 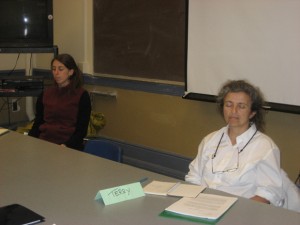 My students have ranged in age from their 20s to their 70s. Most had never meditated before (I give them beginning instructions the first night of class), but some already have well-established practices.

One was a past president of the Northwest Dharma Association, and editor of this very newsletter (Hi Julie!). One had a master’s degree in comparative religion. Most just came across the course in the catalogue of the Experimental College, and their curiosity was piqued.

A few I already knew – friends and neighbors who wanted to hear more of what I talked about so much, and which seemed to mean so much to me. Some were people I had met while ride-sharing to retreats at Cloud Mountain, a Washington state retreat center, or in local sitting groups I attended. More than a few were looking for something to help them deal with stress.

I begin the course, even before our first meeting, by emailing the students a link to an article, by Buddhist teacher Shinzen Young, which was my own first introduction to Buddhist meditation, in 1983.

This serves as the taking-off point for our first class, during which I talk about the basics of meditation – attention and equanimity; seeing deeply and clearly into the nature of things (vipassana); and accepting our experience as it is, without pushing away the unpleasant (which is aversion), nor holding on to the pleasant (which  is craving). 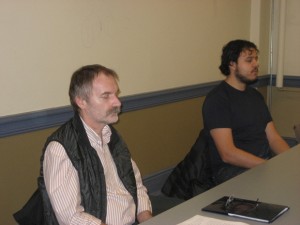 I also introduce  the basic philosophy of Buddhism, essentially the Four Noble Truths: The assertion that ordinary human experience is, fundamentally, suffused with dukkha (suffering, unsatisfactoriness); the assertion that the cause of dukkha is our habit of responding to our experience with craving, aversion, and not seeing clearly and deeply into its nature; the assertion that we can change that habit of responding and thereby diminish (and ultimately end) dukkha; and a methodology for accomplishing such change (The Noble Eightfold Path), at the heart of which is meditation.

The rest of the quarter (in addition to however much time students want to spend asking questions about and discussing their own meditation experiences), is spent exploring the parallels between what the Buddha taught and various theories and research from Western psychology.

For instance, Sigmund Freud emphasized how the repression of unpleasant (traumatic) experiences during childhood gives rise to neurotic symptoms in adulthood. He explored the role of psychotherapy in lifting such repressions, thus making the unconscious conscious, as a means of alleviating such symptoms.

How does that understanding of Freud’s apply to the role of Buddhist meditation in diminishing the habit of aversion, thus enhancing one’s capacity to see things as they really are? Is meditation not also a process of making the unconscious conscious? Might meditation be seen as a form of psychotherapy? Or is it something more than that?

Psychologist Erik Erikson talks about the development of a healthy sense of identity, or self, as being at the heart of healthy psychological development. The Buddha, on the other hand, talks about the realization of anatta (or “no-self,” the doctrine that the self is not fundamentally real), as being at the heart of spiritual realization. Can Erikson’s theory and the teaching of the Buddha be reconciled?

Jean Piaget’s theory of cognitive development suggests that one’s experience of reality is a personal construction, a result of the activity of the knower (as opposed to a passive reception, a more-or-less accurate copy, of external, objective reality). How does Piaget’s view compare to the Buddha’s doctrine of “dependent origination”? 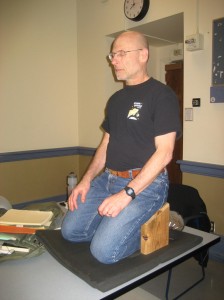 Perched on a desk, instructor Joe Pearl shows the proper use of a seiza bench.

My own interest in spiritual development, and Eastern spirituality in particular, stems from an adolescence spent in the late 1950s cultural milieu of the “Beat Generation,” (Jack Kerouac, Allen Ginsberg, et al.). As an introspective and philosophically inclined teenager at that time, I began asking the essential questions: “What is the meaning and purpose of life?”, “Does God exist?”, and “Is there life after death?”

Those questions led me to major in psychology as an undergraduate, and to get a doctorate in psychology and education, during which my academic interests gradually became focused in the areas of human development and Transpersonal Psychology.  These areas of study include spiritual development, and altered states of consciousness.

After completing a doctoral dissertation titled “The Effects of Marijuana on Human Cognition,” in 1971, I embarked on a 26-year teaching career in educational psychology, at Oklahoma State University. (Not exactly a hotbed of Transpersonal Psychology at that time, or since.)

At first I taught conventional courses in educational psychology, child psychology, and human development, including just a bit of my interests in spiritual development and altered states of consciousness. For instance, I would play students a tape of a 1970 lecture by Baba Ram Dass, author-to-be of the famous meditation primer “Be Here Now,” as a kind of alternative view to the Western psychological theories that made up the main subject matter of the course.

During those years, my personal interest in spiritual development (and spiritual practice) continued to develop. I learned Transcendental Meditation in the mid ‘70s, though it never really took, for me.

In 1983 I audited a class in Buddhism, during which I read an article on meditation by Buddhist teacher Young, and then attended a meditation retreat, my first, taught by him.

As I learned more about Buddhism, I began to suspect that I’d finally found a spiritual home – a place to find answers to those questions that I’d begun asking in adolescence. Young became my first primary teacher, and ever since I’ve been practicing Buddhist insight meditation, also called vipassana, and regularly attending retreats.

As time passed, I found more and more of my interests in Buddhism and spiritual development were working their way into my courses.

Eventually, I developed a couple of graduate seminars – “Transpersonal Human Development,” and “Altered States of Consciousness in Human Development” – focusing on the relationship between psychological and spiritual development, with a special emphasis on Buddhism and meditation, and those became my favorite courses to teach.

The main topic of the last class in the course I teach at the Experimental College is that of theism: the possible existence and nature of God (or the Godhead, or Brahman, or the Absolute, or the Ultimate State of Consciousness, or One Without a Second).

After our last class this past quarter, one of my students, Terry, said to me, “That’s your favorite topic, isn’t it?” I’m not sure that it is, I very much enjoy all the topics covered in the course, but it is the one that puts all the other topics in the broadest-possible perspective, and there is a special satisfaction in that. And it provides the final step in arriving at a truly satisfying answer to those fundamental questions I began asking so many years ago.

After that, for me, there is only practice.

Sound interesting? Come join me. I’m always looking for new students, and I’ll be teaching my class at least once or twice a year for the foreseeable future. Keep an eye on the Experimental College catalog, or email me, at jandnpearl@comcast.net, and I’ll put you on a list to be notified the next time it’s offered.

0
SHARES
Share
Posted Under: 2012, Dharma Education, Winter
About the Author: Joe Pearl
Joe Pearl received his doctorate in psychology and education from the University of Michigan in 1971. He taught human development and transpersonal psychology at Oklahoma State University from 1971 until 1997, when he retired and moved to Seattle. He has practiced Buddhist insight meditation since 1983.