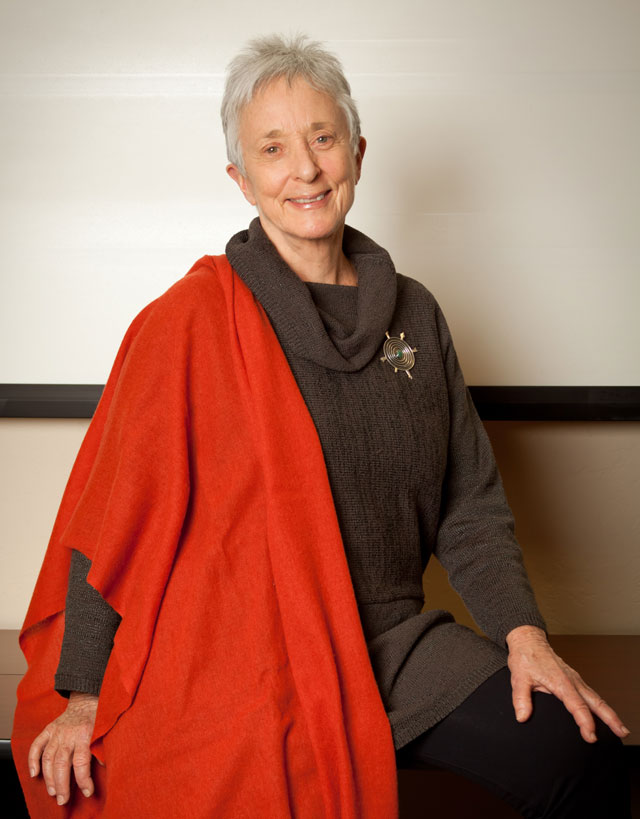 Anna Douglas, lead teacher of “The Experience of Aging as a Dharma Practice” retreat at Cloud Mountain.

Twenty four people explored aging as a dharma practice in early December, during a five-day retreat led by Anna Douglas, a senior dharma teacher deeply engaged with the subject.

Douglas, a founding teacher at Spirit Rock Meditation Center in California, led the retreat at Cloud Mountain Retreat Center in Washington. She was assisted by Robert Cusick, also from the Bay area. It was the second such retreat she’s offered.

Douglas, 73, has been increasingly interested in the issue of aging and practice as she has grown older, and has realized the needs of older adults were not being met in the retreats she and other teachers were offering. For the past six years she has taught classes and led day-long sessions around these issues, and in October led her first five-day retreat devoted to the subject. 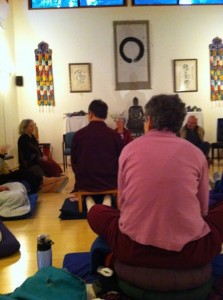 A retreatant asks a question while others look on.

During the Cloud Mountain retreat she spoke about the natural flow of teaching the dharma, and exploring these issues in practice, because dealing with the heavenly messengers of sickness, aging, and death are some of the core conditions about which the Buddha taught.

Most of the 24 on retreat were women, with ages ranging from the mid-50s to the early 70s.  Most were from Seattle and Portland, with a scattering from smaller cities and towns in Washington and Oregon, and one from Vancouver, B.C.  Having some retreat experience was a prerequisite for practice, and many of the attendees were long-term dharma practitioners.

Simply put, the retreat was extraordinary.  From the first evening’s orientation, Douglas and Cusick created a container both safe and sacred.  The retreat was held in noble silence, but included more verbal interaction between participants and participants and teachers than is typically true in this style of Vipassana practice.

Every day we engaged in Contemplative Inquiry and Dharma Contemplation exercises, in addition to the usual interviews with the teachers. The latter were conducted in groups during this retreat, one session with each teacher.

Contemplative Inquiry is an exercise in which Douglas posed questions, such as, “What keeps me from being present?” or “Who would I be without my story?” which we then explored in pairs or trios. 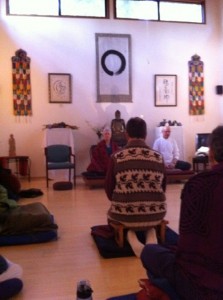 The retreatants settle into meditation.

As a complement Ellen McCowan graciously offered daily Qi Gong practice, so each afternoon, after the inquiry exercise of the mind and heart, we had the opportunity to exercise our bodies.

Almost all retreatants joined in, and the meditation hall was transformed to a gentle swaying of forms and chi.  It was an unexpected and very lovely offering, and another way for the sangha to bond.

We did the Dharma Contemplation in the large group. This consisted of one or more of us reading a sutta or teaching, and then all of us contemplating and reflecting on the reading in increasingly deep and more personal levels, and finally sharing our thoughts, feelings, pain, insights and new understandings aloud.

The level of our interactions was so honest, vulnerable, and respectful, it was stunning in its beauty. Douglas remarked that the power of the Dharma Contemplation is seeing wisdom at work in the entire group, rather than relying solely on teachers for these understandings.

The first day Douglas spoke briefly about the scientifically researched and documented health benefits of meditation practice for the elderly, including decreased loneliness, increased cognitive abilities such as decision making, attention, and memory, improved immune response, as well as others. 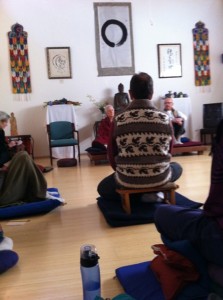 When asked how the dharma might aid us in coming into a deeper peace with aging, the retreatants responded with words such as steadiness, perspective, compassion, courage and calmness.

Douglas gave some basic meditation instructions at the beginning of the retreat, and then encouraged us to use our skills to look more directly at our experience of aging. How do we meet our suffering, and how can we use the fact of impermanence and emptiness to help us, as we age, get sick, and face the end of our lives?

In our first Contemplative Inquiry we explored what the reality of experiencing aging is like: not what we think it should be like, or how we think it should feel, but what the experience actually is. The invitation, opportunity, and deep desire to explore the truth of aging, though sometimes scary, was also refreshing and gratifying.

Douglas then introduced the “three characteristics” of reality: anicca (impermanence), dukkha (suffering or unsatisfactoriness), and anatta (no-self or emptiness), which she referred to as “the three wisdom doors.” Using the inquiry and contemplation exercises and looking through the lens of each of the three characteristics, we discovered how we deal with issues of aging.

Dukkha was the first we explored.  With gentle guidance from Douglas and Cusick we were asked to examine in our sitting and walking meditations how we meet dukkha, and how we resist, notice and open to it, all of this in relationship to the challenges and gifts of aging. 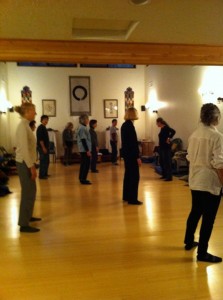 The following day we used anicca as our focus. Douglas called it the linchpin of the “heavenly messengers,” because the nature of change is often what causes our suffering. We were encouraged to notice the beginning and ending of breath, sound, thought…of all phenomena.

Finally we looked at anatta, and in doing so questioned our self-identity, and the self-images we create about ourselves.  Douglas said the Buddha offered a radical redirection in his teachings, by using mindfulness to be aware of the present moment without adding on our ideas, thoughts, and feelings about what we see and who we believe ourselves to be.

All of this may sound serious, solemn, and sobering.  And it was.  But we also enjoyed many moments of humor, and laughter both raucous and heartfelt.

Douglas is very funny and has a great depth of kindness and intelligence.  Her smile and laughter, her friendliness, were filled with mirth.

Cusick, 67, was lovely as well, and very present and compassionate.

He is currently enrolled in a program at Stanford University, funded by the Dalai Lama, to train teachers of compassion, and he spoke of his experience in practice as he ages, noticing ripening and flowering of compassion for himself and others.  He said as he ages he is more able to allow experiences in their totality, even if he doesn’t understand their full meaning.

Douglas spoke finally about how we can connect to our lives and to each other in our vulnerability and humility, instead of in our achievements and ego identities. She called this clear seeing.

She left us with the question, “As we age in the dharma, can we be compassionate companions for each other?”

Seamless though the retreat was, this was the first time Douglas and Cusick have taught together.  Cloud Mountain has invited them to return next year.  I plan to be there.

The deepest of bows to my 26 teachers.

0
SHARES
Share
Posted Under: 2012, Dharma Education, Winter
About the Author: Iris Antman
Iris Antman has been practicing Buddhist meditation for five years primarily in the vipassana tradition, with some exploration of the Tibetan and Zen traditions. She is gratified by the confluence of the various teachings.She is a retired nurse, an artist, a massage therapist, and has a small landscaping business. She attends Seattle Insight Meditation Society regularly.