One of my wife’s and my earliest Buddhist teachers recently suggested we create a regional center for Buddhist cremations and sacred memorials at Greenness, our high-bluff view property in north Edmonds, Wash.

While skeptical at first, I’ve come to realize the proposed Greenness Memorial Park not only promises profound blessings and benefits for the Pacific Northwest and its growing Buddhist community, but also offers an independent, lasting, and karma-pure source of revenue to make them attainable.

Given its central location, relative seclusion, and rare beauty, Greenness could become a very popular and inspiring place of remembrance for Buddhists of all nations and traditions throughout the region, as well as a sacred monument to enlightened consciousness, and to those whose lives have manifested that consciousness to greatly benefit all beings.

Inspired by our teacher’s idea, our current plans for Greenness Memorial Park include contemporary and traditional Tibetan crematories, and a five-story stupa~columbarium to preserve and display the remains of those cremated.

Photographs (except aerial) and drawings by Phillip Lehn

Greenway’s profits helped Rinpoche rebuild monasteries destroyed during the Communist and Cultural revolutions in Tibet. Once realized, Greenness’ profits will be dedicated to creating non-sectarian Buddhist crematories and stupa~columbariums, and their related living, learning, wellness, and worship centers in similar locations throughout the world.

Greenness currently includes one home and three (possibly four) of the last undeveloped lots, within a 30-minute toll-free drive of downtown Seattle, Bellevue, and Everett, with unobstructed views of Puget Sound and the Olympic Mountains.

The property is near a large and largely native regional park and Puget Sound beach, and opens to a large expanse of native woods and wildlife habitat stretching along the bluff for several miles. This native expanse protects the property’s privacy, seclusion, and unspoiled views. 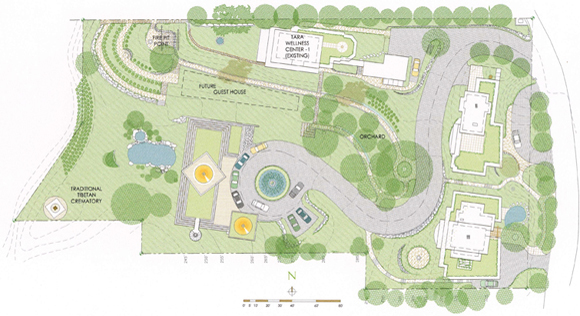 Visitors could linger in the park, reflect on the lives memorialized, and be refreshed and restored by the place’s tranquility and its paths, gardens, and duck-and-fish pond, as well as its shrines and prayer wheels.

Because today’s crematories incinerate and pulverize everything to such a uniform consistency that sacred relics can’t survive the process, we believe Greeness needs two kinds of crematories:  a technically advanced, odorless, and smokeless crematory for most cremations, and a traditional Tibetan crematory for the most realized teachers and practitioners.

As shown on the proposed site plan and elevations, the traditional Tibetan crematory is to be set apart from the main columbarium on a small knoll overlooking the bluff, while the contemporary crematory is located in a separate building off the main floor of the columbarium.

The proposed stupa~columbarium is to be a largely open-air five-level concrete and wood structure, tapering like a pagoda. Cubes of glass, one or two feet across, would display urns containing cremation remains in the building’s floor-to-ceiling walls, and in the curving shorter walls along the orchard’s paths and in other parts of the park.

Along with three levels of cremation remains, the proposed stupa~columbarium is to include a small chapel and shrine, a private reception space, and office space. The upper level would display the urns of those cremated in the traditional Tibetan crematory, and the roof garden would feature views of Puget Sound and the Olympic Mountains, and prayer wheels to spin while circumambulating a large golden stupa. 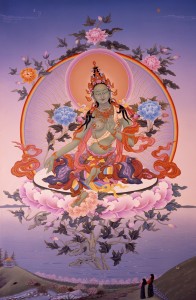 Developing only one or two lots as crematories and columbarium, and the others as residences, would invite too many incompatible uses to share close proximity. Greenness’ existing residence and two upper view lots near the street would be ideal locations for the previously proposed Tara Wellness Center, a non-sectarian Buddhist living, learning, wellness and worship where some of the region’s dharma students and guests could live and study with highly realized teachers.

Our vision is that Greeness Memorial Park and Tara Wellness Center would share many benefits. The center could care for and operate the park, and the latter’s crematory and columbarium fees could fund the center.

Our neighbors have been very supportive during the past 18 years and several have become good friends.  Our initial street standards variance application was supported unanimously by everyone living along the street.

City of Edmonds Planner Michael Clugston has said that some form of Tara Wellness Center could be permitted, and he and City Attorney Jeff Taraday have helped define the permitting process, and the code amendment, needed for the proposed Buddhist crematories and stupa~columbarium.

While some neighbors may oppose the proposal initially, I believe most if not all will eventually agree the memorial park and wellness center would improve the neighborhood, boost surrounding property values, and be far preferable to the increased daily traffic, noise and pollution that would be generated by four new large homes .

Little time remains. GTi must pay off the liens, interest, legal fees, and property taxes held against its upper two lots within the next several months or lose them. Given our circumstances, we are interested in any proposal that might fund the project.

By selling Greenness’ lots to an individual or group who agrees to donate them to the proposed Greenness Memorial Park-Tara Wellness Foundation, once it becomes non-profit we could obtain the funds needed to secure the property, continue our work, and repay an adequate part of our 20-year investment. If our vision doesn’t move someone to contribute within the next few months, it’s unlikely the project will be realized.

All of Greenness lots, including the existing residence, can be purchased now and donated when the foundation becomes non-profit. In this way we could secure the property, continue our work, and repay much of our 20-year investment.  If we don’t win the city’s approval for the proposed crematories and stupa~columbarium, establish GMP☼TWC’s non-profit foundation, or raise enough money to secure the property and meet our expenses, would-be donors could keep or sell the lots, or donate those lots to TWC’s non-profit foundation.

Benefactors can also donate any amount to GMP ☼ TWC directly. Donations not used will be held in a separate, interest-bearing bank account until transferred to the project’s non-profit foundation. If the project isn’t realized, remaining funds will be returned to donors.  We believe investors could realize a financial return, as well as merit, from their investments. If someone isn’t moved to provide the money needed within the next several months, this rare opportunity will be forever lost.

Buddha taught only merit and wisdom accumulate to our future lives, an abundance of both is needed to become enlightened, and the supreme means of accumulating both is through building monasteries and teaching centers, especially where none existed before. 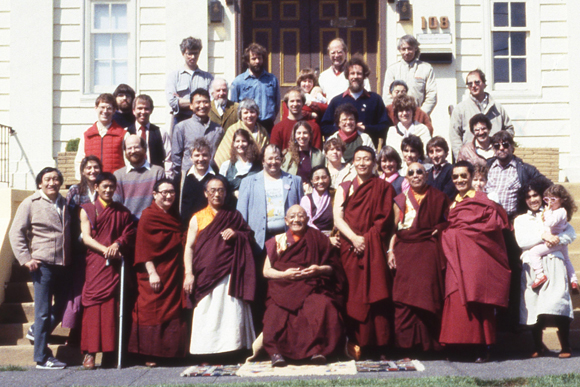 0
SHARES
Share
Posted Under: 2012, Compassionate Action, Winter
About the Author: Phillip Lehn
Phillip Lehn and his wife Mariam became Buddhists when His Holiness Jigdal Dagchen, and Her Eminence Dagmo Sakya, married them 35 years ago. Since then he has helped Dagchen Rinpoche, and His Eminence Ngawang Migyur Migyur Rinpoche, realize many of their graphic design, architectural, and community design projects in the Northwest, India, and Taiwan.