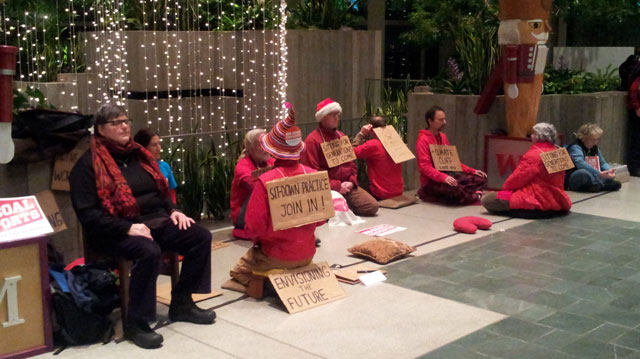 The meditators witnessing against the proposed coal terminal were surrounded by holiday lights, and joined by a nutcracker statue.
Photo by: Steve Wilhelm

About 10 people, including members of Seattle’s Buddhist Peace Fellowship as well as some contemplative Christians, gathered to meditate together during the Dec. 13 public scoping hearing for the proposed Gateway Pacific Terminal.

The proposed coal export terminal, which would primarily ship coal to China, is to be built near Bellingham, Wash., by Seattle-based SSA Marine.

While thousands of people were hearing and giving testimony on the sixth floor of the Washington State Convention Center in Seattle, the small group of meditators practiced deeply in a large lobby area several floors below. The meditators radiated an aura of peace that encouraged people on both sides of the debate to slow down and look within, as they were walking past.

The terminal has been strongly opposed by many in the environmental community, on the grounds that it will contribute to climate-changing coal burning, and will increase coal car traffic through Washington neighborhoods. Proponents say it will create regional jobs, and won’t contribute to a net increase in global coal burning because China will get coal from elsewhere.

0
SHARES
Share
Posted Under: 2012, Compassionate Action, Winter
About the Author: Steve Wilhelm
Steve Wilhelm is editor of Northwest Dharma News, and a former board president of Northwest Dharma Association. He practices with Seattle Insight Meditation Society and other groups, and contributes as a board member of Tibetan Nuns Project.