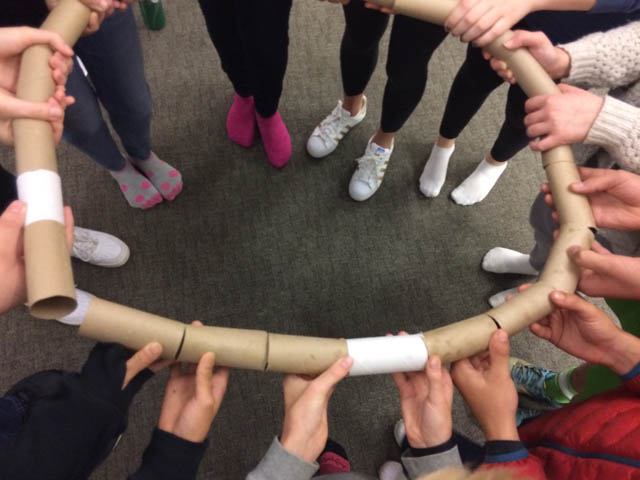 Students doing an activity in noticing emotions when having to work with others.
Photos by: Ann Hollar

The staff at Roosevelt was particularly interested in implementing a well-being curriculum after two students died by suicide. The pattern to which staff is responding, of students feeling increasingly inclined to depression and anxiety, and reporting increasing stress, has been growing at schools across the United States. 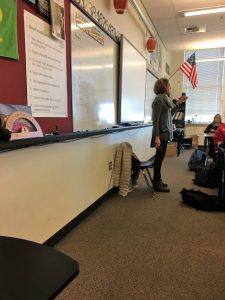 In October the New York Times reported on rapidly increasing stress among young students, citing an American College Health Association study that concluded that 62 percent of 2016 college freshman reported “overwhelming anxiety,” compared to just half in 2011.

After meetings with the Roosevelt intervention team over the summer of 2016, we created the first year-long weekly mindfulness curriculum to be implemented school-wide. The intent was to help students begin to understand how they can relate differently to stress and other difficulties of their lives, through learning more about how their thoughts, emotions, and internal beliefs shape their views of the world in which they live.

The hope is that by giving students tools to navigate their internal world, they will learn to better manage carrying heavy course loads while also participating in sports and other extracurricular activities.

The two high schools’ actions parallel a bold initiative the Seattle Public Schools is taking, to provide many elementary and middle school students a form of self-awareness practice. The Yale-developed program, called RULER, helps students be more aware of their emotions, and better able to name those emotions. 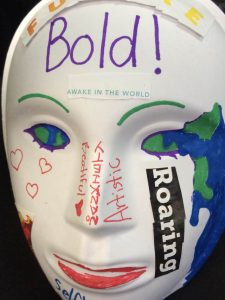 From a teens class, exploring the masks we wear.

At the high schools we begin the year with a teacher training where we talk about presence. One effective way for teachers and students to viscerally understand presence, or lack thereof, is by doing a mindful listening exercise.

I have the class divide up into pairs sitting next to each other, called dyads, as a listening exercise. During the dyad exercise each partner takes two turns as listener while the other speaks, before they switch roles.

During the first session the listener often is completely distracted. And inevitably, as the speaker shares their experience afterwards, we learn that this distraction caused the speaker to feel she or he wanted to say less, share less, and basically withdraw.

Just this simple beginning can be awakening for students. For instance, many of them realize the deep impact their distraction, due to phone use, has on those around them. 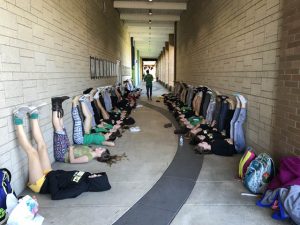 Many students confess they’d never thought their distracted way of listening had an impact on other persons, so for them this exercise is quite eye opening.

With the second round the listener is told to fully listen, not just for what is said, but also what is unsaid. The shift in the room is always beautiful – bodies are leaning toward each other, there is lightness, a sense of warmth and connection.

In the second-round debrief, one recent student declared, “This person could be my new best friend!”

The listeners don’t say anything, they just listen. And yet when we know we are listened to in that way our hearts continue to open, and we want to say more, to share more. Especially when the listener holds the space with care, we connect on a heart-felt level.

In the second month we offer a series of lessons around thoughts, talking about how our busy minds can pull us out of presence. 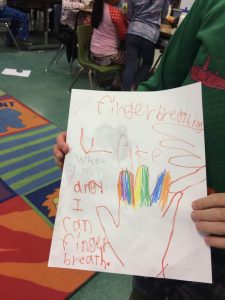 Using finger breathing as a way to settle down when angry.

Every single student I teach can quickly highlight how much time they spend in their head catastrophizing, rehearsing, rehashing, blaming or caught in stories.

For these lessons we do a number of different activities. One is where a scenario is read, usually along the lines of a student planning to meet up with another student at a given time and place, who never shows up. The first student is then asked to write what they were thinking and feeling as a result of the scenario.

The initial scenario leaves most students feeling the other person bailed on them, forgot, or perhaps didn’t really want to be their partner after all. The mind is quick to fill in the missing gaps of what and why, when we don’t know all the facts.

But then we go through the same scenario, but with additional information about why the student didn’t show up. In this case the students are asked to revisit their thoughts and emotions, and the conversation takes a completely different turn. They begin to understand the power and fallacy of believing all of our thoughts, and the toll it takes on our emotions.

Month three is a series of lessons about emotions, as another way we are taken out of the present.

Many can relate to the tendency to be overwhelmed by strong emotions. Students can relate to physically being in a game, but mentally taking themselves out of the game by getting too caught in disappointment, frustration, or anger. Others will talk about a social interaction totally taking them out for an hour, a day or maybe an entire weekend. 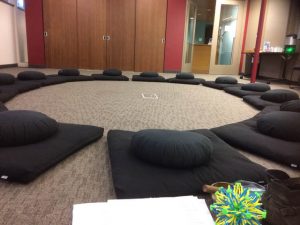 A circle of cushions, from a teen class at the UW Center for Child and Family Well-Being.

In the third month we talk about how to not let a bad email or Snapchat ruin a weekend! In delving into emotions we talk about where the sensations of different emotions live in students’ bodies (everyone’s emotional body map is unique), and how they can be with the sensation without going up into their head and creating more of a story.

Recent student Matt called this “to not keep throwing logs on the already blazing fire!”

We often end the session with the practice of saying, “And right now (name the emotion) feels like this,” as a way of learning to be the observer of an emotion and not caught in the emotion.

Moving toward positive healing and action, the classes then move from talking about what takes us out of presence to what helps bring us back into presence. This includes students learning to ground in their senses, as well as bringing in gratitude and being compassionate not only to others but also to themselves.

While implementation has had to work through hurdles, a culture shift is developing at Roosevelt as students enter the second year of the curriculum.

During a meeting with student body leaders in early November, 2016, reactions were quite mixed.

On the positive side, one student talked about making different choices. Instead of reacting to a friend’s comment, this student realized what was happening inside herself and decided to sleep on it. The result, the young woman said, was “Letting my better self shine through the next day.”

But another student said, with clear disdain about the program, “Doesn’t our school and society want us to get straight A’s, get into a good college and be successful? How does this help any of that!?!”

“I think this is learning about ourselves, but also learning how we relate better to other people,” Gabe said. “All of my opportunities have come through the human connection.”

These were wise words from a 17-year-old. The grip in my stomach from the earlier comment changed to a swelling of my heart. This program is making an impact!

Each class ends with a short, guided sit. There are wiggles, shuffling, and then slowly a settling in the classroom. What felt hard for some at the beginning of the year is now becoming a welcome part of the day.

It’s a time to stop, to take a few breaths, to let the chatter in their minds slow down. It’s a time to let hot emotions settle, and begin to feel a moment of ease. The bell rings and off they go to their next class.

7
SHARES
Share
Posted Under: 2017, Dharma Education, Winter
About the Author: Ann Hollar
Ann Hollar is a mindfulness instructor in Seattle. She received her master’s degree from the University of Washington, with her thesis entitled: “Mindfulness in Education: The Secular Intersection of Buddhism and Neuroscience.” Hollar has completed Mindful Schools’ year-long certification program, and an MBSR-Teens certification. She has taught courses at the University of Washington, and at the pre-college level at Roosevelt, Ballard, Northwest and Seattle Academy high schools. She also has taught at middle and elementary school. Hollar keeps her personal practice alive through attending week-long retreats, daily sits and through interactions with her three teenaged boys.