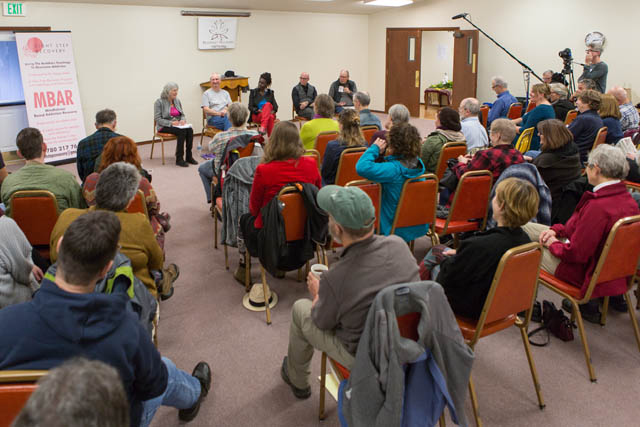 People came from around the world to hear from leaders in the Buddhist recovery movement.
Photos by: AhValo Photography, Steve Wilhelm

Leaders in the movement to use Buddhism to free people from addiction, gathered in Washington state to consider progress and to plan the future.

The Oct. 20-22 Buddhist Recovery Summit 2017, at a Christian camp near the capital city of Olympia, brought together addiction recovery leaders from around the world. 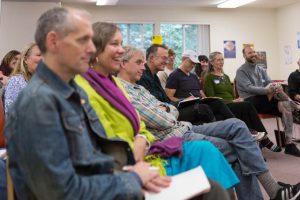 Attendees were rapt, listening to pioneers in Buddhist recovery work.

Most of them were Buddhist and many were meeting in person for the first time, often after years of collaborating online.

“It was very fruitful, primarily due to the fact that we have not had a meeting like that since 2009, since we really got the Buddhist recovery community together in a meaningful way,” said George Johns, president of the Buddhist Recovery Network board. “To be able to see each other face-to-face, eat meals together, be in roundtable discussions, universally people said it was wonderful.”

The gathering attracted most of the best-known pioneers in harnessing Buddha’s teaching to help people recover from addictions. These leaders included: 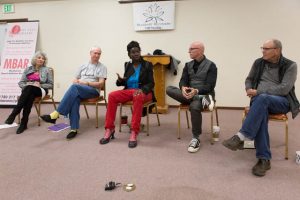 – Kevin Griffin, author of One Breath at a Time, Buddhism and the 12 Steps, as well as other books.

– Vince Cullen, a British teacher and author who leads “Hungry Ghost” retreats and teaches around the world.

“A meeting like this allows us all to come together, to see where this process stands,” said Griffin in an interview. “This is a process, and in its infancy. We don’t know where it’s going.”

The event was launched by Northwest Dharma Association, a Seattle-based organization of more than 100 Buddhist groups in the Northwest and western Canada. While the event was originally envisioned as a gathering just of Buddhist recovery leaders, it swiftly burgeoned to a much-larger gathering. 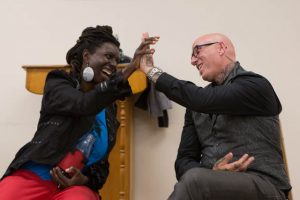 A light moment between Vimalasara and Levine.

“Definitely this event would not have happened without Northwest Dharma Association, they really were the impetus behind that,” Johns said. “NWDA is a service to the Buddhist community to help all organizations in the Northwest as well as they can. It’s a wonderful organization.”

The heart of the summit was on Oct. 21, a day-long marathon that started with a 7 a.m. silent meditation.

The day included two panels and two small group discussions, with breaks for breakfast, lunch and dinner. Outside nature responded with a drenching daylong downpour, in true Northwest tradition.

The spirit was collaborative and good-humored, even though the participants came from at least seven nations and from many Buddhist traditions and recovery approaches. Each morning featured four or five different recovery meetings, in as many rooms, so attendees could try approaches unfamiliar to them. 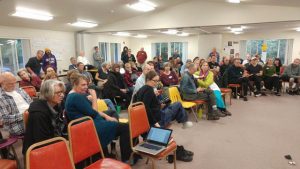 People from around the world gathered for the event, while Northwest rain poured down outside.

“What was brilliant about the summit is there were all these different variations of Buddhist recovery meetings,” said Vimalasara.

While the event featured the big names in the movement, most seemed to be downplaying their own importance.

Levine was probably the highest-profile person there, with his tattoos, his rebellious stance, and his links to his father the late Stephen Levine, also a well-known Buddhist teacher and author. But Levine also seemed to be pushing away personal attention.

“My hope is that the Buddhist recovery movement is bigger than any of its personalities,” he said. “I feel very interested in, and committed to, getting out of the way.”

The Buddhist recovery movement has been burgeoning, as opioids and other addictive substances invade communities throughout North America. 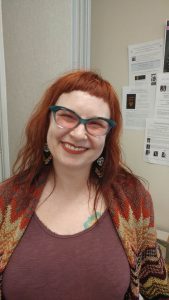 Rachael Savage, who leads a recovery group in Seattle.

The widest access to Buddhist help for addiction is the Buddhist Recovery Network, often called BRN, a massive website of meetings around the world.

Reflecting its global nature the organization is technically U. S.-based, although the website is supported by a New Zealand man, Dridhamati, who flew around the world for the summit. The intent of the network, which now makes about 250 meetings accessible, is to offer all approaches without bias, and to help people find meetings where they live.

“There is an audience out there that is looking for effective recovery techniques, and BRN is speaking to that need,” Johns said

The complex relationship between fast-growing Buddhist recovery approaches, and the 84-year-old Alcoholics Anonymous movement, was a central topic that kept emerging throughout the summit. A general secularization of U.S. society has driven many addicts away from the more Christian-based 12-step approach to coping with addiction. 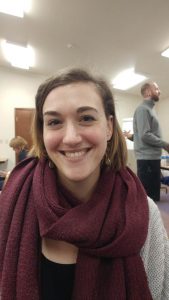 “The biggest block I encounter with people with 12 step, is the view that it’s Judeo-Christian in nature and a lot of people have had bad experiences with religion and church,” she said. “Buddhist recovery doesn’t have the same connotation for them…In my personal and professional experience, the different Buddhist recovery groups are incredibly inclusive.”

Perhaps best known is Refuge Recovery, the program created by Levine. Vimalasara calls her program Eight Step Recovery, and another is Heart of Recovery.

Many at the summit have been AA participants for years, and credited the organization with their own recovery. A repeated theme was that nobody has to choose between AA and the Buddhist groups.

“I’m so grateful for being in both of these lineages,” said Barbara West, a Shambhala practitioner and poet from Davis, California. “Sometimes the Christian level of 12-step helps me get to the Buddhist goal I’m trying to get to. People aren’t seeing it as an either-or, and let’s use all those truths available to us.”

But others said they had long struggled with the more-theistic undertones of the AA approach, and have found the Buddhist approach freeing. 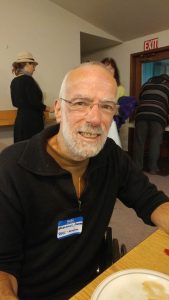 Dridhamati, who runs the website for the Buddhist Recovery Network, flew from his home in Cross Church, New Zealand, for the conference.

A particular discussion was over Buddhist understanding of not-self and emptiness, and how those are not found, or are hidden, in traditional 12-step work.

“It’s all there, but you have to dig it out,” said author Griffin. “The spiritual awakening is the awakening to not-self.”

Levine agreed that Buddhist understanding can be particularly helpful in cutting through addiction. His Refuge Recovery program also has 12 elements, but these are the four noble truths, the four foundations of mindfulness, and the four immeasurables, all core Buddhist tenets.

“Mindfulness is the core of Buddhist recovery. It is the teaching of the Buddha,” Levine said. “Everyone has the ability to end suffering, based on their own efforts, in this lifetime.”

Interestingly, Alcoholics Anonymous Co-founder Bill Wilson expressed significant support for Buddhism, in a pamphlet on spirituality he wrote in the 1940s.

“Consider the eight-part program laid down in Buddhism: Right view, right aim, right speech, right action, right living, right effort, right mindedness and right contemplation. The Buddhist philosophy, as exemplified by these eight points, could be literally adopted by AA as a substitute for or addition to the twelve steps,” he wrote in the Akron Pamphlet entitled Spiritual Milestones in Alcoholics Anonymous. “Generosity, universal love and welfare of others, rather than considerations of self, are basic to Buddhism.”

Even though Buddhist alternatives to AA are rapidly growing, the vast numbers of AA meetings globally, now more than 118,000, means that these are often the most available option for Buddhists struggling with addiction, Johns said.

While he always tells people to go to AA meetings, Johns is at the same time working hard to make accessible a growing array of Buddhist alternatives. He said he emerged from the summit re-invigorated about the importance of the work Buddhists are doing, to help people free themselves from all forms of addiction.

“At the core of the Buddhist teachings is mindfulness and the way out of suffering,” he said in a closing statement. “Buddhist recovery offers a host of teachings and practices to live a life free from the misery of addictions, and BRN is committed to nurturing and disseminating these ideas to help the still-suffering addict.”

0
SHARES
Share
Posted Under: 2017, Compassionate Action, Winter
About the Author: Steve Wilhelm
Steve Wilhelm is editor of Northwest Dharma News. He wrote a different version of this story, which appeared first in Tricycle online.