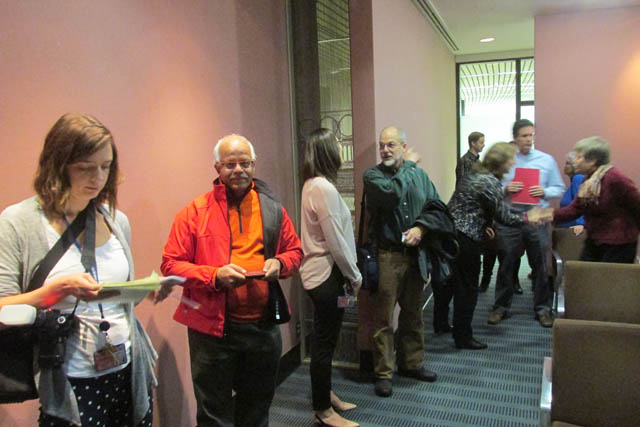 Bustling Seattle-Tacoma International Airport has for the last two years lacked for one thing – a place for inner peace – but not any longer.

On Nov. 28 officials re-opened the airport’s prayer and meditation room, which was closed in 2015. The meditation room is at the center of the Sea-Tac ticketing area, up new broad flights of stairs to the second-floor mezzanine. 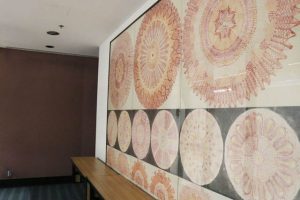 The entry to the meditation room, with graphics preserved from the early 1970s.

The re-opening was sparked by collective pressure from Northwest leaders in the Buddhist and Muslim traditions, with support from Jewish and Christian leaders. Many of those leaders, and top port executives, gathered for a Nov. 28 reception honoring the prayer room’s re-opening.

A prayer/meditation room existed at this very location from 1971 through 2015, until port staffers converted it into a meeting room to meet a need for space.

The restored room is intended to support practitioners of all religious traditions. It includes large comfortable chairs suitable for prayer or meditation, as well as ample carpeted space where Muslims, and others, can practice on the floor. The décor is devoid of any particular religious iconography, so individuals from any religious tradition, or in fact anyone needing some solitary inner time, will feel at peace. 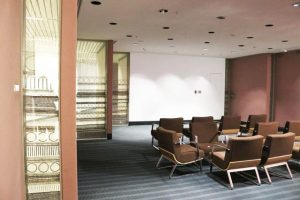 The meditation room features moveable chairs, and open space for people to use prayer rugs or cushions.

Looking ahead top port officials have expressed a commitment to the next key step: developing a successor meditation and prayer room that will be inside security, so people can use it while waiting for flights or when transferring between flights.

The most likely outcome will be that the port will develop the new meditation room as part of a four-story office tower expansion at Concourse C, said James Jennings, senior manager of aviation business development for Sea-Tac. This would give passengers immediate access to the room, which would be directly north of the central food court. 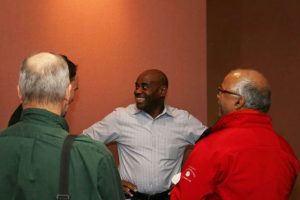 “Our intent is that as we develop that expansion, we’re looking to build in this function (the meditation room) into that expansion program,” he said.

Steve Wilhelm, a former board member of the Northwest Dharma Association and editor of this publication, initiated the building of consensus toward reopening the room. He had noticed the 2015 meditation room closure because like many Buddhists he often had used the space. He started conferring with Seattle-area religious leaders, especially people from the Muslim community, about the importance of restoring a prayer and meditation room at the airport.

Muslim, Buddhist, Christian, and Jewish leaders spoke unanimously in favor of the project. The need was particularly acute for area Muslims, who according to their tradition are expected to pray five times a day. Several female Muslims told Wilhelm how difficult it was, and how unsafe they have felt, looking around the airport terminal for a place where they could pray. 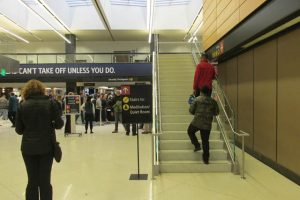 Two people mount the new stairs leading to the meditation room, from the center of the main terminal ticketing area.

Jawaid Ekram, a consultant and former Microsoft executive, spoke on behalf of the Muslim Association of Puget Sound, the largest Muslim group in the Northwest. “Steve was more of a champion,” Ekram said. “He reached out. I said, ‘Yes, it would be desirable if we could get it (the meditation room) back.’”

Rabbi David Lipper, chairman of the Washington Coalition of Rabbis and the congregational rabbi at Temple B’nai Torah, wrote in praise of the project.

“The Sea-Tac interfaith room can become a place for people of all faiths to worship in their particular faith and a place where people of different faiths, or no religious tradition at all, can share in dialogue. Our multi-faith community and our interfaith engagements contribute significantly to the rich diversity that is present in the Pacific Northwest. This room can reach the airport community with an ever-expanding mission — to provide a place of comfort, meditation, worship and aid for the traveling public and the airport community.” 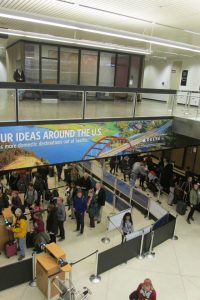 The prayer and meditation room offers a zone of peace, above the bustle of the airport.

Michael Trice, associate dean of ecumenical & interreligious dialogue at the Seattle University School of Theology and Ministry, advocated for the creation of a public space for spiritual practice shared by people of different faiths and cultures.

“If you have someone coming from another society and another culture, wherever that may be, and you want them to feel welcome, and that there’s a place of hospitality where they can feel at home, even far away from home, a place like this is important,” he said.

Trice said that having this space in an airport, a place where so many different paths cross, is particularly valuable.

The wheels started rolling in July, after Wilhelm sent a long email to port commissioners Stephanie Bowman and Courtney Gregorie, explaining the need for the meditation room. In the letter he pointed out that Sea-Tac at that point was one of the few major airports in the U.S., or around the Pacific Rim, lacking a meditation room.

Moving 46 million passengers a year, Sea-Tac is the fastest-growing major airport in the United States, with the highest per-acre passenger density.

Advocates for the room commended the Port of Seattle, which operates the airport, for its responsiveness to the initial letter. Shortly after receiving the letter the commissioners passed it off to staff, and the current plan was then put together after several meetings between port leaders and religious leaders, over the late summer and fall.

Wilhelm had high praise for the port. “It’s a really wonderful thing, and the port’s been great. They deserve a lot of credit for being responsive. It’s a collective thing,” Wilhelm said.

6
SHARES
Share
Posted Under: 2017, Compassionate Action, Winter
About the Author: Bob Baumgartner
Bob Baumgartner is service manager for a fitness company during the week. He can sometimes be found at the Seattle Meditation Center on weekends.