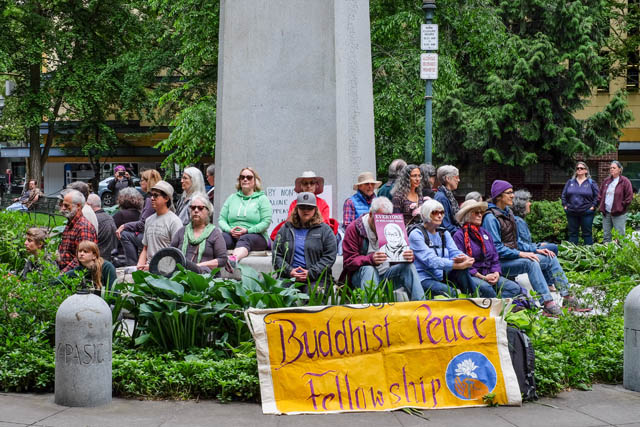 On June 4, 2017, when the alt-right group “Patriot Prayer” staged a rally in Portland, several thousand anti-fascists came out to meet them. BPFP held a sit/stand/walking meditation near the point of confrontation.
Photos by: K. Kendall, Sue St. Michael

Buddhist Peace Fellowship of Portland (BPFP) is a vehicle for Buddhist activists to take practice off the cushion and into the streets, in the name of justice.

That can mean sitting in silence during potentially violent confrontations. It can mean blockading traffic along with activists from Black Lives Matter and Don’t Shoot Portland. It can mean a die-in, a vigil for a black child murdered by police, or picketing outside a fund-raiser for the Portland Police Department. 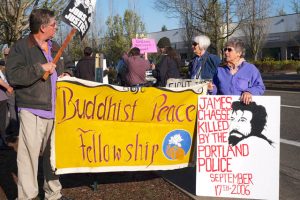 BPFP participated in a protest against further militarization of Portland Police organized by JoAnn Hardesty of the Portland NAACP.

The original 40-year-old Buddhist Peace Fellowship has chapters across the United States, and the Portland chapter is a vigorous one.

Currently one of the most popular actions is a walking meditation in support of immigrants. On the second Thursday of every month, BPFP co-sponsors a meditative walk surrounding the Immigration and Customs Enforcement (ICE) offices in Southwest Portland.

The goal is to wrap all four sides of the ICE building in a continuous stream of compassion. 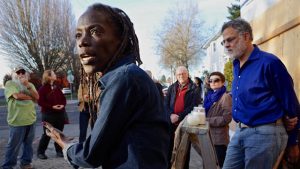 BPFP supports vigils, rallies, and actions to highlight racial profiling in policing. Meditators join JoAnn Hardesty, center, in a vigil for Keaton Otis, killed by Portland Police during a traffic stop in 2010.

“Block Harm” is a group that reaches out to other sanghas and helps expand Buddhist practice into the public sphere, as a way of expressing support for social justice. The group helps create a visible public presence for Buddhist activists.

A second work group, simply called “Be,” strengthens the spiritual underpinnings of Buddhist Peace Fellowship of Portland’s work and is currently planning a day-long retreat called “A Bigger Container: Moving Beyond the Violent/Non-violent Dichotomy.”

A third work group, “Build,” is focused on strengthening the activist Buddhist community in the Portland region. This work group is working on a web page, and is using online communications platforms Loomio and Slack to improve group communications. 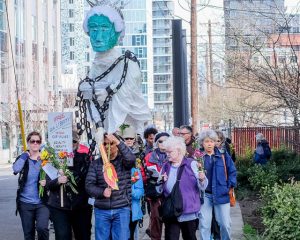 The ongoing book group is currently discussing Rebecca Solnit’s “Hope in the Dark,” and will next be talking about “Why the Dalai Lama is a Socialist,” by Terry Gibbs.

The book group began with “The New Jim Crow,” by Michelle Alexander, which clearly and meticulously documents the development of the school-to-prison pipeline for people of color. It also makes clear the ways the U.S. government has supported white supremacy throughout its history.

Other readings have included “Radical Dharma,” by Jasmine Syedullah, Lama Rod Owens, and angel Kyodo Williams; and “Between the World and Me,” by Ta-Nehisi Coates. Anyone interested in joining the book group can leave a message on the BPFP Facebook page, and the discussion leader of the book group will contact them.

This gathering includes representatives from most of the larger Portland-area sanghas. It also brings sanghas together on activist subjects, such as engaged Buddhism and Buddhist direct action. 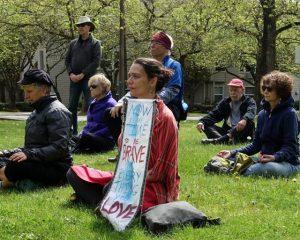 Anais Tuepker of BPFP and 350PDX sits with her sign for the Climate Meditation: “Now is the time to be brave for everything you love.”

The national Buddhist Peace Fellowship was established in 1978 in Hawaii, initially focused on disarmament and peace. Now nearly 40 years later, in groups united under the BPF logo across the United States, we still stand for peace and for justice.

The balance between our dharma practice and genuine activism isn’t easy to determine.

As we search for answers, we in Portland are inspired by teachers like Rev. Angel Kyodo Williams, Lama Rod Owens, and Bhikku Bodhi. 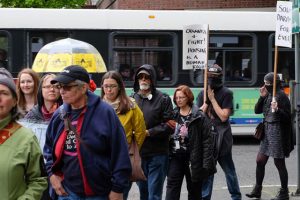 The walking meditation on May Day attracted several anti-fascist protesters.

Bhikku Bodhi, a leading Theravada monk and translator of primary Buddhist texts, also has emerged as a leading voice in Buddhist activism. He could have been speaking directly to the members of Buddhist Peace Fellowship of Portland, in a conversation he had earlier in 2017 with Bay Area teacher James Baraz.

“I would make a distinction between anger as an unwholesome state, and what I would call ‘moral outrage.’” Bhikku Bodhi said. “Moral outrage is not a mental condition where you are overcome with anger to the point where you lose self-control. But rather it’s when you witness how people with power and privilege are using their power and privilege to oppress and decimate other people, to deceive them, to promote and push through policies that are detrimental to the well-being of people.

“One uses that as a way to arouse what I call a ‘strong moral force of resistance and opposition in one’s mind,’ and a “strong commitment to take action in whatever way one can,’ to oppose those kinds of detrimental policies. 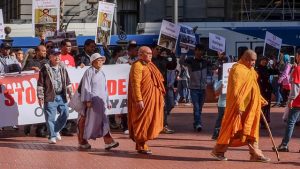 “I coined an expression for this; I call it ‘conscientious compassion.’ It’s not just compassion as an inner spiritual state or mental state, but it’s a kind of compassion that rises up and activates the sense of conscience, so one feels that it’s not enough just for me to witness this and to extend benevolent thoughts, but I must do something to prevent harm and to promote what is truly good and beneficial.”

When Bhikku Bodhi speaks of rising up and activating the sense of conscience, the members of Buddhist Peace Fellowship of Portland hear a call for Buddhists to leave the silence and safety of the meditation hall, and to join others in standing resolutely for justice.

Not all members of the organization agree with all actions the group joins. Some of the groups BPFP supports do not have a commitment to non-violence. Some use language some Buddhists feel is not right speech. Some take actions not all Buddhists are comfortable taking.

But if the intention is to work for justice and to confront the violence of white supremacy and global destruction through climate change, some members of BPFP stand beside them to bear witness and be a force for peaceful action. 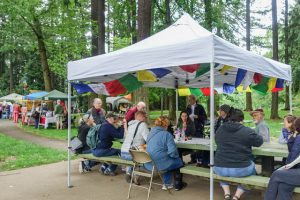 The 14th Annual Buddhist Festival in the Park featured a workshop on direct action by BPFP.

Rev. Angel Kyodo Williams, a pioneering female Zen teacher and activist woman of color based in Berkeley, California, also is one of the guiding teachers for BPFP. In a 2017 online talk she expressed the perspectives advocated by Buddhist Peace Fellowship of Portland.

“We are faced by a voracious and consumptive class of people who believe the resources of the earth are theirs for the taking. This is the same whether we are talking about the environment, the planet; or when we are talking about race…. We need to have conversations about race and we need to generate a new vision of what America will look like if it honors black, brown, Trans, female, and all bodies. As we conduct those conversations, it is important to begin from a seat of love…. Begin the core conversations with people you can love, in a bold space of willingness to touch the edges of your comfort zone.”

Buddhist Peace Fellowship of Portland is generating that new vision. As each person involved with BPFP interrogates their privilege and attends to dharma teachers who are people of color, systemic racism becomes intolerable and passivity becomes unacceptable.

Doing nothing to block harm, saying nothing, maintaining comfortable silence, is complicity.

Determined not to be complicit with white supremacy and with deeply entrenched systems that harm others, BPFP works for the liberation of all beings. The organization is engaged in core conversations about race, privilege, and systems of oppression. Those conversations lead to action in the public sphere, under a Buddhist banner.

59
SHARES
Share
Posted Under: 2017, Compassionate Action, Winter
About the Author: K. Kendall
K. Kendall is an organizer of the Buddhist Peace Fellowship of Portland. She has been a Buddhist practitioner since 1959 and has a vipassana practice. Her root teacher was Godwin Samararatne. A retired professor of theatre studies, she holds a doctorate from the University of Texas, was a Senior Fulbright Scholar, and spent six years in southern Africa leading Boal-inspired theatre for liberation.