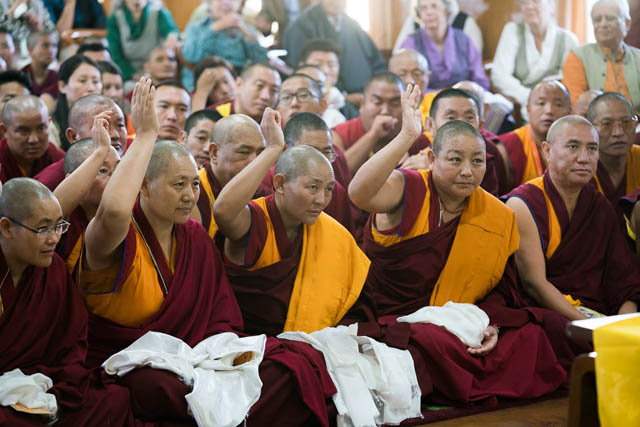 The first geshema nuns, the first to win the equivalent of doctorate degrees, identify themselves during an audience with the Dalai Lama.
Photos by Tenzin Choejor, Steve Wilhelm

The Tibetan Nuns Project board and staff, most of whom are from the Northwest and Western Canada, traveled to India to celebrate the 30th anniversary of the organization in October.

The several-day event, in the small town of Dharmasala, home of the Tibetan government in exile, attracted donors and supporters from around the world. 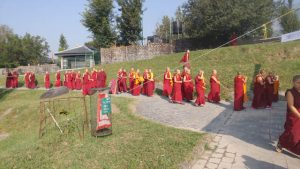 A focus of the event was the fact that a vanguard group of Tibetan nuns are achieving elite levels of scholarship and recognition equal male monks. Twenty six nuns have so far earned “Geshema degrees,” the equivalent of a doctorate in the West, a level until now reserved for monks.

The Dalai Lama said he was “very proud” of the nuns’ achievement during an audience after the ceremonies.

This series of nuns passing the grueling four-year exams is a particular triumph for Tibetan Nuns Project. The organization, with twin headquarters in Dharamsala and Seattle, has for 30 years supported and educated Tibetan nuns, most of them in seven nunneries.

From the start Tibetan Nuns Project has focused on lifting nuns’ level of scholarship to a level equal that of male monks. 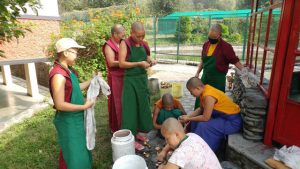 Cleaning butter lamps before the ceremonies.

The Dalai Lama linked his remarks to Tibetan Nuns Project because of the pivotal role the organization has played in supporting and training the nuns, many of them refugees from Chinese-occupied Tibet.

Tibetan Nuns Project was founded in 1987 after monastics started flooding across the border into India, many of them traumatized by repression in Tibet by the Chinese government.

While refugee monks were absorbed into existing monastic institutions in India and Nepal, most of the nuns had nowhere to go.

“We got busy in seeing what we can do for the nuns,” remembers Rinchen Khando Choegyal, director of Tibetan Nuns Project, and sister-in-law of the Dalai Lama. “We didn’t know where to start.” 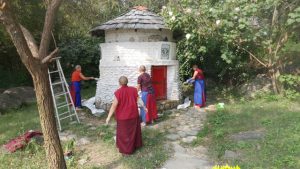 Nuns paint the tsa tsa shed, which houses small statues of the Buddha, before the ceremony.

Over 30 years the organization has built a deep funding network that has made the nuns’ education possible. This operates out of the Seattle office, which is on the edge of the International District on the south edge of downtown.

In the Seattle office a small staff manages donations and nun sponsorships from donors from around the United States, Canada, Europe and other places.

Most of the funding to support the work comes from people in North America and Europe sponsoring individual nuns, and from the willingness of major donors to fund major projects. 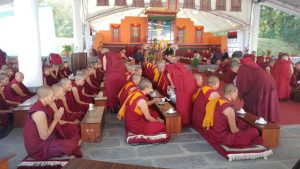 Nuns at the TNP 30th anniversary ceremony, waiting for speeches to start.

It was the pivotal role of Tibetan Nuns Project in the first geshema degrees that attracted the Tibetan government’s highest official, Prime Minister Lobsang Sangay, to the daylong 30th anniversary celebration on Oct. 2. That celebration, in the large debate courtyard behind TNP’s largest nunnery Dolma Ling, attracted hundreds of local and foreign supporters.

In his remarks Sangay said he considers himself “lucky and honored” that the anniversary, and the increasing number of geshema degrees, are happening during his administration. He cited the organization’s “small beginnings,” adding that the anniversary “is a major achievement, it is historic.” 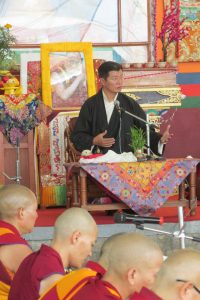 Lobsang Sangay, the equivalent of prime minister for the Tibetan government in exile, addresses the crowd.

“You all wanted to empower women, to have nuns on an equal footing with monks,” he said. “You all through determination worked very hard and made it possible.”

He said he is proud of the “very high quality” of the geshemas’ training, adding that he expects them to have an important role in training others in Buddhist understanding.

“This is part of Tibetan women’s empowerment, and we are in the forefront of the advancement of women in Tibetan society,” he said.

While male monks still do most of the training at nunneries supported by Tibetan Nuns Project, that is beginning to change as the first geshemas move into teaching roles.

At Genden Choeling Nunnery, which after 47 years is one of the oldest nunneries in the region, one geshema is now teaching philosophy to other nuns, said Rhuntsok Tsultrim, abbot of the nunnery.

Genden Choeling Nunnery, perched on the precipitous eastern edge of the mountain village of McLeod Ganj, is home to 190 nuns. So far four geshemas have graduated from Ganden Choeling.

“Without your kind support this is not possible for them, so we are deeply thankful,” said Tsultrim, addressing Tibetan Nuns Project board members during a visit linked to the 30th anniversary celebration. 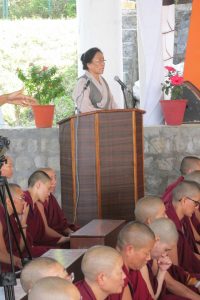 While geshema degrees are specific to the Gelugpa school of Tibetan Buddhism, the newest of the four schools, nuns’ pursuit of the highest degrees is extending also to the Nyingma and Kagyu schools.

The locus of the higher training efforts is Dolma Ling nunnery, the largest of the Tibetan Nuns Project nunneries. Dolma Ling, not far from His Holiness’ offices, is a non-sectarian institution providing training to 240 resident nuns.

Dolma Ling is outfitted with an extensive debate courtyard, where nuns vigorously practice the art of debate, a key part of higher-level training in these traditions. The debates are characterized by ritualistic and very vigorous bodily movements, as a standing monastic challenges the understanding of another who is sitting, usually on the ground.

Until the 1990s women were excluded from this form of debate. But now about 400 nuns from seven or so nunneries attend the annual Jang Gonchoe debates, the finals for the most accomplished.

This year the Jang Gonchoe debates were at Dolma Ling, and immediately after the 30th anniversary celebration the nuns could be heard debating long into the night.

This October a group of recently graduated geshemas took another step into higher training, becoming the first Tibetan nuns to embark on a systematic program of tantric studies. 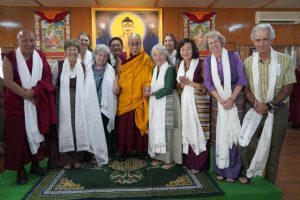 The Tibetan Nuns Project board and staff, many of them from Western Washington and British Columbia, traveled to India for the ceremonies.

This arena of studies, also until now reserved for monks, was opened to the nuns by His Holiness the Dalai Lama. The first 2016 geshemas approached him with their request to be given the teachings, and His Holiness issued detailed instructions about how this could best be done.

That training will also be done at Dolma Ling, which is best outfitted for intensive study.

“This shows that if you really study and strive,” said the Dalai Lama at the Oct. 4 audience. “You can reach the highest level of Buddhist scholarship.”

0
SHARES
Share
Posted Under: 2017, Sangha News, Winter
About the Author: Steve Wilhelm
Steve Wilhelm is editor of Northwest Dharma News, and also serves on the board of the Tibetan Nuns project. An earlier version of this story ran in Tricycle Magazine.