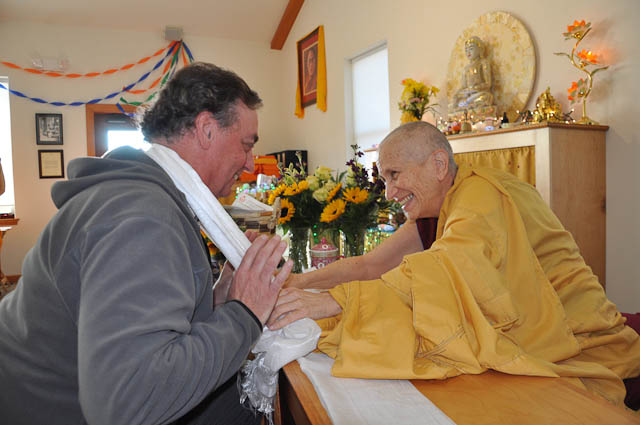 Students of Ven. Thubten Chodron—a Buddhist nun for 40 years and founder of Sravasti Abbey monastery in Newport, Washington—this year demonstrated their gratitude and admiration for their teacher in two ways.

The students gave Ven. Chodron a 40th-anniversary celebration on Oct. 28, and they replaced her tiny writing cabin with a proper two-room house with running water. The new residence—Prajna (Wisdom) Cottage—will be completed in early winter. 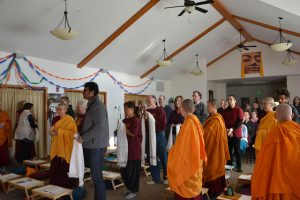 Students of Venerable Thubten Chodron line up to present her with ceremonial blessing scarves for her anniversary celebration.

Montana, Idaho, and California on Oct. 28, to honor her accomplishments and her dedication to the dharma.

They came with stories, songs and poems to express their gratitude and admiration. Many who could not attend sent stories and offerings of practice and prayers, and many committed to accomplishing a Buddhist practice of their choice for 40 days; one day for each year of Ven. Chodron’s ordained life.

Even the abbey trees seemed to be in celebratory mood, as they displayed their vivid fall colors. 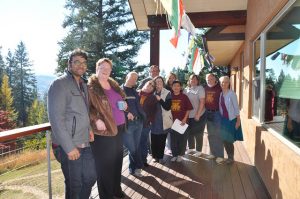 Coeur D’Alene dharma friends pose before performing a skit at the celebration.

One Zen Buddhist priest sent a story about how Ven. Chodron helped her overcome fear of volunteering at a prison. A student wrote about how a retreat led by Ven. Chodron became a path “out of hell and into freedom.” Another student mentioned how Ven. Chodron’s teachings on the four establishments of mindfulness “opened a gateway to many other teachings that have deepened my meditation.”

It was clear from the stories sent in and those told in person, that Ven. Chodron’s impact on her students has been deep and profound.

A former inmate at a correctional facility spoke of how his life changed after meeting her. A schoolteacher spoke about his admiration for her work and teaching style. A young man new to Buddhism expressed his gratitude for her teachings on overcoming anger and violence.

The celebration concluded by dedicating the merit with the songs “She Carries Me” and “Star Spangled Compassion.” 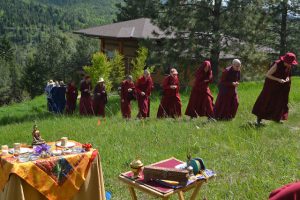 In May the Sravasti Abbey community circumambulated the future site of Prajna Cottage in a ceremonial procession.

Ven. Chodron said the celebration wasn’t about her, but was a celebration of the benefits of monastic life. She also said that anything she knows and has been able to do to benefit others and the Buddhadharma, is due to the kindness of her teachers.

A new and supportive place for Chodron to live and write

During the first 14 years of Sravasti Abbey’s development, Ven. Chodron has lived and worked in a tiny 319-square-foot writing studio, with no running water.

In that space she has written and edited many books, including her most recent collaboration with His Holiness the Dalai Lama entitled “Approaching the Buddhist Path,” published by Wisdom Publications. 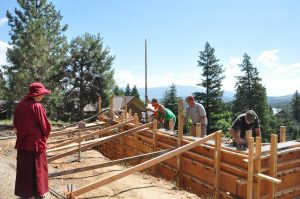 Ven. Chodron resisted previous attempts to build her a new residence, insisting that housing for monastics and guests be built first to accommodate the needs of the growing number of Sravasti Abbey residents and lay students.

But last year, with the help of a poignant and hilarious in-house video, the abbey community insisted on the need for a new abbess residence. Ven. Chodron finally relented and plans for construction of Prajna Cottage began.

In keeping with Ven. Chodron’s values of simplicity and environmental stewardship, Prajna Cottage is being built following green building principles. It’s the first abbey building to incorporate solar panels and the second to use Faswall®, which are energy-saving, wood chip-cement blocks made from recycled pallets.

Prajna Cottage is a small two-story dwelling with each floor approximately 600 square feet. Ven. Chodron will live upstairs in one large room with work and living space. Downstairs is a room for an attendant as well as storage space. 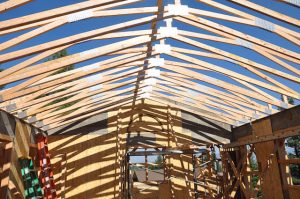 Ven. Chodron’s new home will hopefully be finished in January and she will be able to move in early 2018. Built to last, Prajna Cottage will also house future abbesses and abbots.

Born in Chicago in 1950, Ven. Chodron grew up near Los Angeles. She graduated from UCLA and did graduate work in education.

In 1975, while working as a school teacher in Los Angeles, she met her first Buddhist teachers: Lama Yeshe and Kyabje Zopa Rinpoche. Two years later she left her marriage and career and moved to India, where she received sramanerika (novice) ordination. She received bhikshuni (full) ordination in Taiwan in 1986. 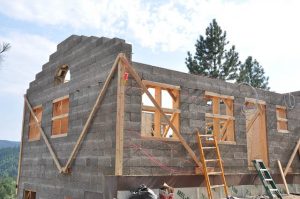 Guided by teachers including His Holiness the Dalai Lama, Tsenzhap Serkong Rinpoche, Kyabje Zopa Rinpoche and other Tibetan masters, Ven. Chodron studied for many years in India, Nepal and Europe. She became resident teacher at Amitabha Buddhist Center in Singapore, and now teaches internationally.

During a 10-year tenure as resident teacher at Dharma Friendship Foundation in Seattle, she developed strong Northwest ties. These were renewed in 2003 when she founded Sravasti Abbey, north of Spokane.

Ven. Chodron is a prolific author having written 17 books— including co-authoring two with His Holiness the 14th Dalai Lama— and editing 11 others. Her website and the Sravasti Abbey website offer dharma teachings freely, and the monastics have a prominent presence on YouTube as well. 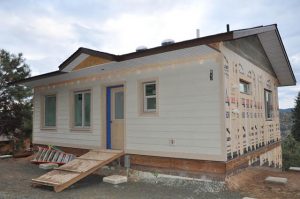 Hardiplank applied to the front exterior.

To firmly root the Buddha’s teachings in the West Ven. Chodron is committed to Vinaya (monastic discipline) practice and study, and is currently overseeing the translation of Dharmaguptaka Vinaya materials into English.

Her contributions to spreading the dharma have not gone unnoticed. In 2002 Ven. Chodron received the Outstanding Women in Buddhism Award, and in 2016 the Global Bhikkhuni Award. When she is not teaching or writing she enjoys working in the abbey’s forest, thinning trees and clearing dead brush to prevent fires. Read her biography here.

Creating the bounty of Sravasti Abbey

Set atop a hill with beautiful meadows, expansive views and a pond, Sravasti Abbey is home to a thriving monastic community where lay guests are welcome as well. Ven. Chodron founded the abbey in 2003, and it has become the center of her vision to create a space for training monastics in the West, to preserve the pure Buddha’s teachings, and to contribute to the education and practice of lay students.

Since its inception the abbey has grown to house 14 nuns and one monk, as well as trainees, visitors and four cats. To meet the needs of the Abbey’s ordained community, Ven. Chodron has put in place a robust monastic education program combining scriptural knowledge and meditation practice.

Guest teachers, lay and monastic, add to the breadth and depth of instruction. Weekly classes on thought training, philosophical tenets, monastic life, and the stages of the path to awakening, provide abbey monastics plenty of opportunities to sharpen their minds.

As a fully functioning monastery the abbey also provides for the spiritual needs of lay students. Last year the abbey welcomed more than 1,000 guest visits, and reached out to many more people via a strong online presence.

Its YouTube video channel drew close to half a million views in 2016, with 492 teaching videos uploaded in that year alone. In addition nearly 200 students participated in the distance-learning program known as Sravasti Abbey Friends Education (SAFE). Abbey monastics are also actively engaged in prison outreach.

As Buddhist students we aspire to cultivate respect and appreciation for our teachers who give us the medicine of the dharma. By allowing us to practice these important qualities, Venerable Thubten Chodron has given us a gift we will carry to future lives. May she have a long life and may all her dharma activities flourish.

0
SHARES
Share
Posted Under: 2017, Sangha News, Winter
About the Author: Ven. Thubten Nyima
Ven. Thubten Nyima was born in Colombia and has lived in the United States for over 35 years. She took refuge with Ven. Chodron in 2009, moved to Sravasti Abbey in 2016, and received shiksamana (intermediate) ordination in 2017.