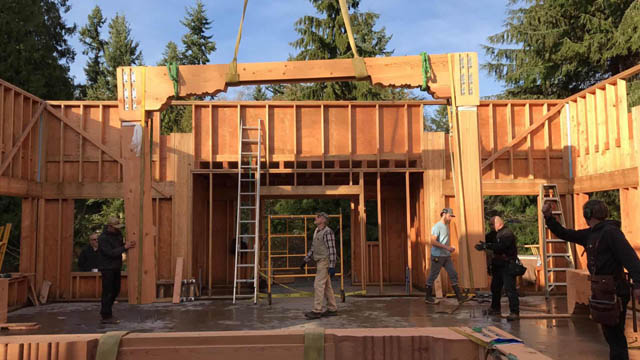 The new temple, which will incorporate many traditional Tibetan design elements, is being built near the town of Clinton on Whidbey Island, northwest of Seattle. We hope to complete the facility in 2019, and you can track progress through this site. 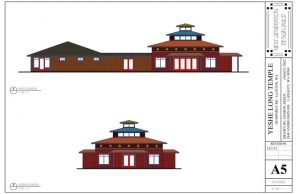 An artist’s rendition of the completed temple complex.

Dza Kilung Rinpoche, a lineage holder of the Longchen Nyingtik tradition of the Nyingma school, has for many years taught students from modular buildings on the property. The new temple project was made possible by one of Rinpoche’s devoted students and her spouse, who in 2012 generously offered to build this temple as a philanthropic gift.

Breaking ground took some time because it was a complicated process to get the permits from Island County to build a public, spiritual facility. Rinpoche has said that when an undertaking like this is launched obstacles often manifest in direct proportion to the magnitude of the project, possibly to test the purity of the aspiration.

With support from the architect and builder, Rinpoche is integrating classic elements of a traditional Tibetan temple with local Northwest style. The facility will cover approximately 5,000 square feet, with the actual temple space about 2,000 square feet. The remainder of the facility will include the lama’s quarters, a gallery, dining hall, and full commercial kitchen, as well as an office, utility and storage space, and restrooms. 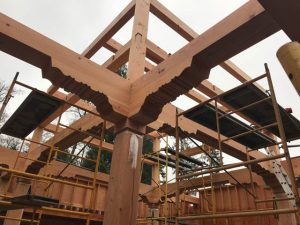 The temple frame shows the traditional Tibetan treatment of the wood structure.

The actual temple design is in the shape of a mandala, including many traditional Tibetan architectural elements. A significant feature of the temple will be the timber framing and support structures. When these posts and beams are completed, they will support the main temple and its open second and third floor spaces.

These three levels will represent the trikaya, or the three kayas, which are three levels of reality in the Nyingma school of Tibetan Buddhism. The nirmanakaya, first floor, is appearance of enlightened mind in a physical body; samboghaya, second floor, is the appearance of enlightened mind in immaterial manifestations such as meditational deities; and the dharmakaya, third floor, is the ultimate nature of mind.

The timber framing is currently being prepared in Canada. Rinpoche will conduct a special blessing ceremony to honor these important and traditional Tibetan beams and posts, as they are one of the most sacred aspects of the temple structure. They will literally anchor the temple to the earth, and will hold it up into the sky. 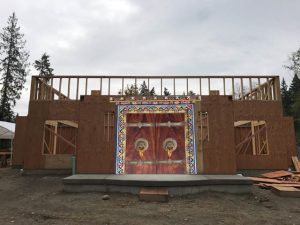 An artist’s rendition of how the main entrance will look.

When the initial offer to build a temple arose in 2012, we needed to raise funds to purchase an adjoining piece of land, to make enough space to complete the project. Simultaneously planning for the actual building was underway.

All during this time Rinpoche has given great consideration to the land and elements around the site, which he has dubbed Yeshe Long, and around the new temple. He has prepared the environment through Tibetan ceremonies consecrating the land, with his wishes for peaceful and harmonious energy for this sacred space.

For instance on a hot day in June, after we received building permits, Rinpoche led the sangha in a very traditional ceremony of preparing the land.

To do this we buried treasure vases 4 feet deep in the ground at the proposed center of the temple, and at the four directions of east, south, west, and north. Together these five represent the five wisdoms. 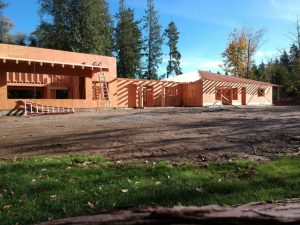 The temple from the side, with most of the plywood up.

Under Rinpoche’s direction students used shovels and crowbars to break through the hardpan soil and rocks for the burial pits. We laughed, sang and sighed as we dug.

Meanwhile others prepared piles of cedar boughs, flower petals, and gravel. These, along with prayers, mantras, aspirations, good intentions and good wishes for all sentient beings, were to be added when the treasure vases were lowered into the sacred earth.

The treasure vases were filled during a day-long ceremony, with prayers collected over time from many of Rinpoche’s students throughout the world. While people gathered precious herbs and substances, others were carefully rolling the written prayers as we chanted mantras and  prayers over them.

When all was ready we wrapped the treasure vases in brown paper sacks with the flowers, cedar and gravel, while continuing with more mantras and prayers. We recited prayers in the center and in each direction as we filled the holes. We finally placed rose petals and stones to mark the five spots, and were happy to announce that construction could finally begin! 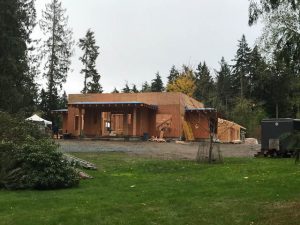 The front entrance, across the green lawn.

The temple is an affirmation of Rinpoche’s choice of Whidbey Island as his dharma home in the West, and a manifestation of his students’ appreciation for the gift of the dharma they have received from him. Students collectively feel deeply appreciative of the ways Rinpoche has deepened and informed our understanding of the dharma, and how it translates into our daily lives.

It is our aspiration as his students that the manifestation of this temple reflect our devotion to our precious teacher and the teachings, and that it benefit all sentient beings.

As some of the readers may remember, there have been previous articles in the Northwest Dharma News regarding the arrival of Kilung Rinpoche to the Seattle area, and his heartfelt, humanitarian work for his people of the Dzachuka Valley in Tibet.

For the last 18 years the non-profit Kilung Foundation, under Rinpoche’s direction and leadership, have accomplished such projects as building a bridge across the Dzachuka River to ensure the safe crossing of the nomadic people and their animals on their way to their summer pastures, and initiating a yak dairy co-operative designed to strengthen community economic development while preserving this ancient lifestyle. 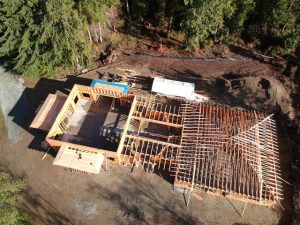 An aerial view showing the expansive size of the great hall, and the proximity of the surrounding forest.

Most recently Rinpoche has been devoted to re-establishing the shedra (monastic college) nine-year program of monastic studies, following a devastating fire in April of 2016.

Simultaneously Kilung Rinpoche has been developing his understanding of our Western minds and lifestyle, to develop best ways to teach and help his students in the West as well as in Thailand, Taiwan, and China. The newest example of that is his “Relaxed Mind” book and meditation course.

It is with deep appreciation for the manifestation of this sacred temple, that Rinpoche shares his profound wishes and aspirations. His hope is that this sacred place carry the essence of heart open energy that is the essence of bodhicitta, and that this energy spreads out to benefit all beings everywhere.

15
SHARES
Share
Posted Under: 2017, Sangha News, Winter
About the Author: Jeanne Lepisto & Mully Mullally
Jeanne Lepisto is director of Pema Kilaya and Kilung Foundation, and is Kilung Rinpoche’s personal assistant. Mully Mullally is a board advisor.