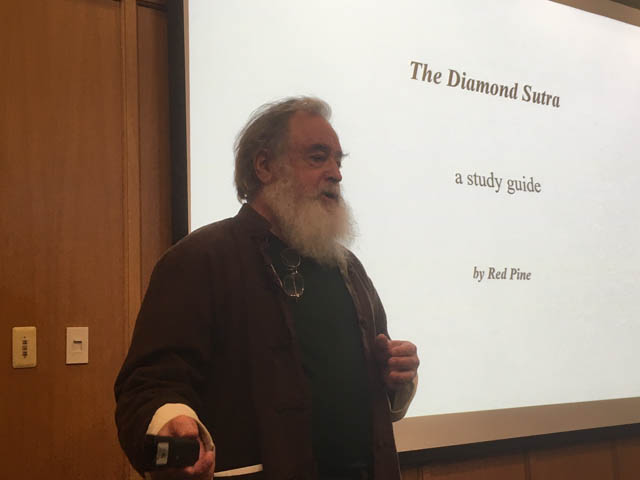 The event was sponsored by the Seattle University EcoSangha.

It was a special treat hearing Red Pine revisit his topic for the evening — The Diamond Sutra (Counterpoint, 2001) — which he had originally translated almost two decades prior. 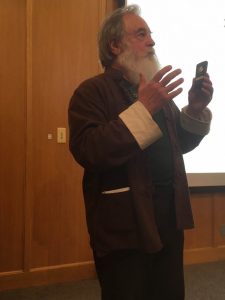 Through his translating Red Pine has explored these indispensable texts rigorously, as a part of his own practice. Drawing on this wealth of study, practice and experience, Red Pine walked the audience through the first 20 paragraphs, carefully elucidating the argumentative techniques and spiritual strategies of the text.

Of course, as he readily admitted, it’s impossible to condense all this erudition and spiritual wealth into a single talk, so he also prepared a small (and quite handsome) study manual which he distributed to each audience member. The talk was designed to jump start each person’s own study of the Diamond Sutra, by providing some of the philosophical, philological and spiritual context.

Of special interest was the contrast between the Sanskrit original and the Chinese translation (first undertaken by Kumarajiva at the outset of the 5th century). The original version’s concern with the tripartite body of the Buddha (Nirmanakaya, Sambhogakaya, and Dharmakaya) disappears altogether in the Chinese version.

Porter has translated many great texts. These include:

– Classical Chinese poetry (Cold Mountain, Poems of the Masters: China’s Classic Anthology of T’ang and Sung Dynasty Verse, In Such Hard Times: The Poetry of Wei Ying-wu, and the Mountain Poems of Stonehouse). 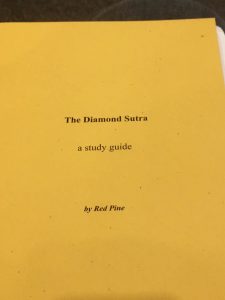 He has also written several important works of non-fiction under his own name, including “Road to Heaven: Encounters with Chinese Hermits,” “Zen Baggage: A Pilgrimage to China,” and the recent “Finding Them Gone: Visiting China’s Poets of the Past.”

This impressive bibliography makes Red Pine a treasure to any lover of East Asian culture. It is in particular his masterful translations of some of the major Mahayana sutras that have endeared him to many Buddhist practitioners in the Pacific Northwest and beyond.

In general many scholars’ sutra translations, even while academically rigorous and reputable, provide inadequate historical context and appear without context. But this is counter to the East Asian tradition of always studying a sutra along with its commentaries, many of them written and appended over many centuries. 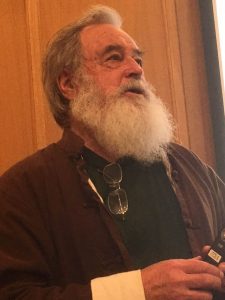 A man who lives his subject matter.

Red Pine’s four sutra translations included translations of copious historical commentaries as well as his own commentary, allowing the works to be accessed in a more classical—and indeed helpful—manner.

Such technicalities might give the false impression that the evening was dry and technical. The opposite was the case. Red Pine was on top of his game, interacting freely and often with the audience as everyone collectively explored one of the great documents of the negotiation of the Buddha Way.

By the end of the evening, it was abundantly clear why Bill Porter/Red Pine is one of the great dharma treasures of the Pacific Northwest.