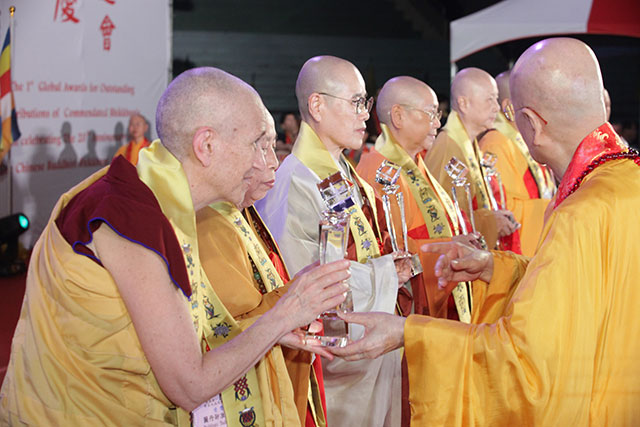 Venerable Thubten Chodron— a Buddhist nun, author, teacher, and founder of Sravasti Abbey in Newport, Washington— in November was given the Global Bhikkhuni Award. 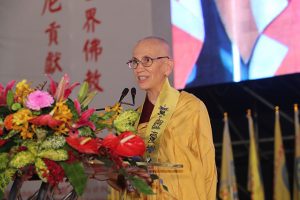 The award, one of 50 presented to leading nuns by the Chinese Buddhist Bhikkhuni Association of Taiwan, was given during six days of ceremonies Nov. 17 through 23. The ceremonies were conducted in Kaohsiung City, Taiwan. 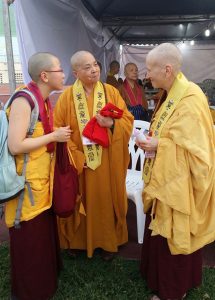 Nuns from 12 countries received the award. Venerable Thubten Chodron joined American Buddhist author and teacher Venerable Pema Chodron as the only two nuns  from the Tibetan tradition. In total, six North American nuns were honored this year, including four Theravada nuns who now reside in the U.S.

In selecting Bhikkhuni Thubten Chodron, the association wrote: “Venerable Bhikkhuni Thubten Chodron, you are being honored for preserving, protecting, and promoting Tibetan Buddhism by establishing and being the abbess of Sravasti Abbey in Washington, USA, and for offering teachings, both oral and written, which reach the hearts and are widely received by the American people.”

In an email response to a question, Ven. Chodron looked at the award broadly.

“The award doesn’t mean a lot to me on a personal level; I do what I do because I think it benefits sentient beings and the dharma, no matter whether people praise or criticize me,” she wrote. “However, the award is significant and meaningful in that now people are recognizing the contribution that women in general, and bhikshunis specifically, make to the dharma and the welfare of beings.” 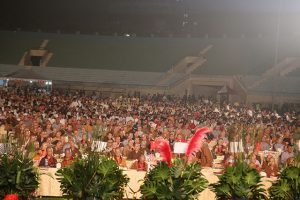 An estimated 15,000 people attended the Global Bhikkhuni Award ceremony, in a Kaohsiung stadium.

The award ceremonies received much attention in Taiwan, with an estimated 15,000 people attending the ceremony in an outdoor stadium.

The president of the World Chinese Buddhist Sangha Congress, Venerable Master Ching Liang, helped to present the awards. Now 90, he praised the efforts of Taiwanese nuns.

“Bhikkhunis make up two-thirds of the monastic community in Taiwan, and they have made important contributions,” he said. “Buddhism in Taiwan has been able to shine outside of the island due to the bhikkhunis who sacrificed themselves no matter what role or duty they were assigned.”

Ven. Thubten Chodron, in a talk she gave at the ceremony, pointed out that her ordination lineage comes from Chinese Buddhism, even though she practices Tibetan Buddhism. With the blessing of His Holiness the Dalai Lama, Venerable Chodron went to Taiwan in 1986 to take full ordination in the Dharmaguptaka lineage that flourished in China, Korea, and Vietnam. 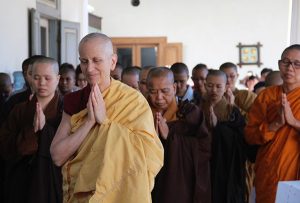 “The bhikshuni ordination is not available in the Tibetan tradition because the ordination lineage never spread to Tibet,” she said. “I am grateful to Chinese Buddhists for sharing this precious ordination with qualified Western aspirants so that we, too, can become full members of the sangha and help shoulder the responsibility of preserving the dharma and vinaya for future generations. It is with this thought that I humbly accept the award.”

She added that the award recognition, and mutual support, are important for the flourishing of the dharma.

“America is not a Buddhist country and we face unique challenges in establishing the dharma and vinaya there,” she said. “Interest in Buddhism is growing in the West, particularly because Buddhism’s analytical approach fits well with science. In addition, Buddhism emphasizes love and compassion for all beings, and the bodhicitta intention. 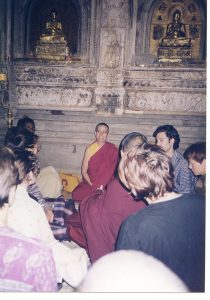 Ven. Chodron teaches under the Bodhi Tree at Bodh Gaya, India, in 1998.

“All of us here are extremely fortunate to have encountered the Buddhadharma, and must use our precious human lives to realize the meaning of the Buddha’s teachings,” she said. “To accomplish this, it is important that all of us from various traditions support each other.”

A California native, Venerable Chodron ordained as a nun in the Tibetan Buddhist tradition in 1977.  Receiving full bhikshuni ordination instilled in her a deep responsibility and commitment to uphold, preserve, and propagate Buddha’s teachings. This is the mandate the Buddha himself entrusted to his monastic disciples.

She left  DFF in 2001 to fulfill her dream of founding a monastery to train and support Western Buddhist monastics. In 2003 she established Sravasti Abbey in Newport, north of Spokane, Washington. 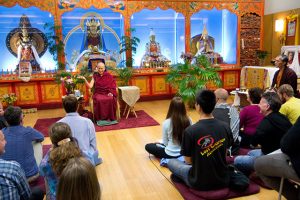 Today the abbey is home to a dozen monastics and several trainees. Its dharma programs attract more than a 1,000 visitors each year, while tens of thousands view her talks, and those of other abbey monastics, online.

The abbey has been expanding its facilities to keep pace with the growing community, including consecrating its new Chenrezig Hall in 2014.

Venerable Chodron is also a prolific author, having published 26 books on Buddhism with several more in the works. She co-authored “Buddhism: One Teacher, Many Traditions” with His Holiness the Dalai Lama, with whom she has studied for nearly 40 years. 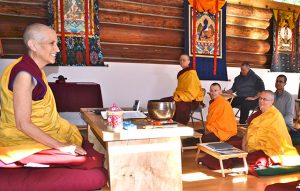 Venerable Chodron teaches in person and online from Sravasti Abbey, the Buddhist monastery she founded in 2003.

The Chinese Buddhist Bhikkhuni Association of Taiwan is a 300-member organization of accomplished Buddhist nuns. Made up of teachers and abbesses of Taiwan’s numerous monasteries, the association has been recognized by the Taiwanese government for excellence in service to society.

The association instituted the awards in honor of their 20th anniversary, and will subsequently make presentations every three years.

“We acknowledge that Buddhism is international and expanding, and women are at the forefront of that development,” said Chairperson Bhikkhuni Pu Huei. “We understand that there are bhikkhunis around the world who are working diligently in leading people to practice the Buddhadhamma, and this we want to recognize and celebrate!”

0
SHARES
Share
Posted Under: 2016, Dharma Education, Featured On Home Page, Winter
About the Author: Ven. Thubten Chonyi
Ven. Thubten Chonyi is a fully ordained nun practicing in the Tibetan tradition, who lives and trains at Sravasti Abbey in Newport, Washington.