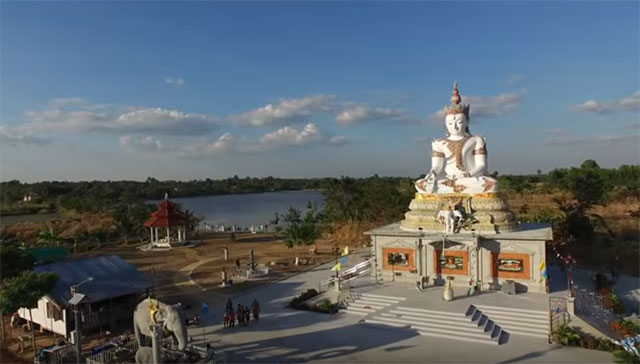 An Olympia-based Thai monk is just completing a 52-foot-high Buddha statue in Thailand, on land he was given as an inheritance. 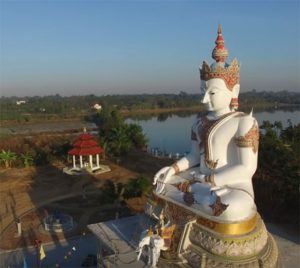 The lake behind offers a quiet place for passing pilgrims.

Phra Ratsamee, abbot of Bhuddhangkura Buddhist Temple, said the idea of building the statue came to him after his parents died in 2013.

“I thought to honor the Buddha by building a Buddha statue,” he said.” To build a statue in my home town.”

The family land overlooks a lake, so the statue is in an especially supportive setting. The serene white statue of the Buddha, the right hand in the offering blessing mudra, is accented in traditional Thai colors.

Here’s a You Tube video, filmed by a camera-carrying drone, which shows well the statue’s design and its surroundings. 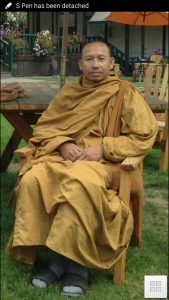 Phra Ratsamee, who had the statue built, said he considers it a “blessing.”

Construction, which took two years, was funded by U.S. donor Narumol Kaiser and by Thai people around the site, said Ven. Ratsamee.

Backers have committed to maintaining the landscaping, and the military built a road to give people access to the statue, said Ven. Ratsamee.

The site is in Bua Chet province, part of Surin Province, about 270 miles east of Bangkok near the border with Cambodia.

The statue will be consecrated at an extensive ceremony Dec. 30 and 31, at the site. Among those invited are Ven. Santidhammo, the Western monk at Wat Atamma, in Woodinville, north of Seattle.

Phra Ratsamee said the statue is “for the public.”

Phra Ratsamee has been a monk for 28 years, and first came to the United States in 1996. 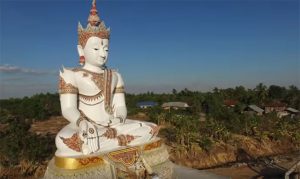 Homes overlook the site of the Buddha statue.

He is a creative person, and for instance in 2013 brought a group of monks, fresh from Thailand, to Mt. Rainier to experience snow for the first time.

After a chance encounter we ran a story on the snowy monks in Northwest Dharma News. Several of the monks were quite intrepid, despite the fact they were scaling Rainier’s snow fields in flip flop sandals.