Seattle Insight Meditation Society (SIMS) is moving to a new home! We just don’t know where yet, and that is simultaneously a little terrifying and an opportunity for dharma practice.

Our Buddhist group, which has been offering insight meditation practice for 20 years in Seattle, often attracts up to 90 people for the weekly Tuesday setting. We are looking for a space with capacity to grow, able to support a weekly schedule of activities. 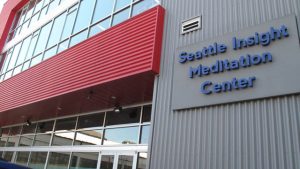 The current SIMS home is the lower level of a seafood company, in the maritime industrial area directly south of downtown Seattle.

SIMS’s lease on our current home, in the industrial zone just south of downtown Seattle, will end in June 2019 and cannot be extended. Seattle’s tight and expensive real estate market makes finding a new home an enormous challenge. Add traffic congestion bottlenecks and parking issues, and the task can seem nearly impossible.

There are not many facilities in Seattle that can be transformed into a meditation center, with reasonable access for sangha members coming from all directions. So we’re asking for your help.

To facilitate the search for a new home SIMS has assembled two teams: one to understand what we need in a building, and the other to search for properties. Sangha members were invited to several meetings during early 2017, asking what they needed and desired in a new facility.

Much of the discussion has been around which activities are most important now and in the future. Sangha members enthusiastically support sittings, dharma talks, walking meditation, kalyana mitta (spiritual friend in the Pali language of early Buddhism) group meetings, and community potluck meals. 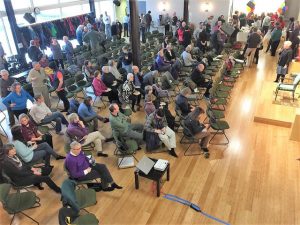 The gathering for Rodney Smith’s 70th birthday and retirement party, in January, 2017.

From these meetings we’ve also realized how important it is to find a space centrally located in Seattle, zoned for religious institutions, with access to public transit and parking. Other features like ADA access, kitchen facilities, and bathroom size are among the criteria, which may require the vision of an architect to achieve in an older building. Fortunately the selection team includes SIMS members with backgrounds in these areas.

Tapping into sangha members’ time, energy and support has been at the heart of the organization since its beginning.

The current space, made available in 2013 by very generous sangha members, is an example of such support. The industrial zone where it’s located, on the ground floor of an office building, is called the “SODO” area by Seattleites.

The SODO space has worked out very well and has given us a good baseline for what to look for in a new facility. The current 3,500-square-foot space seems a bit tight sometimes, but it has good parking and access to light rail transit. It also includes essential space for a sitting/sacred area, a foyer, hot water for tea, a small kitchen and a library. 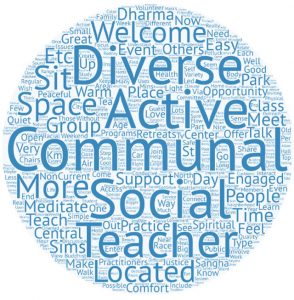 A graphic that illustrates the values the SIMS sangha plans to continue to express in a new site.

A small team started SIMS almost 20 years ago. The twin missions were to offer the Buddha’s teachings on insight and awareness to all who sought them, and to support a spiritual community centered in the Pacific Northwest.

SIMS’s founding teacher was Rodney Smith, who retired in 2016. He has been succeeded by co-guiding teachers Tim Geil and Tuere Sala.

The teachings at SIMS are based on insight meditation, also known by the Pali word vipassana. As a spiritual tradition insight meditation draws on the accumulated wisdom of the Theravada Buddhist lineage as practiced for centuries in the monasteries of Thailand, Burma and Sri Lanka, and as transmitted over the last 30 years to teachers in the West.

SIMS’s first home was in the basement of Keystone Congregational Church in the Wallingford neighborhood of Seattle, which is north of downtown. As SIMS grew it found a new home at Congregation Beth Shalom in the nearby Wedgewood neighborhood. Next SIMS moved to the basement level of St. Mark’s Episcopal Cathedral, called Bloedel Hall, in Seattle’s Capitol Hill neighborhood. We are very grateful to the houses of worship that shared their spaces with us during these years of transition.

Since moving to the SODO center in 2013, we have found the dedicated space has opened up many more opportunities for a larger variety of gatherings. 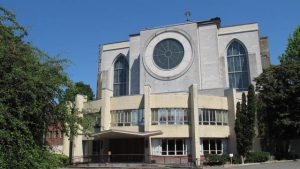 Bloedel Hall, the lower level of St. Mark’s cathedral on Capitol Hill, was for many years SIMS’ home.

Events in our SODO center range in size, depending on their focus. Small intimate sitting groups and beginning meditation classes typically serve 10-30 people, while the Tuesday evening dharma talks and sits draw 60-90 people.

Most of the sangha members attending these events come from Seattle neighborhoods. When we bring in guest teachers who appeal to the wider Buddhist community, we sometimes attract attendees from all over the Pacific Northwest and western Canada. 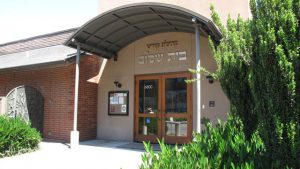 For many years before that, the sangha gathered at the social hall at Congregation Beth Shalom, in Seattle.

The search for a facility able to support all this activity continues. So far we have looked at existing churches, and commercial properties, for opportunities to buy, share or lease. We’ve toured a number of interesting buildings but nothing has come very close to fitting the sangha’s needs.

Although our deadline of June 2019 may seem like a long time from now, it is really just around the corner when you think of setting up a new facility and moving. So we are reaching out to the larger Northwest Buddhist community to enlist your help in finding us a new home. If you know of any facility that might fit SIMS we would appreciate hearing from you at board@seattleinsight.org.

0
SHARES
Share
Posted Under: 2017, Sangha News, Winter
About the Author: Peter Weertman
Peter Weertman has been practicing mediation and a member of SIMS since 2011. He is one of the leaders of the SIMS site selection committee.