During 2017 Buddhist practitioners from around the Western Washington served the needs of prison inmates in expanding ways.

These efforts touched people in many prisons across Washington state. Highlights included gathering dharma books for prison libraries, bringing distinguished Buddhist teachers to prisons, including one who did prison time himself, and making possible annual Buddhafest events at several prisons. 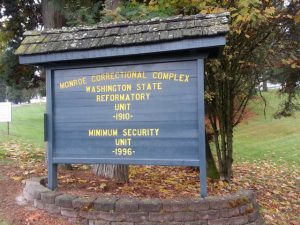 The Monroe Correctional Complex sign, at the entrance of Washington State Reformatory (WSR) and the Minimum Security Unit (MSU).

Holding up a piece of paper, a facilitator invited members of a prison Buddhist meditation group to look deeply to see the non-paper elements: the rain, the clouds, the sun, the earth, the logger and his parents. Many things are needed for the paper to manifest.

“You are blowing my mind,” said one prisoner, an inmate at Twin Rivers Unit, part of the Monroe Correctional Complex, also called MCC. 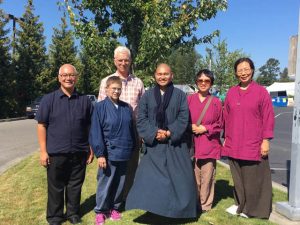 The men inside these walls really respond to the clarity and accessibility of Thich Nhat Hanh’s teachings on what he calls “interbeing.” But Thich Nhat Hanh’s books and many other Buddhist classics are not readily available to prison inmates. The MCC prison library is understocked, and inmates and Buddhist volunteers are seeking community support to expand the dharma book collection for inmates.

In particular they’re seeking donations of used dharma books to help spread the dharma inside the prisons. A better-stocked library will help inmates deepen their knowledge of the dharma, and also help the men use their time inside prison well, planting wholesome seeds that will grow to have a positive impact on their future.

If you have high-quality used dharma books to donate, they would be most appreciated. Books cannot be received through the mail by the prison without proper prior authorization. Buddhist meditation program sponsor Sandra Kipper is coordinating collection of used dharma books from within the Seattle area, and is delivering the books to the Monroe Correctional Complex. 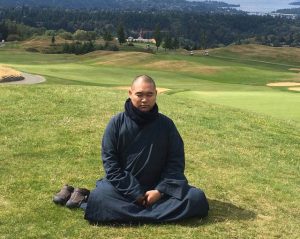 Over the course of a morning, His Eminence Garchen Rinpoche spoke to inmates about his own 20-year imprisonment in a Chinese labor camp.

This was the first time Rinpoche had been in a prison since his release in 1979. He is a revered and senior Tibetan lama in the Kagyu tradition.

Rinpoche told the inmates that understanding cause and effect can help you accept the circumstances of your life. He spoke about the importance of cultivating limitless love and compassion, and said self-clinging is the source of our negative emotions.

Rinpoche said each of us wants happiness and freedom from suffering, adding that negative states of mind disappear as we develop in love and compassion.

Rinpoche gifted each of the inmates with the booklet “The 37 Bodhisattva Practices,” and said that it contained all the important points of the dharma. He also gave each wristbands and stickers, depicting the “Liberation through Sight” mantra. 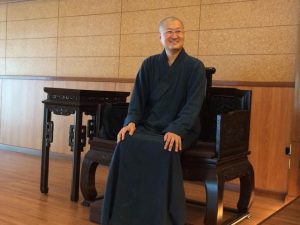 These monks have in recent years started teaching in a few prisons in Washington State, after years of traveling through California and Oregon visiting prisons and teaching the dharma. On this most recent visit, they taught Buddhist meditation practitioners at the three prison units of MCC; all in one day.

Master Huei Guang taught about the eightfold noble path, and how the mind is the foundation of action and speech. He also emphasized how important meditation is to understand the workings of one’s own mind.

In 2016, the International Bodhisattva Society made an incredibly generous gift of books to every single prison unit in Washington state. Each unit received about 25 Buddhist texts in English, including each of the units at MCC. 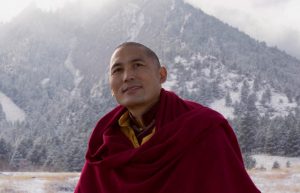 Kilung Rinpoche, who is based on Whidbey Island near Seattle, visited the Twin Rivers Unit in November.

Dza Kilung Rinpoche, whose dharma center is on Whidbey Island, also visited TRU in November. One of Kilung Rinpoche’s long-time students, Diane Berger, will be coming to TRU after Kilung Rinpoche’s visit, to teach a meditation series based on Rinpoche’s book, “The Relaxed Mind, a Seven-Step Method for Deepening Meditation Practice.”

The Buddhist meditation programs at MCC also include an annual celebration called Buddhafest. This special opportunity, for inmates to celebrate their spiritual practice with family, friends, volunteers and sangha guests, is made possible by the generosity of donors and volunteers.

The event often includes a short meditation, a food blessing and a special meal. People there share gratitude, and together create, and dissolve, a mandala made of colored rice.

During 2017 three Buddhafest events were offered to the inmates at Monroe Correctional Complex. On June 28 inmates celebrated at SOU, followed by a July 8 event at WSR, and a July 24 event at TRU.

The SOU event was attended by two sponsors and 13 inmates, who created haiku poems to commemorate the day. Buddhafest at WSR had over 100 inmate attendees, with family, friends and four volunteers joining for a special day of music, song, dance and meditation.

The Buddhafest at TRU was attended by about 25 inmates, family, friends and four volunteers. It was a joyous event as the group welcomed back long-time volunteer Genko Kathy Blackman, after a six-month absence.

Buddhafest is a very special event for the inmates and they would appreciate any community support to help them maintain this tradition. Although many inmates work inside the prison, their wages are quite low, far less than minimum wage.

Please consider making a small cash donation to support Prison Dharma and to help make Buddhafest possible for the inmates at MCC. Small donations of $5 and $ 10 make a difference, and support the Buddhist meditation practitioners’ annual celebration. Checks can be sent to: Inmate Accounts, MCC, P.O. Box 888, Monroe, WA 98272. Please indicate which unit you are supporting as follows:

For TRU, checks can be made out to: 2955 TRU Buddhist Donation Account

For WSRU, checks can be made out to: 2955 WSRU Buddhist Donation Account

For SOU, checks can be made out to: 2955 SOU Buddhist Donation Account

If you are curious about getting involved with the Prison Dharma programs at MCC, and/or have books to donate, please contact Sandra at sandrakipper@yahoo.com.

0
SHARES
Share
Posted Under: 2017, Prison Dharma, Winter
About the Author: Sandra Kipper
Sandra Kipper is a member of Drikung Seattle, a dharma center in the Drikung Kagyu tradition of Tibetan Buddhism. Drikung Seattle was founded by H.E. Garchen Rinpoche. Kipper is a volunteer sponsor facilitating Buddhist meditation programs at the Monroe Correctional Complex.