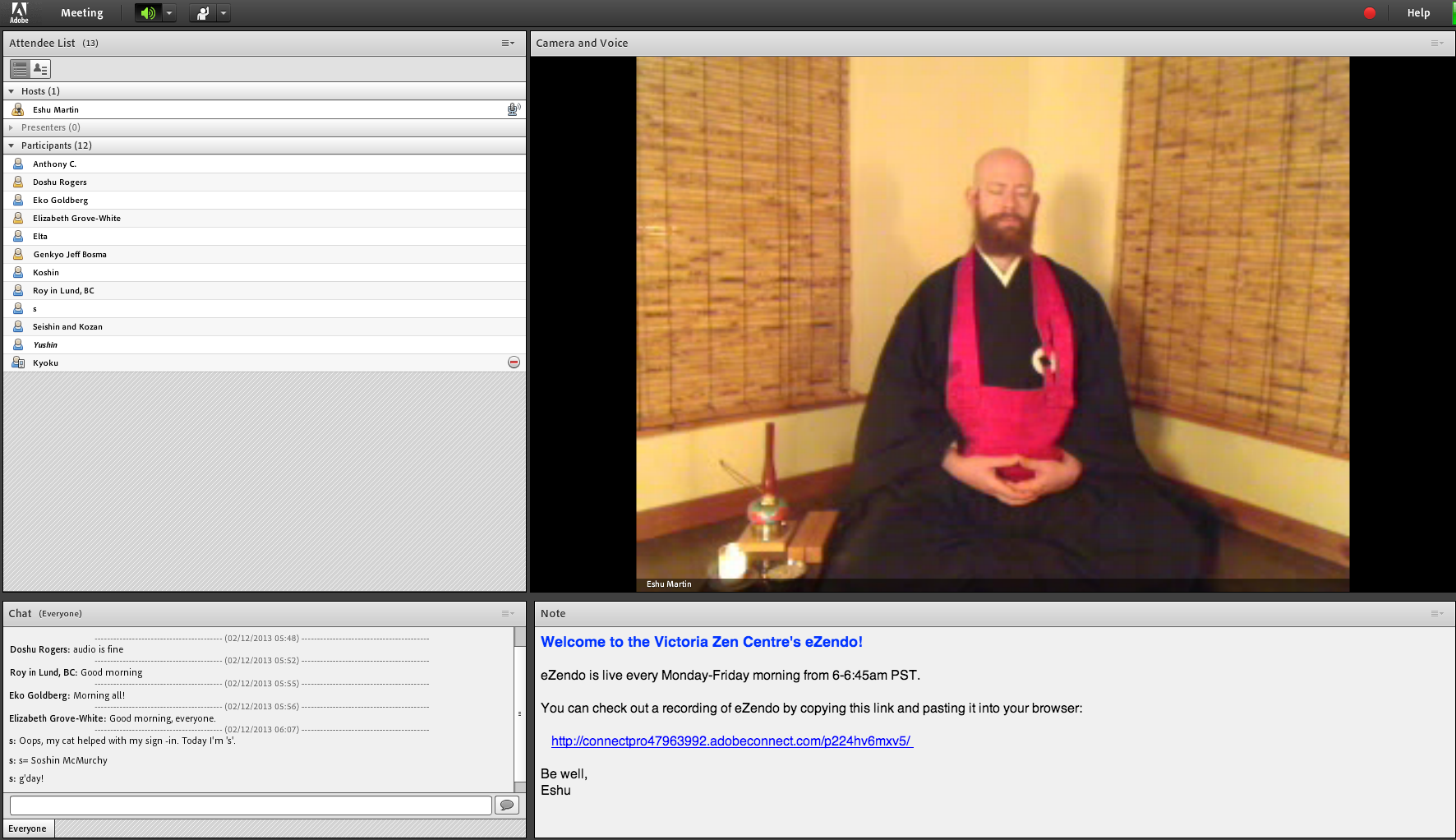 A screenshot of the eZendo with Eshu Martin sitting.

Since 2009 the Victoria Zen Centre in Victoria, B.C., has been developing quality training resources and programs to support individuals who are interested in Zen Buddhist practice and meditation, and making them available online to the public, mostly for free.

Most recently, in the fall of 2012 the center began posting video recordings of dharma talks that Eshu Martin, abbot of Victoria Zen Centre, gives each week at the “Zen Open House.” This event is held in collaboration with the University of Victoria, on the VZC YouTube channel.

“What we are finding is that different people connect more strongly with different media,” Martin said. “Some folks like audio, some video, and some text. My hope is to make genuine Zen practice accessible to as many people as we can!” 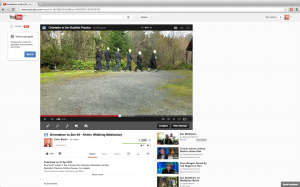 Earlier in 2012, Martin and several members of the Victoria Zen Centre began writing, filming and editing what would become the “Online Orientation to Zen” course.

An entirely web-based four-week training program, the course includes more than a dozen videos, audio files, and printable resources. Designed to transform a keen interest into a consistent and sustainable daily practice, all of these resources are made available on the center’s website, completely free of charge.

For those that would like some encouragement while working through the course, online support with a training guide via Skype is also available for a fee.

Around the world today, the teachings of Buddhism have become increasingly popular and available. Every day, more books are published, and through the efforts of teachers like H.H. Dalai Lama and Thich Nhat Hanh, many Buddhist concepts, terms, and images have become familiar throughout Western culture, Martin said. 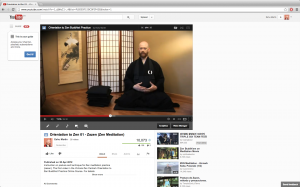 Words like “Zen,”, “dharma”, “karma”, “nirvana”, and “bodhi” have been used to market breakfast cereals, tea, body wash, fitness clubs, and rock bands, he said. With increasing frequency, more and more medical and psychological research are making it clear that meditation creates powerful benefits for mind and body.

Yet unless you live in a major urban center, it is unlikely you will have access to an established meditation center within 50 miles, he said. And even if you are in a city, it is possible that the particular tradition that interests you may not be represented at all! There are also many individuals who, due to physical, mental, emotional, or circumstantial limitations, are not able to engage with a community even when one is  available.

“It all started with the Living Zen Podcast in October 2009,” Martin said, “Originally, the idea was to make it possible for local members to catch up on dharma talks (teachings) that they had missed for one reason or another.”

Martin said he was surprised then when episode downloads surpassed 100,000 before the end of the first year, and he began to receive emails and comments from people around the world, expressing thanks for making the podcast resource available. Four years later, the podcast is nearing 750,000 downloads. 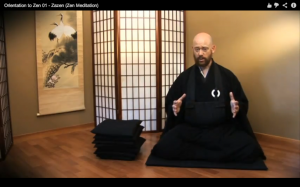 “It was clear that the locals weren’t the only ones listening!” he said. “I felt that by using technology, there was a whole lot more that could be done to support people who practice remotely.”

In 2010, the Victoria Zen Centre began a new program called “eZendo.” Using Adobe Connect software, participants can log into a conference room where they will find a video feed of the center’s meditation hall, and a list of everyone who is practicing together.

“It’s a very simple offering,” Martin said. “You log in, I ring the bells, and we all sit together, no matter where in the world we actually are! Participants can come and go as their circumstances demand, and there is no disturbance because it is only a name that appears and disappears from the list. If you happen to sleep in, or if you live in another time zone, it’s no problem! Each episode is recorded, so you can access it at your convenience.”

Martin emphasized that the center’s online offerings are no substitute for an “in-the-flesh” practice community. 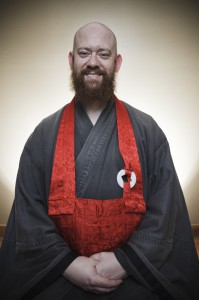 Eshu Martin expresses joy that online teachings are reaching so many people.

“I look at it as a continuum, in which in-person practice with a teacher and sangha (community) are the ideal,” he said. “In cases where that just isn’t possible, virtual community and online support beats nothing at all, no question!”

The transition to full online teachings has developed gradually, as the technology has evolved.

In 2011, Martin began using Skype for meetings with center members to stay connected, and to support practice when members were traveling, or weren’t able to meet with him in person.

“I thought, if this works for our members, why not everyone else?” Martin said.

“Remote supporters began to contact me and ask, ‘How can I do more? How can I take the next step to engage in Zen practice?’” Martin said. “People were connecting with the teachings, they were excited to get started, but there were still no resources in place to help them do that.”

All of these independent online resources now fit together into a single program called the “Non-Residential Training Period” (NRTP). Currently offered once a year, the NRTP offers a focused matrix of training supported by all of the center’s online resources, contained within a tiered structure of commitment.

“We simply looked at a basic residential training program, and broke it down into component parts: meditation, chanting, listening to dharma talks, meeting with the teacher, study, work practice etc.,” Martin said. “Taking these components, we then created four degrees of commitment, which allow individuals of any experience level to engage in a program that is challenging for them, but not overwhelming.”

Because NRTP participants are practicing in the context of their everyday lives, amidst their work and family, it is up to each participant to create their own training schedule, and ensure that they fulfill the commitment they signed up for.

All of this online activity is rooted in a robust “Orientation to Zen Buddhist Practice” course, which Victoria Zen Centre developed in 2000 at its zendo in Sooke, BC. In that program, which is no longer available,  participants met with an instructor once a week for four weeks, to learn about a specific aspect of Zen form and practice, and to engage in a gradually increasing schedule of daily sitting meditation practice.

Martin is enthusiastic about the future of online offerings at the Victoria Zen Centre.

“The key to online training is creating a community that is structured, supportive, and accountable,” he said. “Technology is making that task easier every day, and is helping to make it accessible to anyone who wants to take part.”

For more information on the online offerings through the Victoria Zen Centre, please visit their website, or contact office@zenwest.ca

0
SHARES
Share
Posted Under: 2013, Dharma In Canada, Spring
About the Author: Eshu Martin
Eshu Martin is the abbot of the Victoria Zen Centre, where he has been working to make Rinzai Zen practice more accessible and available to people around the world.Photographers: Eshu Martin, Dan Eastabrook, Danielle Pope, Charles Yushin Rose