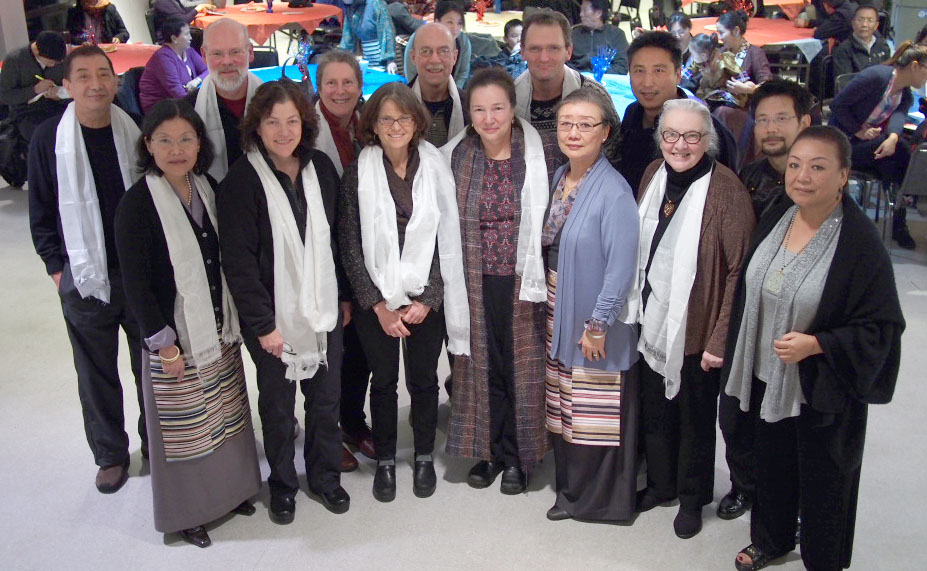 Kesang Chokyi cannot believe it’s been 20 years since she first stepped off a plane and arrived in Seattle from India. As part of the U.S. Tibetan Resettlement Project, she was among 1,000 Tibetan refugees living in India and Nepal, who were selected through a lottery to immigrate to the United States.

Most of the immigrant Tibetan families, like Chokyi’s, have grown numerically and economically since then. Not only have they been able to re-unite with their families…a few of them have also been able to help their relatives and their families immigrate as well.

At an annual Seattle event this past November to mark the anniversary of the awarding of Nobel Peace Prize to His Holiness the Dalai Lama, the Tibetan community also invited sponsors and volunteers of the Tibetan Resettlement Project to a dinner and cultural performance, to show their appreciation and gratitude for their commitment and help.

Susan Gleason, one of the key sponsors who was instrumental in the Seattle chapter of the Tibetan Resettlement Project, humbly said at the event, “I was grateful to just get the opportunity to help the Tibetans.” 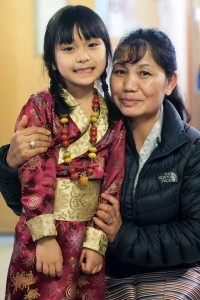 Kesang Chokyi and her niece Tenzing Kyizom, 6, at a Tibetan gathering.

Tsering Yuthok, president of the Tibetan Association of Washington, gave a speech and thanked all the sponsors involved. She added, “Through all the years that Tibetans have lived in the area, I have often proudly proclaimed, even when I was working at the mayor’s office, that ‘We came with nothing, and not a single Tibetan I know is on welfare or public assistance.’”

A thriving Tibetan language and culture class, established by the association, meets Sundays to teach children to read, write and speak Tibetan. The children also learn Tibetan history, various basic Buddhist prayers and traditions, Tibetan songs, dances and even plays, which they perform at community gatherings.

About 20 children ranging from 5-15 years of age are enrolled and are taught by a team of community members and volunteer parents. A highlight this past summer was the formal participation of the Tibetan Association of Washington at Seattle’s annual Seafair Parade.

The Tibetan Resettlement Project partly arose from the efforts of the Tibetan government in exile, which has always looked after the welfare of Tibetans living in India and Nepal.

In the mid-1980s, Tibetan government officials lobbying in Washington, D.C. for congressional support for the Free Tibet movement, chanced upon an opportunity with Sen. Edward Kennedy to gain immigrant visas for a limited number of Tibetans from India and Nepal. The intention was to accord these Tibetans a chance for a better economic future in the West. Achieving this would potentially mean the progress of the Tibetan community as a whole, and would garner international support.

By 1989, with the dedication and hard work of a few Tibet support groups and many notable individuals, The Tibetan-U.S. Resettlement Project (TRP) was established.  The national headquarters was established in New York, to support 21 clusters of Tibetan in 18 states. 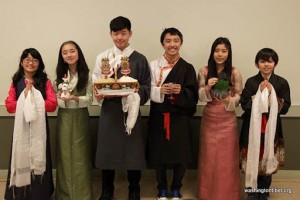 A provision was introduced by Rep. Barney Frank (D-Mass), under the Immigration Act of 1990, to give a boost to Tibetan immigration by providing 1,000 immigrant visas.

The requirement before the arrival of each immigrant was a job offer, as well as a sponsor to host the individual for three months, a daunting task that was accomplished with the help of many volunteers. Eventually the Tibetans could file for reunification with their families.

Janis Wignall responded to a 1992 call for volunteers to help Tibetan families from India.

“I had a room but not much money, and I knew I wanted to help,” she said, adding that while she initially envisioned a few weeks of volunteering, gradually found it a long-term project with which she is still involved.

“The pay-off is huge,” she said, “in terms of how far these families have come.”

Chokyi recalls the bittersweet moment when she first heard from her friends that her name had been selected. The promise of a brighter future was weighed down by the difficult fact that she would have to leave her family, husband, two young children, her parents and everything familiar, to start a new life in the U.S.

The coveted opportunity of a new economically richer life in the United States would grant her children better educational opportunities.  Yet the harsh bitterness of having to leave her family…to just pick up to go live literally on the other side of the globe, in a land where she had no knowledge of the customs nor language, was painful. 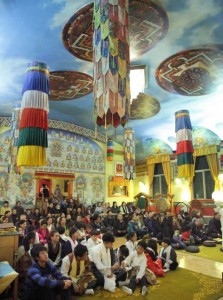 The Tibetan community gathers for monthly prayer session, at Sakya Monastery in Seattle, for Tibetans who have self-immolated in protest.

But for Tibetans like Chokyi,  who had already been uprooted from their homeland forcibly when China invaded Tibet in 1957, and who had been forced to settle in strange foreign lands, resilience and adapting to change had become familiar territory. This theme of opportunity mixed with apprehensive sadness probably rang true for all 1,000 Tibetans who won the visa lottery.
On April 16th, 1992, the first batch of six Tibetans arrived in Seattle, and by September 1993 the remaining 30 had arrived and settled in Seattle.

Tsering Yuthok was then president of the Tibetan Women’s Association, a community group comprised of members from the handful of Tibetan families that already lived in the area at the time. She recalls leading a contingent of members to the airport to welcome the new arrivals.

“I was very excited.” she said. “We organized a pot-luck welcome dinner for the new arrivals, where we went about answering questions and disseminating helpful information about living here.”
The influx of Tibetans gave the existing Tibetan community a jolt of energy, and the local Tibetan community today has grown to about 300. It was perhaps this growth that contributed to the Tibetan Women’s Association expanding to become the Tibetan Association of Washington.

But for Chokyi, as for many Tibetans, the sudden arrival in the United States, and separation from her family, was harder than she had anticipated.

Within a month of arrival in Seattle, she suffered a breakdown that forced her to return to India, unsure if she would recover.

“All of a sudden I was in this new country,” she said. “I didn’t really know the language, I missed my kids, my husband, my family, and friends.”

Everything was so strange. It was too much for her to bear.

“I don’t really know what happened,” she says now. “I just broke down.” 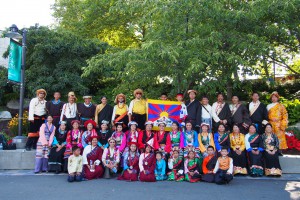 But she also didn’t give up, and two months later Chokyi returned to the Seattle area, fully healed.

She now feels the combination of prayers, pujas, and the comfort of being around her family, probably healed her. Soon, with the support of her sponsors and other Tibetan community members, she was able to get a job and begin life anew.

She teamed up with a group of Tibetans who lived together in Seattle’s University District area. She only needed to wait for five years, and she would be united with her husband and children…a new dream. She was already making new plans.

But tragedy would strike days after her family in India obtained visas to come to the U.S. Her husband, the father of her children, suddenly died from an illness a month before he and his children were to board the plane that would take them to their new life in the United States.

Chokyi left for India once again, but this time to do pujas for her husband’s soul, and then to bring her children to the U.S.

Now, 20 years later, Chokyi ‘s children are grown and she continues to be active in the Tibetan community.

This last November, the day after the celebration of the Tibetan Resettlement Project, she and a group of Tibetans drove up to Vancouver, B.C., for a mass protest outside the Chinese Consulate. 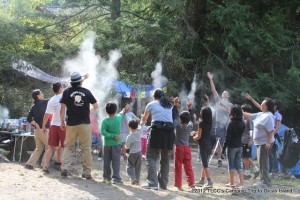 Tibetan parents and children, from the Tibetan Language & Culture Class, throw tsampa in the air to invoke a safe and pleasant experience during their annual camping trip to Moran State Park on Orcas Island, Wash. Tsampa, roasted barley flour, is a traditional Tibetan food.

The Tibetan community has been holding monthly prayer sessions for the souls of mostly young Tibetan Buddhist monks and nuns in Tibet who have self-immolated themselves in protest of Chinese rule.

Lobsang Sangay, the political leader of the Tibetan government in exile, on Feb. 16 testified that 107 Tibetans had burned themselves in protest since 2009, before the Canadian Parliament’s Subcommittee on International Human Rights.

Tragedy often brings people together, and it has been so for the Tibetan community as well. The community now holds monthly prayer sessions for self-immolation victims at Seattle’s Sakya Monastery.

Presided over by two resident monks, the Tibetans spend an hour and half reciting various short prayers and the “Tsemai Yonten,” a very popular prayer for the quick and easy rebirth of those who have departed in the mass of self-immolations in Tibet. This is then followed by 15 minutes in silent meditation.

Families take turns sponsoring snacks, tea and refreshments for the attendees. These are somber events, and oddly missing is the usual energy of a Tibetan gathering: Children running amok, the women loudly giggling in their little huddles about something someone said, the men immersed in their animated discussion of Tibetan politics, often interrupted by loud guffaws.

Not many children are around, and the otherwise typical Tibetan smiling faces are replaced by more solemn ones. Shoulders stooped, the elders murmur silent prayers, while their fingers roll earnestly over their thek-nga or malas (Tibetan rosary).

Despite her busy schedule Kesang Chokyi has made it to the prayer sessions every month. She said that being in the U.S., where other Tibetans seem so far away from each other, and engrossed in their own lives and families and their jobs, can sometimes make her feel a bit detached from what’s happening in Tibet. It’s very different from the tight-knit Tibetan community in India, where news travels fast and the effects of it are more immediate and strong.

Being in a monastery like Sakya calms her, Chokyi said.

“It’s a more familiar setting, as most monasteries look alike in the inside,” she said. “As soon as I step inside a monastery I just feel closer to home…I don’t know, as if I just stepped outside I’d hear and see the sounds and smell of home,” referring to Dharamsala, her hometown in exile in India.

The loud sound of the cymbals through the loudspeakers in the monastery snap her awake, and reminds her she is in Seattle. She joins her hands together in a namaste pose, closes her eyes, and begins joining the growing murmur of group prayer. She says she mostly recites “Gyawai Shapten,” a prayer for the long life of the Dalai Lama.

“I’m thankful for my life and the opportunity I’ve had to come to the US. This is all due to the grace of Gyala Rinpoche, (a term often used by Tibetans to refer to the Dalai Lama),” she said. “I am content. I have two great children, and not only have I been able to send money back to my family and relatives in India, but I also make monetary contributions to the Tibetan Government in Exile, by donating money every time a need arises.”

0
SHARES
Share
Posted Under: 2013, Compassionate Action, Spring
About the Author: Jamyang Dorjee
Jamyang Dorjee is a Tibetan Buddhist living in Bothell, Wash., with his wife and two children. He is a former president and board member of the Tibetan Association of Washington. He volunteers as a teacher at the Tibetan Sunday Language & Culture School, and sits on the school's steering committee.Photos by: Kurt Smith