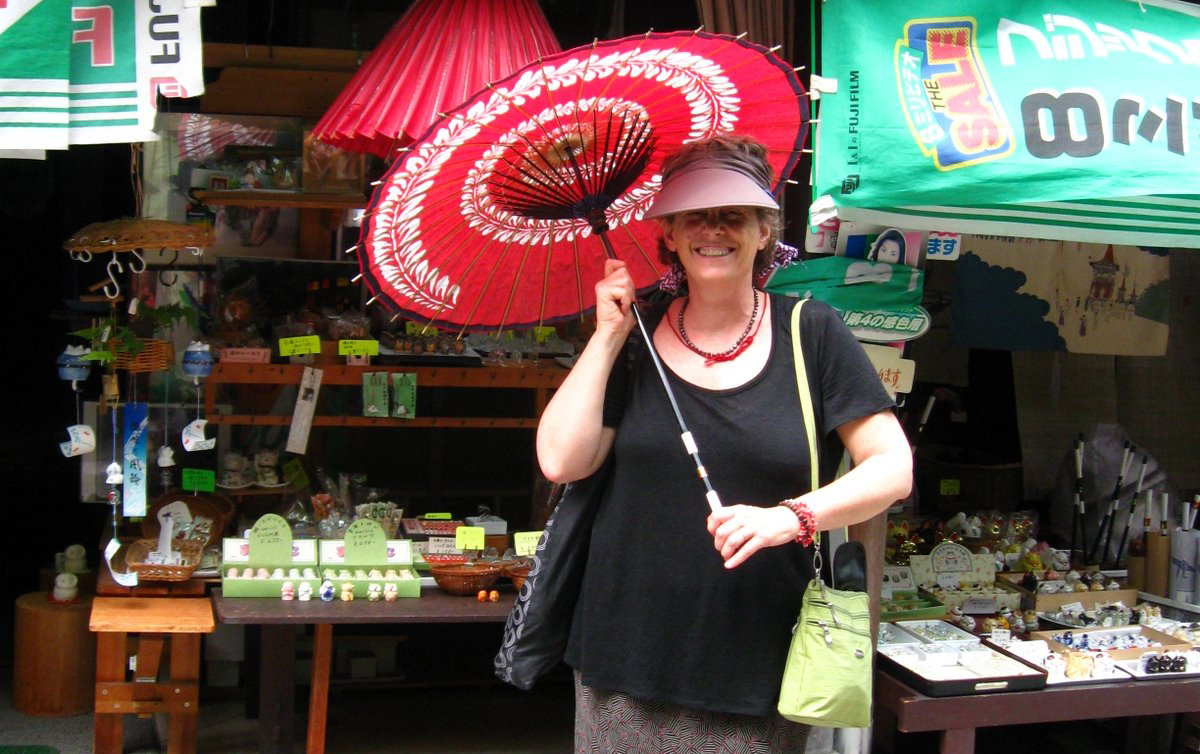 Author Judith Marcus, having a trip of a lifetime in Japan after the aneurysm. Summer, 2009.

This is my story – “Uncoiling: A Memoir of Anxiety, Aneurysm and Renewal.”

The book is a memoir, just published, a contribution to the marriage between Buddhism and neuroplasticity, the ability of the brain to change and reorganize throughout life.

The book also is also about my personal experience of brain surgery in 2008 from  a ruptured blood vessel, and how that experience led me to deeper understanding.

There is something for everyone in the book: heart-racing stories, details about bodywork and somatic traditions, as well as dharma and thought-provoking suggestions to combine allopathic and alternative medicine. And the book also includes plenty of lighthearted stories, the perfect complement to trauma. 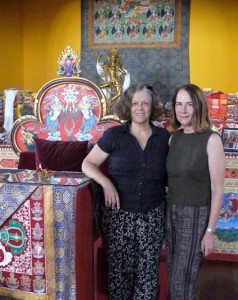 Judith (on left) with dakini sister in the Tara Temple at Tara Mandala, after Judith’s 2012 interview with Lama Tsultrim Allione.

For more than 30 years I have been a bodywork therapist with a master’s degree in Somatic Psychology, in private practice in Seattle.

In fact it was meditation, and my prior study of Buddhism, that led me into a career as a bodyworker. I integrated the teachings about mindfulness and stillness into my bodywork practice, and as a teacher of the somatic arts.

I was introduced to Zen Buddhism in the 1970s, initially intrigued by Japanese arts and by the idea of meditation, which was all the rage at the time.

I studied with Joko Beck Sensei and Katagiri Roshi, and went to the  San Francisco Zen Center many times to sit meditation and hear the lectures.  Sometime later I was introduced to vipassana meditation through Jack Kornfield’s weekly lectures in Marin County, California.

I began to weave my own understanding of Buddhist practice with my career in bodywork. When I moved to Seattle, I continued my explorations with Tsultrim Allione, after reading her book “Women of Wisdom.” I was curious about the Vajrayana branch of Buddhism, with all its strong images, that was so different from Zen.

So I began to attend retreats with her and took vows with her, since she travelled to the Seattle area regularly. Through her I met Namkhai Norbu Rinpoche, and have studied with him as well.

Throughout those years I’d been experiencing increasing anxiety, relying heavily on Buddhist practices, books, magazines and teachers of various traditions to help me work with my wild states of mind. 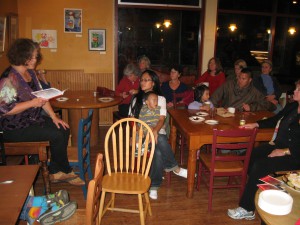 The Tara meditations and other mantra recitations helped me to quiet my mind, as did the breathing practices. In particular I liked the Chod practice, for it spoke directly to my explorations of body/mind integration. I’d have long conversations with Buddhist friends and colleagues, as we tried to understand the mind, the brain, mental stability and health.

Although I was a long-time meditator I couldn’t quiet the thoughts in my mind, which were increasing in their speed and intensity. My brainstem would shake, vibrating so strongly I thought my head would fall off my torso. Why wasn’t anything like this written about in the literature? Was this just anxiety, a spiritual obstacle, or some other bizarre health issue?

One wise friend finally said to me, “We do what we must in order to help others!”   And so I began to take a medication to stabilize my mind, which was clearly leaving my control. I continued to try to heal using the extensive bodywork and movement traditions I relied on and that my cells knew so well.

And then my brain broke in an unexpected way: a ruptured blood vessel. Instead of ending up in the psych ward I ended up in the neuropsych intensive care unit, after brain surgery.

Even though I was heavily medicated then, I still strongly recall the Green and White Tara images my husband brought to the ICU, and placed by my bedside. These are inspirational paintings of traditional Buddhist deities or archetypes, which represent long life, protection and compassion.  They guided me through the hospital maze for the two weeks I lived there, recovering. 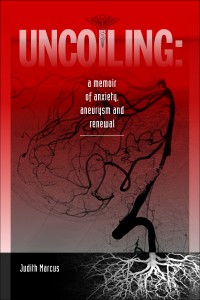 After a miraculously successful surgery I “woke up,” aware that there was minimal tissue damage.  Even today I can hardly believe the physicians repaired an artery in my brain, using what is called the coil method, accessing my brain from an artery at the top of my thigh. They didn’t even cut into my skull!

I still wonder how and if the anxiety and the aneurysm are connected.

Lama Tsultrim later told me that my husband had telephoned her for help during that time, and she prayed for me. During the summer of 2012, when I was at Tara Mandala for a dzogchen retreat, I gave her a copy of my book in a private interview and talked with her about core anxiety, a universal issue.

A few weeks after getting out of the hospital I was journaling about my experiences, trying to make sense of my life. During that time I read Reggie Ray’s book “Touching Enlightenment,” and finally found someone who was writing about what I had learned on my own: the integration of Buddhism and bodywork in a direct way.

I began to review my studies of somatics and other related subjects.  The memoir that came out of that work is a slim volume filled with facts, teaching stories, allusions and suggestions, for others interested in caring for and understanding their bodies as part of their life experience and spiritual development.

As for my own spiritual development, I feel much gratitude for simple things and a great calmness in daily life. Simple breath meditations, Tara and Vajrasattva practices, and Ganapujas with friends, help me weave compassion and grace into my life. My commitment to my bodywork therapeutic practice, to directly help others, has deepened.

0
SHARES
Share
Posted Under: 2013, Dharma Healing, Arts, Spring
About the Author: Judith Marcus
Judith Marcus MA, LMP, has been in private practice for 30 years as a bodywork therapist specializing in manual skills and body-mind integration. Her master’s degree is in Somatic Psychology. She has been a lay Buddhist practitioner since the mid-1970s, and uses Buddhist principles to integrate the somatic treatment work. She lives in Seattle with her husband. This is her first book.Photos by: Rick McKenney