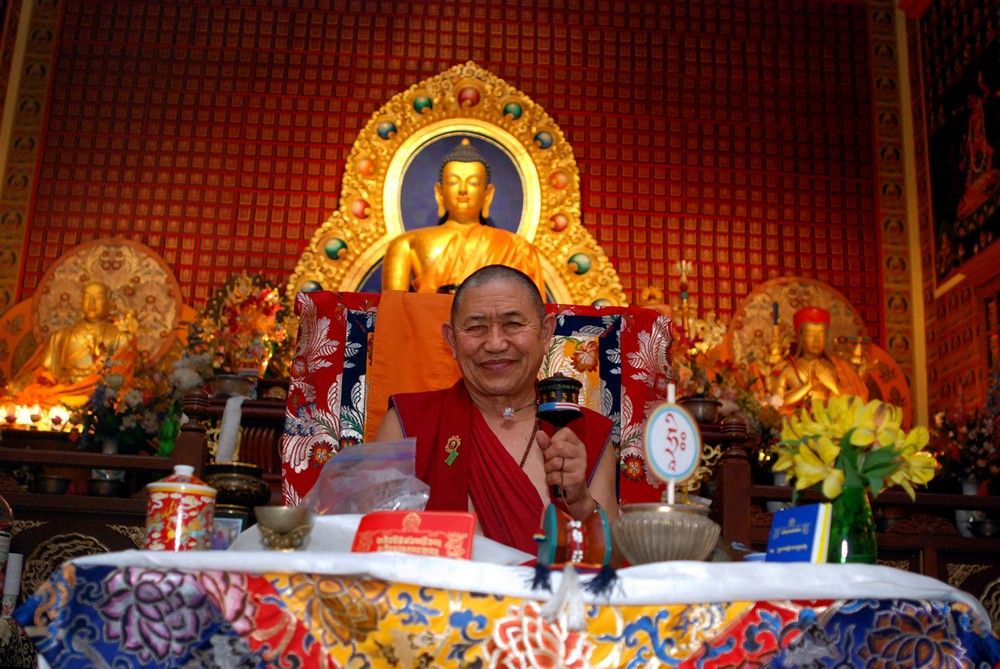 Garchen Rinpoche at Sakya Monastery in Seattle, after bestowing the Milarepa Empowerment. Rinpoche is holding his prayer wheel, and the red ‘liberation on seeing’ mantra, which he gave to students to place in their homes, is visible on his table.

On a January weekend enshrouded by fog, Drikung Seattle greeted 2013 with a visit by His Eminence Garchen Triptrul Rinpoche to Seattle, Wash., where he turned the wheel of dharma.

This was Drikung Seattle’s first event, and one sure to be mentioned for a long time by those who participated. We would like to thank H.H. Dagchen Rinpoche, and his family and the dignitaries, staff and students of the Sakya Monastery, for hosting us so graciously.

As the eighth incarnation of Garchen Triptrul Rinpoche, His Eminence is a highly regarded Buddhist teacher and yogi in the Drikung Kagyu tradition, who is also deeply respected by all Buddhist lineages.

His Holiness Drikung Kyabgon Chetsang Rinpoche, the head of the Drikung Kagyu lineage, has written that Garchen Rinpoche is “a true bodhisattva.”

Garchen Rinpoche joined the resistance when Communist China invaded Tibet, fighting to protect his country and religion. He was eventually captured and imprisoned for over two decades, during which time he endured forced labor and bitter hardships.

It was also while in prison that Rinpoche secretly received teachings from his teacher, the dzogchen master Khenpo Münsel, and secretly practiced meditation while never wavering in his intention to care for all sentient beings.

In 1980 Rinpoche was released from prison, and tirelessly began rebuilding the monasteries that had been destroyed in Eastern Tibet. His contributions reinstating Gar Monastery, and improving the lives of the area’s people, are legendary.

Today Rinpoche continuously turns the wheel of dharma, and has traveled to 33 countries while supporting 20 dharma centers, a retreat center, nunnery, college and clinic; and guiding and helping everyone along the way. No one is untouched by Rinpoche’s vast love and kindness.  In the enlightened mandala or healing energy of a great master, we can remove our limiting patterns and be inspired to develop to our fullest potential.

The movie “For the Benefit of All Beings,” a documentary about Rinpoche’s extraordinary life created by filmmaker Christina Lundberg, launched the Jan. 18-20 weekend in a theater filled to near-capacity. 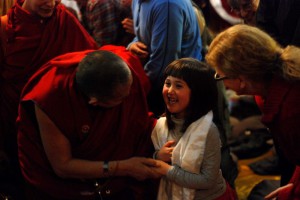 After the Milarepa empowerment Garchen Rinpoche stopped to greet and bless student Yumemi Malm, who attended the program with her dad.

DVD and Blu-ray copies had just become available and were selling well. In addition to the inspiring life story of Garchen Rinpoche, the DVD and Blu-ray discs, available online, also contain a “special features” section that includes precious footage and teachings not in the movie. The discs also come with a prayer booklet for daily use.

On Jan. 18 Rinpoche bestowed the Milarepa empowerment to a standing-room-only audience at Sakya Monastery. On the weekend, Rinpoche taught on Mahasiddha Tilopa’s well-known text “The Ganges: Essential Instructions on Mahamudra.”

People had traveled great distances to receive Rinpoche’s teachings, arriving from Ireland, Germany, Canada, Illinois, Colorado, Oregon, Idaho, California and Arizona, to name a few. The building, filled to capacity for both teaching days, included sangha from different Buddhist traditions, and even a group of Mongolian monks and a nun from Chicago.

At Rinpoche’s request the program was made available via live webcast, which drew an estimated 500 viewers worldwide.

During the weekend Rinpoche taught on the importance of “taming the mind,” the crux of Buddha’s teachings; developing our bodhichitta, the core motivation of bodhisattvas; and how to cultivate love and compassion, because, as he said, “They are the causes for happiness.”

A long-time student viewing the teachings online from New York City commented, “I have heard him teach this many times and never so completely.”

Rinpoche also bestowed Buddhist refuge vows to about 30 students, and conferred the bodhisattva vow. To the delight of everyone he also gave the opportunity to have the participants’ malas blessed, after collecting them into two large bowls. 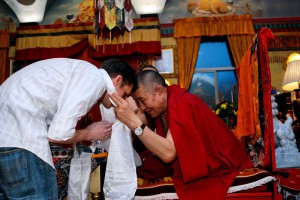 Garchen Rinpoche offered a khata, or traditional offering scarf, to each volunteer who assisted with the weekend program. Rinpoche is shown here offering a khata to volunteer Will Fausser.

According to Yanfen Wang, president of Drikung Seattle, “It is Garchen Rinpoche’s sincere wish to establish a center here in Seattle.” Rinpoche stressed the importance of centers, and emphasized that the most important thing that all his centers have in common is harmony. He also said that there is great blessing in students practicing together.

Garchen Rinpoche has advised the Drikung Seattle group to focus on practices including 37 Practices of a Bodhisattva, White Tara, Lama Chopa (Guru Yoga), and meditation. Drikung Seattle will meet for group practice twice a month, so please join us.

As the second day of teaching neared its conclusion, outside the fog had cleared and the sun has made its brilliant appearance. Inside, the feeling of warmth and joy was palpable.

As we prepared to leave, we were reminded of Rinpoche’s words about how the self-grasping mind is like an ice block of our mind, and it is by cultivating love or bodhichitta that we melt this ice block.  Once this ice block melts, it becomes one with the ocean of Buddha mind.

For more information about Drikung Seattle please see our website www.drikungseattle.com, or contact Linda Lee at lindalee.5445@gmail.com. You can also find Drikung Seattle on Facebook, and view teachings on YouTube at the DrikungSeattleCenter channel.

0
SHARES
Share
Posted Under: 2013, Sangha News, Spring
About the Author: Linda Lee
Linda Lee is a student of Bardor Tulku Rinpoche and considers herself a dharma practitioner in the Tibetan Buddhist traditions.  Lee said that helping with Garchen Rinpoche’s visit was nothing but a great honor and a joy.  She lives on beautiful Vashon Island with her husband, two dogs, and cat.Photos by: Katia Roberts