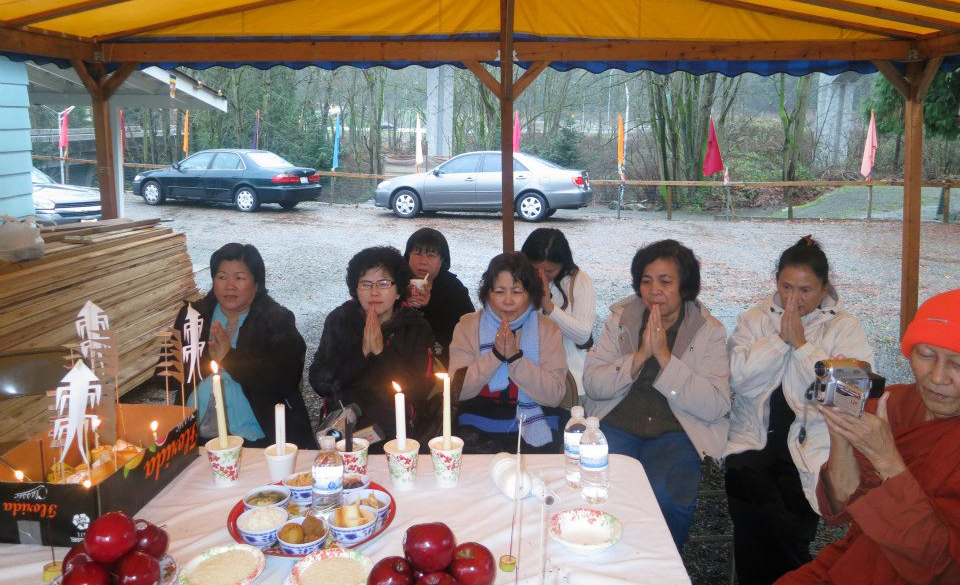 Members of the Sarana International Buddhist Center pray before start of construction, in late 2012.

The Sarana International Buddhist Center, for the last decade operated out of a modest former family home close to the intersection of two Seattle freeways, is getting a new dharma hall.

In January workers broke ground on the new 1,400-square-foot building, which is to be completed in May, said Bhante Polwatte Pagnananda, abbot of Sarana. 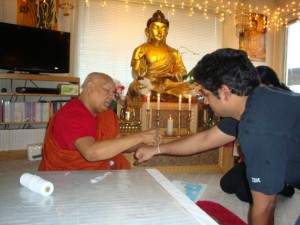 Bhante Polwatte Pagnananda ties a blessing cord on a man at the center.

The new building, in late February little but a foundation adjacent to the existing house, will triple the space for programs, adding room for up to 175 people, Pagnananda said.

Pagnananda, who came to the United States 13 years ago, is from Sri Lanka.

The new building will allow expansion of Sarana’s many activities, including dharma practices, weddings, funeral services and teachings, he said. About 100 people, most of them Cambodian, come to the Sunday morning services. 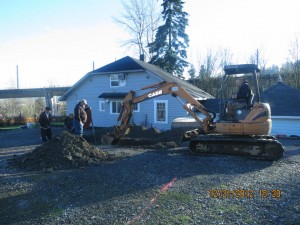 Excavation starts at the site for the center’s new dharma hall in Tukwila, northeast of the intersection of I-5 and SR 218.

Every second Saturday of each month, the temple offers a dharma school for children.

In addition to the new building, Pagnananda is planning a 15-foot-high statue of the Buddha at the site, and extensive landscaping and parking.

“A couple of years from now it will be a nice religious place,” he said, expressing confidence he will find funding for the work.

Pagnananda estimated the entire project will cost $250,000, and the building itself $125,000. The temple sits on an acre of land just to the northwest of the intersection of I-5 and SR 518 near Sea-Tac International Airport. The light rail to the airport soars close by overhead. 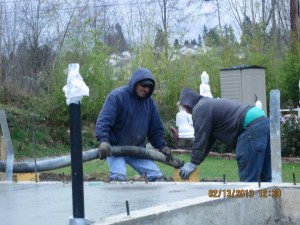 Workers pour concrete for the new hall’s foundation, with Buddhas in the background.

While all of this traffic can make the site noisy, inside the temple it’s very peaceful, and Pagnananda seems relaxed, with a twinkle in his eye.

“My main purpose is peace, happiness, harmony, and prosperity,” he said. “It is kindness and compassion we’re going to teach to people.”

Pagnananda said the neighbors, and the city of Tukwila, have been very supportive of the temple’s growth.

“All the neighbors, they are very kind to us,” he said. “If not, we cannot do this.”