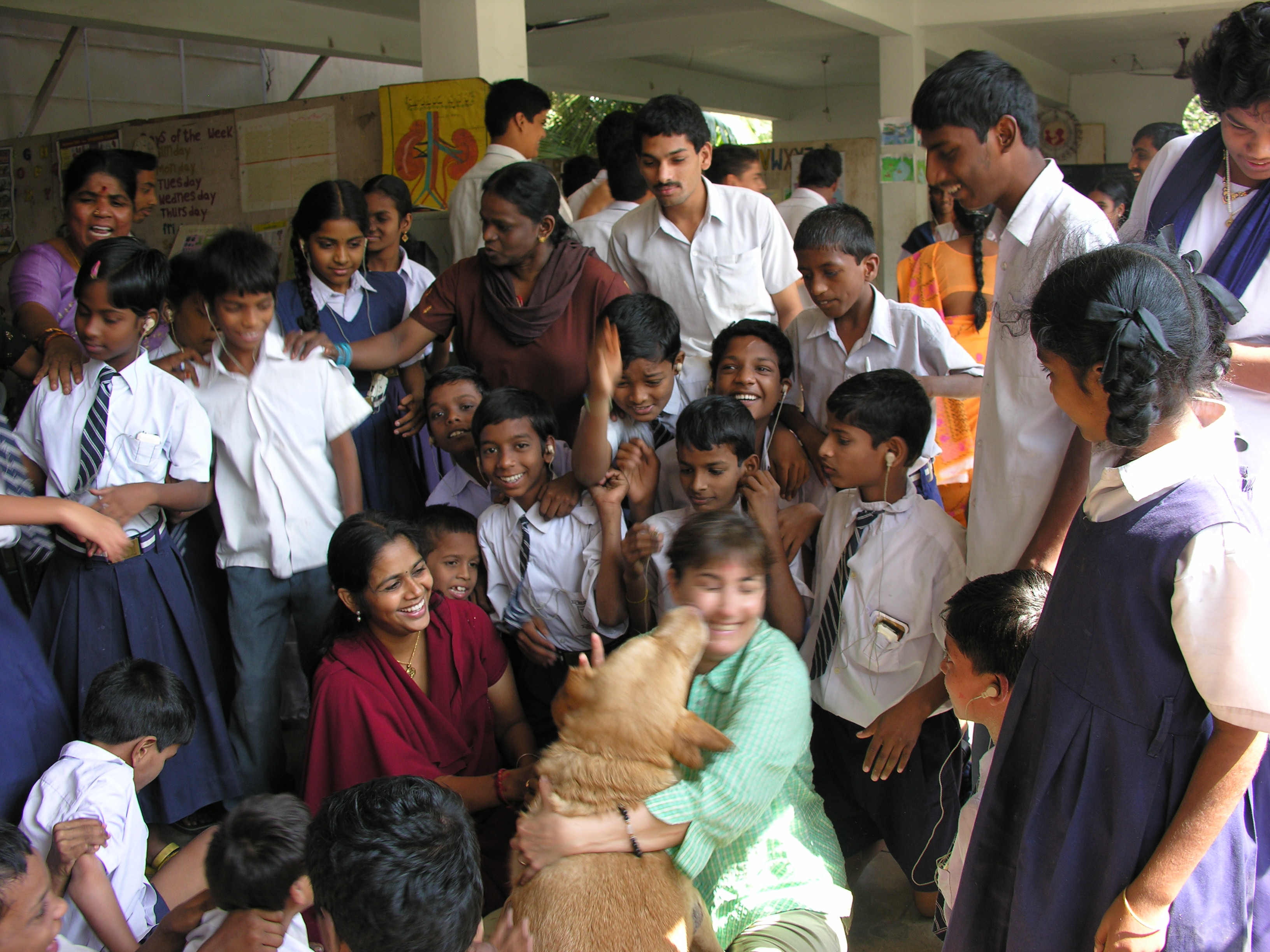 Eileen Weintraub with “Vicky”, the Dr. Paws therapy dog, at the Simhans School for the Deaf in Visakhapatnam, India.

Helping animals in need has been a central mission of my life, from rescuing stray cats and dogs as a child in Brooklyn, N.Y., to my current work helping meet the needs of destitute animals in India, from my home base in Seattle.

Living in Seattle has been a pleasure, as there is a heightened eco-consciousness here, and so many animal rescuers.

After decades of working for animal advocacy in California and then Seattle, with organizations including Northwest Animal Rights Network and the Feral Cat Project, I felt I could turn my attention wider. And so, when the online world began in 1998, I turned towards India!

While visiting India for the first time in 2003, I was honored  to meet the Indian animal welfare groups there, and vowed to continue helping them.  To help the urgent needs of animals there, in 2008 I started the Washington state non-profit 501(c)(3) Help Animals India, which distributes grants, supplies, and advice to people in India working to benefit animals.

(And donations accomplish a lot in India, because the cost of labor in there is just 10 percent of the cost here.)

In my role I try to share in the sweat, trials and tribulations of the Indian activists whom I greatly admire.  Every day I am impressed by the many ways these dedicated people make a difference in relieving animals’ suffering, and so have been helping as much as I can from my comfortable home in Seattle. This work keeps me very busy!

I am continually humbled by the ingenious solutions to innumerable problems that the people in India devise, often bypassing our Western ideas and coming up with better ones.  Lack of resources often leads to practical solutions.

Helping animals is also helping people, and both go hand-in-hand towards a kinder world.

A visitor can see the need even in Bodhgaya, India, the place of Buddha’s enlightenment. Just as in the ancient world, present-day Bodhgaya includes human beggars, and destitute animals, living together in the streets. 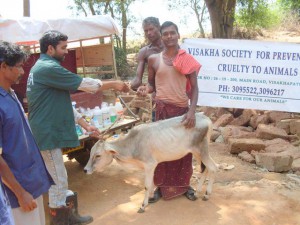 Farmer receiving life-saving medications for his animals from the VSPCA disaster relief program, after floods.

Help Animals India supports the work of 12 Indian animal organizations, all of which are listed on our website, all which desperately need our help.  Our achievements www.helpanimalsindia.org/achievements  page tells the story of recent accomplishments of which we are very proud, helping organizations such as VSPCA, HOPE, and Animal.

The work and challenges can seem overwhelming, but when you focus on one animal and one project at a time, you can have a great sense of achievement.

In addition to daily rescue, the groups we support are racing to perform animal birth control, and to reduce the rabies among the community/street dogs that are all over India, and at risk of being brutally killed.

These organizations also are trying to meet the challenges of the burgeoning pet business.  It is appalling to see the beginnings of a throw-away pet culture.

The work of adoption and fostering unwanted pets is something we in the West have worked for in the last 100 years, so India had a lot of catching up to do.

Those who do love their pets are unable to find proper care for them, as few qualified veterinarians are available. The medical attention that people can find, risk their pets’ lives due to incompetency, or lack of sterile conditions. Cat spay/neuter procedures are  only slowly getting known!

All this adds daily to my resolve to help. 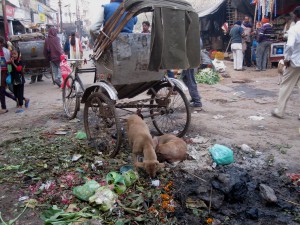 Street dogs are forced to forage for food in trash heaps, if they are to survive.

Over the years I have watched some situations improve from abhorrent to barely acceptable, as international groups have stepped in to support the maturing knowledge of Indian animal advocates.  At the same time an increasingly crowded, polluted and economically stressed India have increased problems of wildlife poaching, habitat loss and degrading environment.

Modern India is a country where millions of animals visibly suffer severe neglect or abuse. Overpopulation, poverty, pollution, superstition, apathy and ignorance all contribute to their plight. In a country where human misery and impoverishment remain high, the welfare of destitute animals is a low priority.

India is famous for her “sacred” cows, and even though there are 400 million vegetarians there are few vegans and so all are drinking a lot of milk.  That makes for spent dairy calves and male calves and bulls left to wander the streets, or sent by horrendous transport to states in India where it is legal to slaughter them.   Next to China, India has the largest leather industry in the world.

I trace my interest in helping animals to Brooklyn, where I grew up in the 1960s, and where there were “stray” dogs and cats in my neighborhood. I quickly learned that to help them and other wounded creatures, I had to go against society.

I did the best I could to learn from the neighborhood “cat lady” how to benefit the unwanted, the homeless, the shunned and diseased, often against my family’s and neighbors’ wishes. 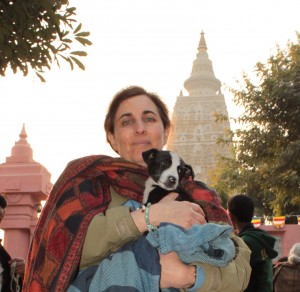 Eileen Weintraub holds Shyam, a rescued puppy, in front of Mahabodhi Stupa in Bodhgaya, India. Shyam shortly afterward died of distemper at a shelter, which motivates us to improve standards there.

A straggly sickly kitten, which the vet said I should “take back to where I found it,” grew to be my cherished friend, and I reasoned that the only reason I fiercely protected and loved “this one” was because I knew him so well.  But then I thought all the other animals must have also had individual personalities — I just hadn’t had a chance to know them.

Even Cookie our parakeet was as a strong character who displayed amazing intelligence in his tiny brain, which only strengthened my convictions.

I met the Buddhist dharma in my early 20s, and learned teachings such as this, of the Buddhist “Four Limitless Meditations”:

May all leave attachment to dear ones, and aversion to others

And live believing in the equalness of all that lives (Upakkha).

I learned that all sentient beings have Buddha nature, and this fit with my attitude towards animals.  My personal observations showed me they had many of the same “Kleshas” (Buddhist mental states of suffering) as we did, but they also suffered from being mostly without speech, and subjected to abuse by the dominant human race.

I also found that helping an animal was often easy, and even saving a life was possible. Working with animals was a way to benefit beings caught in what Buddhist cosmology considers the three lower realms of existence.

When we step in and make a difference to an animal’s life, I believe we can change their entire life continuum. Even if they have suffered they will then be introduced to kindness from us, which will positively influence their continuation even beyond this birth.

Each act of benevolence can bring into an animal’s consciousness some view that it doesn’t have to a life of constant strife. A new understanding through our example to them is introduced — that a world of compassion is possible.

In the late ‘70s I was honored to be able to be the caretaker for the visiting 16th Karmapa’s birds, at the Woodstock, N.Y. monastery where I lived.  Later, it was a major milestone in my life when the “new” 17th Karmapa not only became vegetarian, but proclaimed that henceforth all of his centers and monasteries would also be vegetarian.

In my most recent trip to India in 2010 I finally visited one of the groups that first introduced me to Buddhist philanthropy in India, MAITRI  in Bodhgaya.  Now just one of the groups we support,  this group helps the people and animals in that impoverished region in myriad ways, and was able to help them more substantially with the dollars raised from Seattle.

Thank you for your interest in Help Animals India! We wish you all success in your worthy activities, to bring more happiness into our world.

0
SHARES
Share
Posted Under: 2013, Compassionate Action, Spring
About the Author: Eileen Weintraub
Eileen Weintraub is founder and president of Help Animals India, an all-volunteer charity, and is also a practicing Buddhist. She lives in Lake Forest Park, just north of Seattle, with her understanding and supportive husband Mark Daniel Johnson, and with rescued companion animals.Photos credits to: