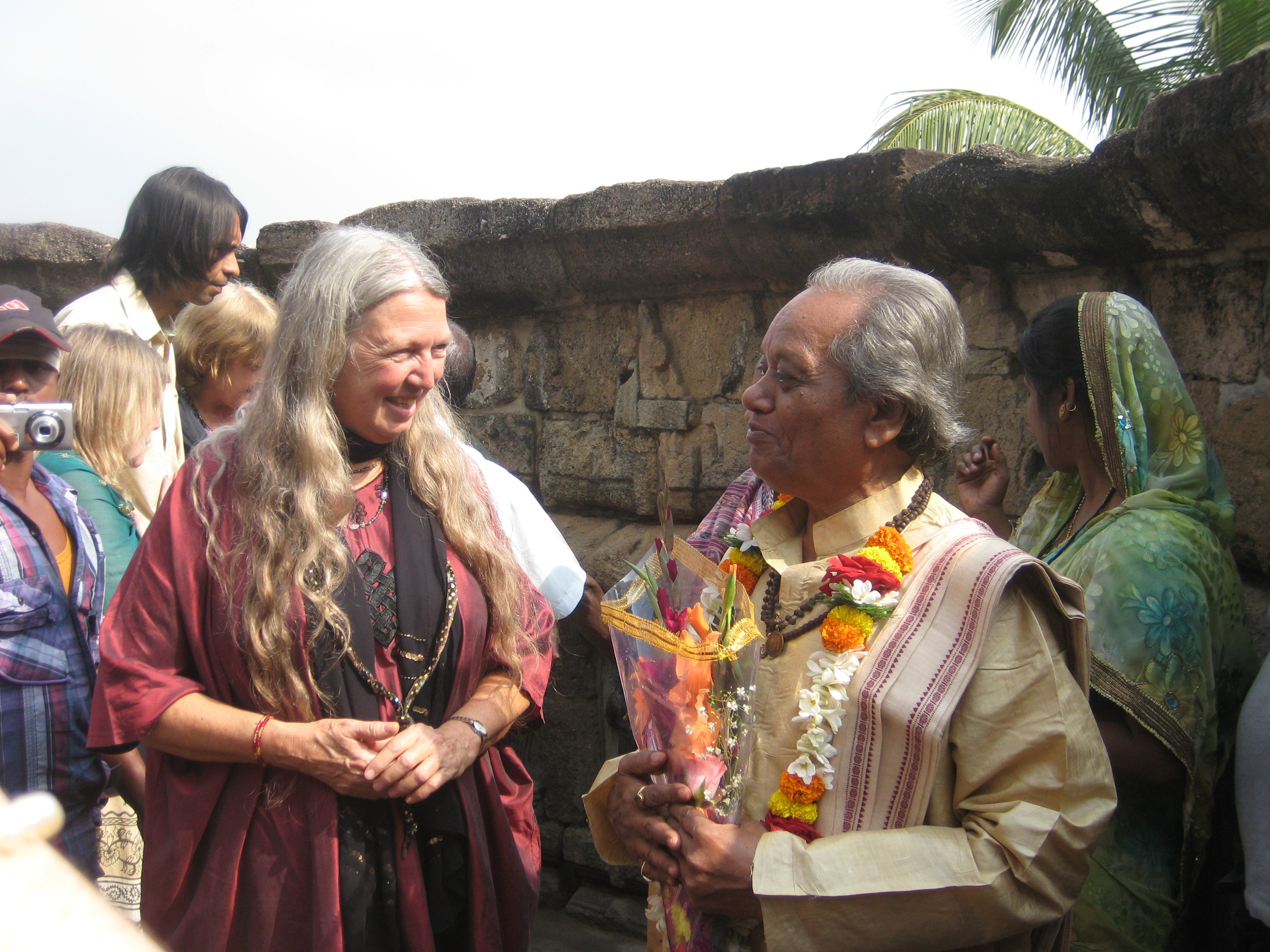 Dance teacher Prema Dasara and her Guru Ramani Ranjan Jena, whom she hadn’t seen in 20 years, and who traveled to meet with her at the 64 Yogini Temple.

Six women from the Pacific Northwest spent six weeks in Thailand and India earlier this year, performing the “Mandala Dance of the 21 Praises of Tara,” to many appreciative audiences.

The women timed their pilgrimage to coincide with the 13th Sakyadhita Conference on Women, Jan. 5-12 in Vaishali, India, which was coordinated by Sakyadhita International President Christie Chang, and founder Ven. Karma Lekshe Tsomo.

This was the fourth pilgrimage led by our teacher Prema Dasara, who has upheld the Taradhatu dance tradition for many years. Taradhatu’s mission statement is: “Uplifting Humanity With The Sacred Arts,” and our name tags read, “A Delegation of Love and Inspiration.”

This time 20 of us from three countries traveled together across India from the north to the south, and then back to the foothills of the Himalayas. During that time we offered the dance, a celebration of the female emanation of compassion Tara, at Buddhist and Hindu centers and temples, and even at an engineering school!

Four of us started out from the Pacific Northwest: Helen Appell, Phyllis Moses, Suzie Scollon, and Elaine Waller-Rose. To our surprise and delight we were joined along the way by Gina Fulop-Thomas and by Diana Ingalls-Farrell, who is on the executive board of Sakyadhita USA as treasurer, lives in Olympia, Wash., and has been associated with Sakya Monastery for more than 20 years.

“For me the dancing and chanting were transformational,” Waller-Rose said. “I could feel myself becoming Tara and her compassion and love flowing through me. I felt that all of the women dancing were connected in spirit as one.”

Scollon said she went to dance praises to Tara to meet other pilgrims, to visit sacred places and to attend teachings.

“It was gratifying to see the sources of inspiration of our teacher Prema Dasara, the places she once lived, and her Orissa dance teacher,” Scollon said. “It truly was an epic journey of bridging cultures, igniting inspiration, and bringing joy as we integrated the secular with the sacred, the mundane with the sublime, and the ancient practice of the deity Tara with a modern approach for empowering women.”

Many lamas including the Dalai Lama have witnessed and blessed the dance. Nuns from Lama Zopa’s sangha are taught the dance in Nepal, and he has suggested that his sangha in Tonasket, Wash., offer the dance to their community – which will happen next June. 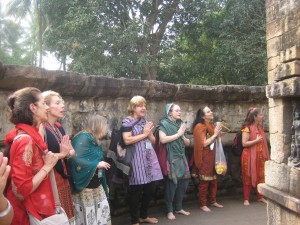 Dancing at Hirapur, the Temple of the 64 Yoginis in Orissa.

The Buddha said, “Music softens people’s hearts and puts them in a more receptive mood for the dharma,” something we found to be true wherever we went.

We began our Asian dance pilgrimage on the Jan. 1, New Year’s day, at the center of Mae-Chee, a senior female Buddhist monastic, an incredibly creative oasis of meditation on the outskirts of Bangkok.

So it seemed fitting that six weeks later we completed our last dance of the pilgrimage on Feb. 11, the Tibetan New Year Losar, at the Tibetan Buddhist pilgrimage site of Tso Pema, at the Indian hill town of Rewalsar.

In Bangkok, two days after offering dance at Mae-Chee’s center, we met with Ven. Dhamananda, the first fully-ordained Theravada nun in Thailand, who witnessed the dance and said, “I felt like I was one with the dancers, no separation.”

This is similar to the view of Bokar Rinpoche, who once spoke of the benefit to people watching the dance, saying there is the possibility watchers will feel the dance, the dancer, and the observer as one, with no separation.

From Bangkok we went on to spend a week in Vaishali, India, where the theme of the Sakyadhita conference was “Buddhism at the Grassroots,” which the Taradhatu organization easily exemplifies. Every day we gathered with women from many countries, nuns from Taiwan, Spiti, Kinnaur (India), Vietnam, Korea, Indonesia, and Europe.

Although there was an unusual cold snap in the area, everyone’s hearts and spirits were uplifted during the week. The power of over 600 people from 37 countries coming together to share insights, arts, and academia about women in Buddhism was delightfully ennobling.

Carey, one of the pilgrims, said, “It was so precious at Vaishali to feel the softness and gentleness of the nuns, and yet the extreme power of presence.” 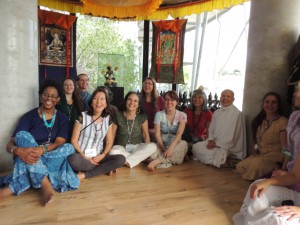 The dancers gather with Mae Chee (in white) in Thailand, in her Tara room.

Said Appel, “How fitting that a group of women would gather in Mother India to joyfully sing and dance! After my years of study there and receiving benefit from her ancient lineages and present teachers, for me, performing the Tara Mandala was a celebratory and respectful offering to India, for her source of profound dharma inspiration.

“The union of women in dharma song and dance created a wide energetic net of support, magnifying and radiating the wise and loving female spirit,” Appel added. “It is timely for India, in her current universal struggle for the feminine [as well as masculine], to rise in wholeness and empowerment.”

The beauty of the Mandala Dance is that it is a movement meditation. One need not be a trained dancer, and in fact, many of the women there were not. From a crescent moon shape we then form concentric circles, and the “Tara” is born out of that to dance the praise – one of the 21 qualities that Tara exemplifies. Each woman choreographs what that praise feels like to her.

There is also a place for men to dance, as protectors (a traditional aspect of Tibetan Buddhism) around the mandala.

One of the Sakyadhita participants was a trained dancer, and she shared with us that when she came to the first meeting she was surprised. She thought that most of the women did not look like dancers, nor did they move like them! Yet there was a power of devotion that the women emanated, an authenticity of being that was very captivating and humbling for our new friend. The dance has a way of deepening the practice of Tara at a very visceral level.

The Sakyadhita conference was a great send-off for the rest of our journey to the south of India. From Orissa, where we explored and danced at the ancient Konark Sun Temple, we then went to the Mukteswar Temple to see the open-air Odissi Dances.

Then we went to Hirapur; an ancient ninth-century temple of the 64 yoginis, a place of worship dedicated to the divine feminine. We danced inside it and offered the dance to Prema Dasara’s Odissi dance teacher – whom she hadn’t seen in more than 20 years.

We had so many incredible experiences; we are all still digesting the enormity of it.

“I love the places we go, the people I meet along the way, and most importantly, getting to personally know the people from the greater Tara sangha,” said Waller-Rose. “Getting to know people from other cultures, and how they practice, is part of my dharma practice. I’m inspired by other practitioners.”

During the trip we visited an orphanage where the children danced for us and some of us became sponsors for them; then we demonstrated the Tara dance at Kalakshetra, a prestigious arts school in Chennai.

While visiting the Matri Mandir, in the global community of Auroville, we offered the dance at their open-air theater, under a beautiful starlit sky.

We even offered the dance at the most unlikely place of an engineering school! Although India has changed so much in the last decade, in part due to the tech industry, just beneath the surface is a deep sense of faith and spirituality. The young, scientific engineers loved the dance, and cheered and thanked us at the end.

I saw my first Tara Dance offered to Tai Situ Rinpoche 25 years ago on Maui, and it’s been so beautiful to see the unfolding of his vision of the dance being taught all over the world. I wanted to be a part of that. Dancing the praises of Tara helps me to embody these teachings.

What is so precious to me about India is that it is the home of some of the world’s most sacred teachings. With the underlying feeling of sacredness in the country, everyone feels like sangha in India.

After our final dance offering at Tso Pema, site of the sacred lake of Guru Rinpoche and Mandarava, we hung prayer flags with the names of all our relatives, friends, and community, and dedicated the merit to them and everyone.

You can get books and CDs about the Mandala Dance from the website, and also see there more photos, and blog of the pilgrimage.

Prema Dasara will be coming to Seattle at the beginning of June, to offer a White Tara dance. And in October Parvati will lead the full mandala dance at Sakya Monastery in Seattle.

Come join us on the pilgrimage to Bali and Thailand next December. If you’re interested in having a workshop in your area, or having the Tara Dance offered at your wedding or other event, please contact us.

0
SHARES
Share
Posted Under: 2013, Dharma Healing, Arts, Spring
About the Author: Phyllis Moses
Phyllis Moses moved to the Pacific Northwest in 1999 from Maui, where the Tara Dance was “born.” Moses has been a Vajrayana practitioner since 1980, dancing with the Tara dancers since 1993. She now holds a monthly Tara circle in Kirkland, and also contributes as a health educator and yoga therapist. For more information or to be on the mailing list, contact her at: phyllis16@comcast.netPhotographers - Lama Lena, Barbara Davidson