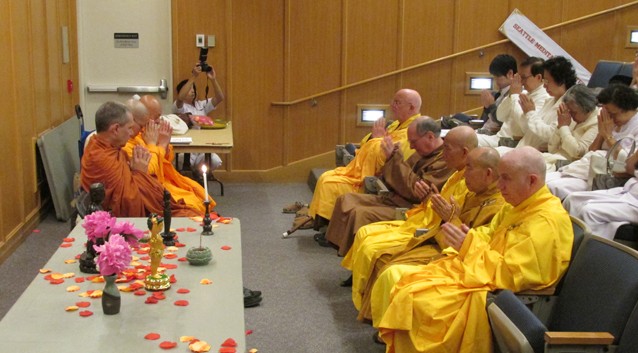 Monks chanted the praises of the Buddha, at the beginning of the ceremony.

Monks from the Seattle-area Southeast Asian Buddhist community gathered at Seattle University on June 8, to celebrate the Buddha’s life with a colorful Vesak ceremony.

Vesak is the most sacred day for the Theravada Buddhist community, honoring the Buddha’s birth, enlightenment and death.

Seven monks, and about 40 friends and supporters, commemorated Vesak with chanting and a dharma talk, followed by a candle-light procession around the Seattle University campus. The various communities distributed dharma materials, from tables set up in the Wyckoff Auditorium lobby. 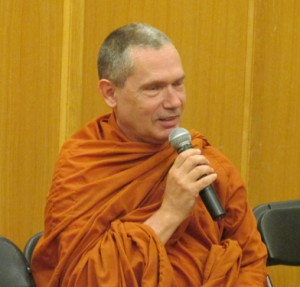 Ven. Santidhammo, from Wat Atammayatarama, said the Buddha’s kindness was the attribute most cherished by his attendant, Ananda.

Vesak is observed on the full-moon day of the lunar month Vesakha (Sanskrit), which falls in April or May. It was on this day 2,600 years ago, in the year 623 B.C., that the Buddha was born to King Sudhodana and Queen Mahamaya under an arbor of sal trees in Lumbini, in what is now Nepal.

This was also the day that the Buddha, after 49 days of meditation, at the age of 35, attained enlightenment under the Bodhi tree in Bodh Gaya. He then taught the middle way, a path of moderation away from the extremes of self-indulgence and self-mortification.

As well it was on the same day that the Buddha in his 80th year passed on, attaining paranirvana (the final deathless state) in the sal grove of the Mallas at Kushinara, between twin sal trees.

The ceremony began with a medieval Zen chant by Bill Hirsch, an ordained priest in the White Cloud Buddhist Society. Hirsch said the chant invited the Buddhas, and turned the auditorium into a temple.

This was followed by dharma talk by Santidhammo of Wat Atammayatarama, a Thai sangha in Woodinville.

In his talk Santidhammo emphasized the kindness of the Buddha, pointing out that at the moment of the Buddha’s passing, his attendant Ananda didn’t talk about the Buddha’s wisdom or his stature, but his kindness.

“The action of loving-kindness, of compassion, is selflessness in that moment,” Santidhammo said. “When we dwell in compassion and selfless love, our mind is like a god, right here.”

Following this the Theravada monks together performed the Itipiso chant, reciting the praises of the Buddha:

“Lord Buddha is the Holy One,
the Enlightened One,
the Perfect One of all knowledges and conduct,
the Well-Gone,
the World Enlightener,
the incomparable Supreme Teacher of gods and humans,
and the Awakened and Blessed One.”

The last part of the ceremony, the procession, was augmented with hand-held candles, protected by transparent globes, supplied by the Seattle Meditation Society (Dhammakaya) of Lynnwood, Wash. Here’s a video they did of the event.

The procession was led by Hirsch, at intervals ringing a chime that seemed to reverberate over the quiet grounds of the campus.

Then followed the senior monks, and behind them other participants, including members of the Seattle Meditation Society dressed in white.

We ended up back at Wyckoff Auditorium, where the candles were extinguished, reminding that just as candles burn away, so too is life temporary.

The various communities were able to distribute dharma materials from tables set up in the auditorium lobby.

This Vesak ceremony reflects the continued mission of Northwest Dharma Association to foster the mahasangha, the community of groups practicing the dharma. NWDA partnered with three Buddhist communities — Wat Atammayatarama, White Cloud Buddhist Society and EcoSangha  — to plan and present this event.

0
SHARES
Share
Posted Under: 2013, Sangha News, Summer
About the Author: Tim Tapping
Tim Tapping, a Buddhist for 20 years, practices at Sakya Monastery of Tibetan Buddhism. He teaches classes, meditation and is on the board of advisers. Tapping also serves on the board of Northwest Dharma Association as vice president.
Photos by: Steve Wilhelm