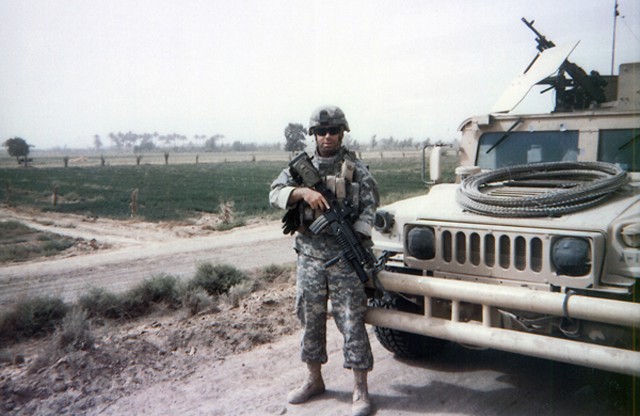 Paul Kendel with his Humvee in Iraq.

Paul Kendel, a former Georgia National Guardsman who served in Iraq from 2005 through 2006, through the depth of his view and compassion turned that harsh experience into a profound spiritual journey.

He talked about his experience, and his transformation, during a visit to Portland on April 14.

He also shared from “Walking the Tiger’s Path: A Soldier’s Spiritual Journey in Iraq,” the memoir he wrote detailing his experiences of applying meditation principles in a combat zone.

Kendel spoke at the Portland Shambhala Center, in an intimate setting of people with a wide range of ages and experiences; some veterans and many first-time visitors to the center.

I noted, when I introduced Kendel, that this visit was coming on the 10th anniversary of the invasion of Iraq.  For me this was my first time hearing personal stories from someone who was there, a special opportunity to hear about this “invisible” war, fought by so few Americans, at such a high price. 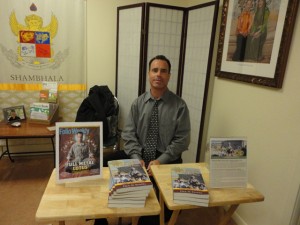 Paul Kendel selling his book at the Portland Shambhala Center, after his talk.

Kendel was not new to the U.S. Army when he deployed, as an 18-year-veteran with the National Guard, who also had a master’s degree in Middle Eastern studies.

At first he saw his deployment to Iraq as an opportunity to visit an ancient land, its monuments and culture.  But he soon learned how naïve this was, as six of his fellow soldiers were killed by a roadside bomb within his first six weeks there.

Within a matter of weeks he became disillusioned with the stated American mission “of winning the hearts and minds,” and with the aggression starting to overwhelm members of his unit.

At Shambhala he talked about how this manifested in some of the new, younger guys, some of whom had never travelled and who came from poor backgrounds and had little education. They were given high-powered weapons, told to patrol the streets and told they were the law.

Kendel told us this was a scary, insane proposition that made him feel even more isolated and cut off, elaborating on this point by reading a few graphic passages from his book.

This feeling of isolationwas what led him to pick up a book he brought with him, “Turning the Mind into an Ally,” by Sakyong Mipham.  Kendel  said he resonated with that book’s message on how to calm the mind, and how to develop an attitude of openness and empathy toward one’s self and the world.

In his own book’s preference, about his experience on the ground in Iraq, Kendel wrote that Shambhala teachings on the “Tiger’s path of discernment, the ability to be clear and aware of the emotional climate and the physical realities on the ground, were vital.”

He later wrote, “I struggled to walk a spiritual tightrope, while carrying my M4 rifle in my hands.”

Many of us in listening were touched by the rawness of the stories he told. I was impressed with his courage to be there, not to kill but to foster empathy, and to see the humanity in the middle of that hellish conflict.

The next day, Sunday, April 14, Kendel traveled with Gary Allen of the Ratna Peace Initiative, and a few volunteers from the Portland Shambhala Center, to the Oregon State Penitentiary in Salem.

There we held our monthly all-day meditation retreat, with this particular one focused on incarcerated veterans.

As Kendel told his story there, he mentioned how healing it was for him to talk about his war experiences.  He encouraged the vets  to do the same.

One Iraq veteran talked about how hard it was for him coming home.  For instance, he said that every time he would see trash on the side of the road while driving, he would quickly switch lanes, fearing a roadside bomb. In Iraq, he said, such bombs often were hidden in trash and dead animals.

The inmate and Kendel quickly connected, discovered they had been stationed in the same part of Iraq, though in different years.

During the session Allen introduced mindfulness meditation, which included discussions on its benefits for post-traumatic stress disorder, suffered by many people returning from war.

In his book, Kendel writes how he obtained support in profoundly transforming his view, despite being in the middle of the conflict, after sending an email appeal directly to the Sakyong, author of “Turning the Mind into an Ally.”

In his email, Kendal wrote, “I am constantly singled out because I prefer to see the Iraqis as human beings, rather than as nameless entities.”

0
SHARES
Share
Posted Under: 2013, Compassionate Action, Summer
About the Author: Doug McCanne
Doug McCanne is a member and teacher at the Portland Shambhala Center. He also directs the Shambhala Center's prison program at Oregon State Penitentiary. He is a longtime student of Chogyam Trungpa, Rinpoche, the founder of Shambhala International.
Photos by: Scott Courdin, Robin Kendel, Trime Persinger, John Smith