His Holiness the Dalai Lama spoke urgently of the climate-change dangers facing our planet on May 11 in Portland, but with the same sense of gracious and loving humor he always demonstrates.

His presentations, alone and with regional environmental leaders, capped off three days of public appearances in Portland and Eugene, all focused on climate change.

The event, “His Holiness the Dalai Lama: Environmental Summit,” was hosted by Maitripa College of Portland. It was followed by a Sunday group audience with Tibetan people living in the Northwest. 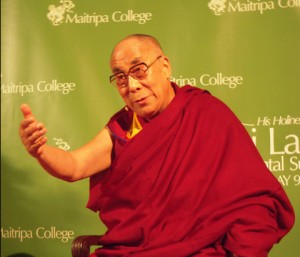 The Dalai Lama makes a point during the press conference prior to his public appearance Saturday.

In a panel on May 11, the Dalai Lama likened humanity’s plight with his own, in 1959, when he was forced to flee Tibet to escape Chinese oppression. The difference, he added, is that in the case of an eroding global climate there’s nowhere to go.

“Now with the whole world we have a problem, there’s no place else left to escape,” he said. “The moon has been an inspiration for poets, but if we try to go there to settle, it’s horrible, there’s no hope.”

“The environment is a serious matter, and indeed I am very happy that Portland has a special relationship with that,” the Dalai Lama said.

Durbin expressed gratitude for the chance to share her views, saying, “The most significant issue of my generation, and my children’s generation, is climate change. We need to change our ways, and get off fossil fuels.”

The Dalai Lama pointed to the rapidly rising global population, expected to reach 10 billion by the end of the century, as a key to the issue of global environmental degradation. 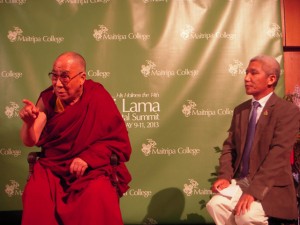 His Holiness the Dalai Lama and his long-term translator, Thubten Jinpa.

“We have to take, very seriously, the future,” he said. “Due to global warming, the north and south poles’ ice is rapidly melting, sea level is rising…Sometimes we forget long-term interest, due to greed and impatience. We have to develop new ways of life, new ways of thinking.”

He said that while he enjoys technology, humanity has to stay in harmony with our natural origins to survive.

“We must respect nature,” he said. “We think that with technology we can control nature. To some extent we can, but ultimately we are part of nature.”

But he added that he respects science, adding that sometimes science brings up new facts that will lead people to take new directions.

For instance, in his Tibetan Buddhist tradition, people centuries ago believed the world is flat. But now it’s become clear that it is round.

“We should be realistic. If new reality comes, and old thing is unrealistic, we have to change. It’s quite simple,” He said. “In my prayers, my world is a round world, not flat…In that time people had that belief, but OK, it’s not true.” 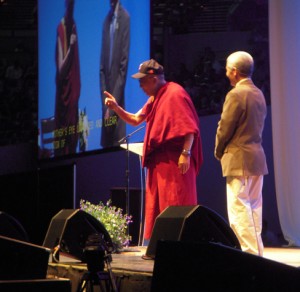 The Dalai Lama stands on the stage, during his presentation in Portland May 11.

The growing global population means that everyone can’t look to increasingly numbers of material possessions for happiness, he said.

“Think of population of 10 billion cars, where put? It’s difficult,” he said. “So from now, we have to think and carry a certain contented lifestyle. Internal wealth, inner wealth, human affection, these are most important.”

The Dalai Lama joked about the emptiness of acquisitions, saying that a new car may bring satisfaction for a few months, but that the thrill will quickly pass.

Laughing, he said, “if you buy a new car, after one month, six months, your neighbor will buy another new car, now your car looks very bad….The real source of lasting joyfulness through is through peace of mind, is on a mental level, not a sensory level.”

His thoughts on this question were echoed by Gov. Kitzhaber, who said he’d learned about a more modest lifestyle during a recent visit to Butan.

“Our economy is based on consumption, and the assumption it can go on forever, at an increasing rate,” Kitzhaber said. “Unlimited economic growth in a finite planet, is beginning to bump up against the limits of that planet.”

In response to questions, the Dalai Lama suggested that caring for the environment is an act of compassion, a spiritual practice. 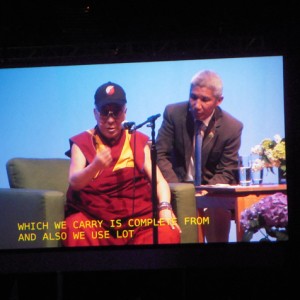 The Dalai Lama’s every expression was visible on the twin big screens in Portland.

“One unique concept in Buddhist philosophy is interdependence, inter-connectedness,” he said. “Seven billon human beings, their future is very much  interdependent. Whether we like it or not, that is the reality.”

He suggested that caring for all beings, all humans, is a worthy goal.

“The entire human species on this planet is part of me,” he said.

Too-narrow thinking, identifying just with one group, can be damaging to society and to the environment, he said.

“All sentient beings are dear to oneself, as mother sentient beings,” he said, adding that people should think about “how to build happy society on this small planet.”

“We should work together, and find ways to protect the environment,” he added.

Asked about what kinds of actions people should take to help the environment, the Dalai Lama suggested continuous activity, pointing out that the erosion of the environment can be hidden. 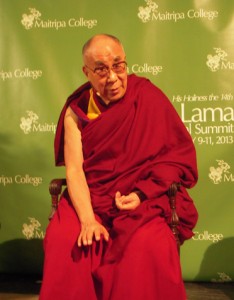 The Dalai Lama told journalists that their role is important, to investigate and communicate reality to people.

“Environmental damage isn’t as striking as damage to one person,” he said. “Some kind of preservation of ecology, should be part of daily life.”

Asked about attitude, and preventing falling into despair about the environment, especially climate change, the Dalai Lama counseled wisdom.

“If there is tragedy you can’t change, just accept,” he said. “If something has failed, but there are other options, then make effort there.”

He said it’s possible to be aggressively active without becoming negative.

“Anger out of a sense of concern is positive. Sometimes with the help of intelligence, it can be positive,” he said. “Anything with a strong sense of self to harm others is negative. But a strong self of self, will power, is important to extend a sense of compassion.”