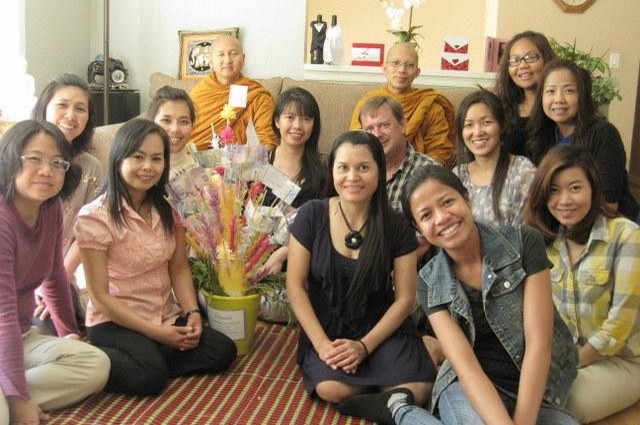 Two of the monks gather with temple women.

But he’s doing in it a somewhat less-driven way, having learned from the nine-year campaign to build the $2 million temple building at Atammayatarama, often referred to as Atammma.

“With so much money we were thinking about fund-raising all the time. We don’t want to do that, just go slowly,” he said. “I am tired with building this one…it took a long time.”

He adds that he’s also gained more faith that if the dharma comes first, wherewithal to build facilities will follow.

“We want to do more teaching to the people,” he said. “When you’re teaching, the people are understanding, the money will come in later.”

The Woodinville monastery is built on five acres north of the town of Woodinville, and serves several hundred lay Thai and Western families in north King County and Snohomish County. Six months are in residence.

Ajahn Ritthi initially founded the Vancouver center, called Buddhapanyanuntarama Buddhist Monastery, in a rented house in 2008. The name means “Wisdom of the Buddha,” he said.

The temple is in the Mahamikahya school of Thai Buddhism, and complements another Thai temple, in another school, already in the Vancouver area.

After two years the home owners decided to sell the house, so instead of moving to another rented place temple supporters decided to buy the house, and use this as a mechanism to buy a larger temple building later.

“We bought a house, we can save money,” Ritthi said. “After that can sell the house, and buy the church.”

The current two-story building is modest, with space for a small shrine room, and living quarters for the five resident monks, said Ritthi. The shrine room has space for 30 people, enough for weekly events, but the center has to rent space for up to seven major Buddhist holidays, when up to 300 people can come.

While the monastery is focused on the Thai community, in actuality people with roots in many other Southeast Asian countries come, he said.

“We try to do like in Wat Atamma, welcoming people from many different countries, many Lao, many Cambodians,” he said.

As Buddha Punyanuntarama has been growing, and now has about 300 members, Ajahan Ritthi and supporters are now looking for a church, or a commercial space, to turn into a more permanent temple.