The members of Portland’s Bright Way Zen have fulfilled their dream of getting a dedicated space.

The new location, on Portland, Ore.’s west side, is near the city of Beaverton and also serves the surrounding areas of Hillsboro and Aloha.

For the last four years, Bright Way Zen has met in a space that was generously donated by Christ United Methodist Church in Cedar Mill, west of Portland. Bright Way members turned a classroom at the church into a zendo, and even set up their meeting space in the church’s pre-school classrooms. Bright Way members would move their materials to another building for one-day retreats.

“I could fit pretty much everything we needed for normal practice in my Prius, with mediation cushions packed to the roof,” said Bright Way member Sean Graham. “Two or three of us could bust out a zendo in about 20 minutes.” 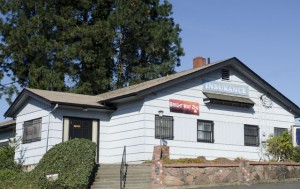 The zendo, on the west edge of Portland, also houses an insurance company.

Bright Way’s new home is in a free-standing building that also houses a Farmer’s Insurance office. It’s tucked away between a wetland and some land owned by Portland General Electric, but despite all the development around, it will remain quiet.  (Except for the traffic noise, which is a little like listening to a stream).

The zendo currently offers 25 seats and can accommodate 30 when needed, and also has use of the common areas outside the zendo: a foyer for coats, two bathrooms, and a room for sanzen (one-on-one meeting with the teacher).

Soon after signing the lease in February and then moving in, Bright Way expanded beyond their previous Tuesday evening meditation to add a weekly Sunday morning meditation and chanting service.  Members hope this will make the practice more accessible to many people.

“Prior to the move…I felt that BWZ was transient,” Graham said. “While I know all things are impermanent, it is still nice to have a more ‘permanent’ place to practice.  It also allows us to have some things we could never move around, like a densho bell.”

Bright Way is directed by Domyo Burk, who trained for 15 year primarily at the Dharma Rain Zen Center in Portland. She became a Zen monk in 2001, received authorization to teach from Gyokuko Carlson Roshi in 2010, and resigned from Dharma Rain in 2011 to lead Bright Way. 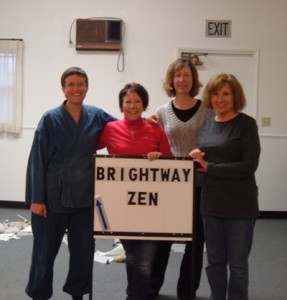 “Even when we are not there, we hold it in our hearts as a place of refuge,” said Domyo Burk about the new center.

Making the decision to move into a leased space wasn’t easy for the organization, which felt financially constrained. But the board realized a dedicated space would allow Bright Way to offer an additional practice day of the week, potentially reaching new people. In addition, there would be minimal setup and take down, as well as not having to worry about schedule conflicts with the church.

Domyo Burk looked around for places of about 1,000 square feet, and figured it was going to cost them about $1,000 a month or more, which they wouldn’t be able to afford for a long time.

Then board member Jeff Young suggested Bright Way shouldn’t worry too much about size and the ability to accommodate growth, but instead should look for a smaller space where Bright Way could have several smaller meetings a week. The important thing, he said, was the space belong to Bright Way.

With this change in view the Bright Way board recognized the possibilities in a new place one saw on Craigslist, which indeed was smaller but which cost about half what they had feared they would have to pay.

Bright Way had some money in savings but knew our monthly income, as of January, 2013, would not have covered expenses with the new rent. 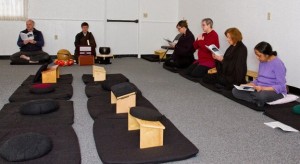 Using Crowdtilt.com, a web-based crowd-funding site, the board raised an additional $2,489 to cover the gap between our current income and our expenses with this rent for an entire year! That meant we could sign the lease, move in, and then develop and grow in the new space for a whole year without worrying about not being able to pay bills.

The board is confident, however, that during the course of a year the community’s income will grow at least enough to cover costs. By this January monthly income had risen to $650 from just $50 monthly the year before, and by next January the sangha will only need to raise $880 monthly to pay the bills.

A weekly weekend practice meeting promises to make Bright Way Zen more accessible to many people, so this will be a significant opportunity for growth.

Since its founding in 2008, the group has grown in size and maturity of practice. Bright Way now hosts one-day meditation retreats multiple times a year, and also officiates “Jukai” ceremonies, where members formally became Zen Buddhists. Bright Way is run by a board of directors, and has formally incorporated as a nonprofit.

0
SHARES
Share
Posted Under: 2013, Sangha News, Summer
About the Author: Susan Maginn
Susan Maginn has practiced with Soto Zen communities for the past 10 years, and has been a member of Bright Way Zen since 2012.
Photos by: Trish Carr, Jim Prelack, Jeff Young