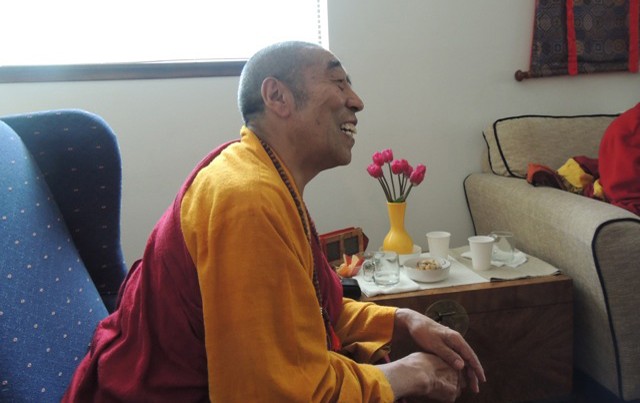 Lama Sonam Tobgyal Rinpoche, during a break in the Seattle teachings.

At the end of April 2013 the Tibetan lama Sonam Tobgyal Rinpoche came from the Riwoche Tibetan Buddhist Temple in Toronto, to teach “The Three Statements that Strike the Vital Points” in Seattle.

This teaching is considered, in the Nyingma Buddhist tradition of Tibet, to be one of the most profound teachings on the nature of the mind. The text and commentaries on it are now available in publications and on the internet, but in Tibet the instruction is still only given to a chosen few. 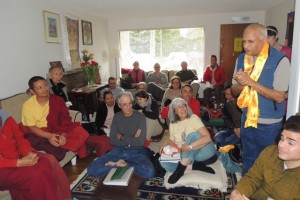 Host Ceon Ramon expresses gratitude to Sonam Rinpoche, on behalf of the group, after the teachings.

Coincidentally, I was translating for this same teaching two weekends later in Orange County. The Nyingma Rinpoche who taught there, who lives in Tibet, specified that everyone who attended had to recite the hundred-syllable Vajrasattva mantra 15,000 times before coming, which indicates how the Tibetan tradition views this teaching.

Mary Heiny, a Japan-trained master of Aikido who lives in Seattle, and who in 40 years of teaching Aikido has founded several dojos, organized Rinpoche’s visit. She has been a pupil of Rinpoche for more than 20 years, and has brought him a number of times to Seattle since 2001.

About 20 people gathered for the two days of teaching in the pleasant setting of the north Seattle home of Ceon Ramon, who specializes in brain research at the University of Washington. Ramon has studied Tibetan Buddhism since the ‘70s, and is himself fluent in Tibetan. 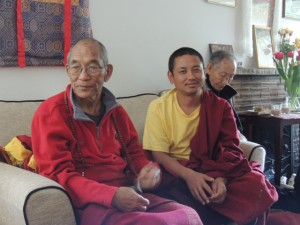 Three distinguished Tibetans attending the teachings were Lama Lodro, who has practiced a total of 24 years of retreat, on a visit from Chatral Rinpoche’s monastery in Nepal; Lama Tashi, from the Nithārtha Institute in Seattle; and Geshe Ngawang Nornang, who has been resident in Seattle since 1963.

Three other Tibetan lamas were present for the teaching: Lama Lodro, who has practiced a total of 24 years of retreat, on a visit from Chatral Rinpoche’s monastery in Nepal; Geshe Ngawang Nornang, who has been resident in Seattle since 1963; and Lama Tashi, from the Nithārtha Institute in Seattle.

Khenpo Sonam Tobgyal Rinpoche, who offered the Seattle teachings, was born in the eastern region of the Tibetan plateau. At the age of five he became a monk in the renowned Riwoche temple, which was the eastern Tibetan center for the Taklung Kagyu school of Tibetan Buddhism.  During the suppression of Buddhism in Tibet in1959 he managed to escape to India, in spite of being captured once on the way.

Rinpoche subsequently came to Canada, first to the Yukon and then to Toronto, where he has established the now-flourishing Riwoche center.

The Taklung is one of a number of Kagyu schools and dates back to the 12th century, when it was founded by Taklung Tashi Pal (1142-1210).  The tradition maintains the teachings of Marpa Lotsawa (1012-1097), to whom the Kagyu school traces its origins, his famous pupil Milarepa (1040-1132), and the monastic tradition established by Milarepa’s pupil Gampopa (1079-1153). 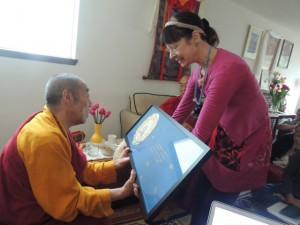 Airdrie Thomsen offers Rinpoche a painting of Yeshe Tsogyal, with the mantra of Guru Rinpoche.

In addition to its own unique heritage the lineage also includes Rechung Kagyu teachings introduced from India by Milarepa’s principal pupil Rechungpa (1084-1161). It has also adopted the practices of the Longchen Nyingthig from the Nyingma school, which is the source of the teaching on the three statements.

The three statements are: “Recognize your own nature,” “attain single certainty,” and “gain confidence in the process of liberation.”

The text’s title is literally just three words, also considered to mean view, meditation and conduct. The term hitting or piercing the vital points comes from the Sanskrit word marmavadhana. This can mean to hit a mortal blow to the enemy, as well as getting to the central point of a matter.

Thus the title is explained to mean pointing out the central meaning of view, meditation and action, as well as a method that destroys the three principal mind-poisons. 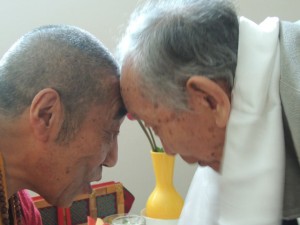 Lama Sonam and Geshe Nornang exchange blessings after the teachings.

Garab Dorje’s “Three Statements that Strike the Vital Points” is found amongst the termas, or revealed dharma treasures, of Longchen Rabjam (1308-1364), the most significant figure in the development of the Nyingma tradition.

The “Three Statements that Strike the Vital Points” are a core text in the Dzogchen tradition, and their author, Garab Dorje, is considered the first Dzogchen master, and the source of that lineage.

If one disregards the legends of centuries-long lifetimes, Garab Dorje, or Surativajra, the most plausible original Sanskrit form of his name, appears to have been active in the early eighth century. His pupil’s pupil, Śrī Singha, was still active towards the end of that century, helping with the translation of Garab Dorje’s commentaries.

In Longchenpa’s terma it is said that after Garab Dorje died he reappeared within a sphere of light to his pupil Mañjuśrīmitra, and gave him a tiny casket made of moonstone, the size of a fingernail. Inside it was this teaching of the three statements written in lapis lazuli ink. 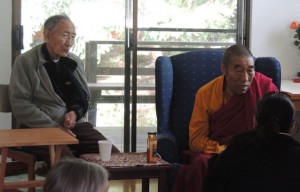 Lama Sonam listens to Dachen Kyaping who attended the teachings, while Geshe Nornang looks on.

In Seattle, Sonam Tobgyal Rinpoche began the two days of teaching, in his calm and comforting voice, with an extract from Khenpo Gangshar’s teachings on the nature of the mind.

As is now usual the instructions Rinpoche then gave were not from the actual brief “Three Statements that Strike the Vital Points” text, but from the commentary upon it written by Dza Patrul Rinpoche (1808-1807).

The commentary, entitled “The Special Dharma of the Wise Glorious King,” is in both a concise verse and expanded prose version. In four sessions Rinpoche gave a clear exposition of the entire text.

Khenpo Sonam Tobgyal Rinpoche will return again to Seattle to give further teachings at the end of April or beginning of May in 2014.

0
SHARES
Share
Posted Under: 2013, Dharma Education, Summer
About the Author: Peter Alan Roberts
Peter Alan Roberts began learning Tibetan at Samye Ling in Scotland in 1976. For 30 years he has translated for lamas from all schools, especially for Thrangu Rinpoche. He has translated several books by Thrangu Rinpoche, including “The Practice of Tranquility and Insight,” “Ocean of the Ultimate Meaning: Teachings on Mahamudra,” and Rinpoche’s compilation of primary Kagyu texts: “Mahāmudra and Related Instructions: Core teachings of the Kagyü.”
Photos by: Peter Alan Roberts