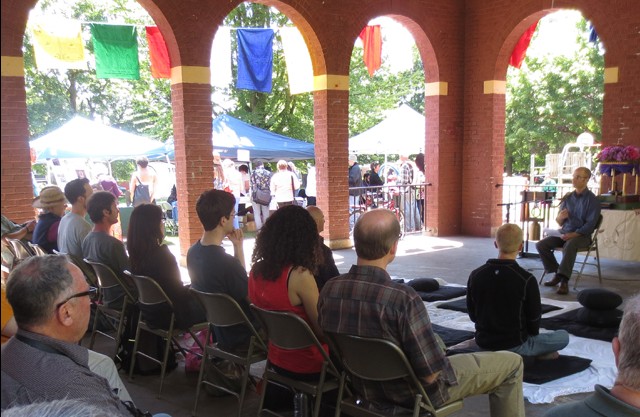 Dan Rubin, a psychologist and member of the Portland Shambhala Center, was the keynote speaker for the day. Rubin spoke about mindfulness of joy, and about the importance of not taking ourselves too seriously.

Like a cloud in the sky, the 10th annual Portland Buddhist Festival passed through Colonel Summer’s Park on the first day of June.

The event was an opportunity for many different Buddhist sanghas to celebrate the diversity of their traditions, and for the general public to learn more about Buddhism.   The primary sponsor was the Portland Chapter of the Buddhist Peace Fellowship.

The festival went from 11 a.m. to 4 p.m., and featured events including a keynote talk, workshops, a bathing-the-Buddha ceremony, a sing-a-long, and much more. Here are more photos.

A children’s pavilion offered games and activities, and a scavenger hunt encouraged the children to explore the different tables and exhibits organizers had placed around the park.  About 20 different groups set up tables, and those tables provided opportunities for the public to learn more about the groups, ask questions, and obtain flyers or other literature.

The participating groups represented many different Buddhist traditions including Zen, Tibetan, Pure Land, and even some groups not connected to a specific Buddhist lineage.

The Oregon Buddhist Temple, a Jodo Shinshu Pure Land Buddhist group, provided a lot of support for the festival. They hosted all of the planning meetings, provided some of the large structures such as the children’s pavilion, and they set up the sound system. Twenty  groups had a table or provided sponsorship for the event. 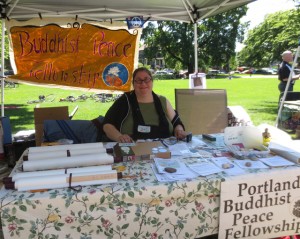 In addition to the Buddhist groups, several vendors sold products at the festival.  Four carts offered food, people at two booths sold meditation supplies such as cushions and bells, and a booth offered Tibetan products.  Organizers limited the number of vendors, so the festival would not become too commercialized.

The keynote talk was given by Dan Rubin, a local psychologist and a member of the Portland Shambhala Center.

Rubin discussed his insomnia, which he described as ironic. He said it’s ironic because while he aspires to wake up in his life, not being able to sleep has been a problem for him. Rubin identified what he called “mindfulness of joy” as one way through insomnia.   This joy includes being grateful for one’s life and the good fortune one has, he said, and it also involves having a sense of humor and learning laugh at oneself. 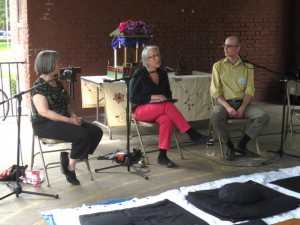 Rubin’s talk was quite funny at times, and many in the audience seemed to relate to being unable to sleep, and how crazy it can make the mind.

Charley Reneau, from the Oregon Buddhist Temple, described ways to be more awake and present with daily life. He talked about the “flow state” a person can achieve in daily activities, where one is focused on doing just one thing at a time.

Nelly Kaufer of the Pine Street Sangha described what she called “recollective awareness” meditation.  This style of meditation emphasizes an open curiosity about one’s experience, and does not require the use of one specific meditation object.  Instead of continually returning attention to the breath, for example, meditators are invited to examine and explore whatever state of mind is present, giving up the need to control or change their state of mind. 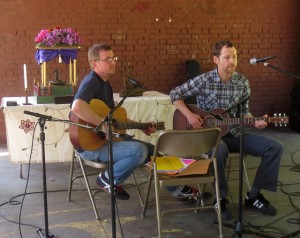 Jacobsen said that the Shambhala teachings have much relevance for lay practitioners in the West, who work in jobs and raise families.

The Portland Buddhist Festival was founded 10 years ago by the Portland Chapter of the Buddhist Peace Fellowship.

The purpose of this organization is to serve as a catalyst for socially-engaged Buddhism.  This can mean different things to different people, but generally it encourages practitioners to take compassionate action in the world, and to participate in movements for social justice, environmental sustainability and peace. 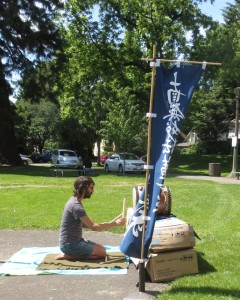 The sounds of a Japanese temple drum floated over the festival grounds.

Heidi Hoogstra, a practitioner at the Dharma Rain Center, has been the main coordinator for the Portland Chapter of the Buddhist Peace Fellowship, and was the primary force behind this year’s festival.

When asked why she wanted to create this festival, Hoogstra said, “Buddhism saved my life. I want to give back. This is a wonderful way for people who are Buddhist in Portland to get together and for people who don’t know about Buddhism to get informed a bit.”

She added, “I feel lucky that in Portland we have so many offerings—so many different types of Buddhism.”

0
SHARES
Share
Posted Under: 2013, Sangha News, Summer
About the Author: Jeff Kerr
Jeff Kerr is a member of the Portland Community of Mindful Living, a group of sanghas in the tradition of Thich Nhat Hahn. He is also a former board member of Northwest Dharma Association, and former outreach coordinator for the group.
Photos by: Jan Van Raay